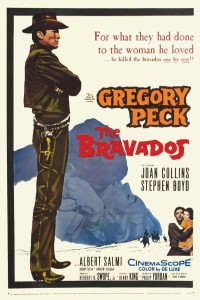 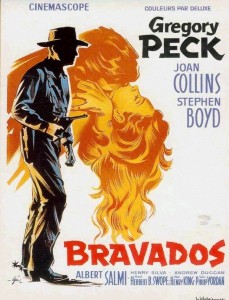 A revenge/manhunt story.  Gregory Peck is Arizona rancher Jim Douglass, who has spent the last six months tracking down four miscreants (as he puts it, “two white men, a half-breed and an Indian”).  Now they have been caught while robbing a bank in the small town of Rio Arriba and are to hang.  Douglass, who has been hunting them for raping and killing his young wife while robbing his isolated ranch, comes to witness the hanging.

One of the two white men, the leader Bill Zachary (Stephen Boyd), admits to having a weakness for women; the other, Ed Taylor (Albert Salmi), is a backshooter with a fondness for cards.  The halfbreed is Alfonso Parral (played by Lee Van Cleef), and the Mexican Indian Lujan is played by Henry Silva.  They’re all good in these roles, playing bad guys. 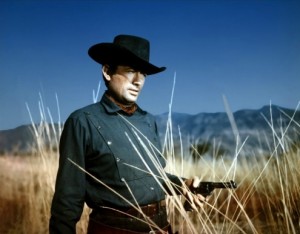 In Rio Arriba, Douglass encounters Josefa Velarde (a young Joan Collins) whom he had earlier met in New Orleans and had asked to marry him.  She’d turned him down and now regrets that decision.  The hangman, Mr. Sims (future stooge—of the Three Stooges–Joe DeRita), turns out to be a fake and a confederate of the four outlaws.  He is killed in helping them to escape, and he almost kills the sheriff.  The escapees also take along as a hostage the daughter of Steinmetz, the Jewish general store owner.

Douglass joins the posse, and it quickly becomes clear that he’s the best manhunter among them.  Initially, the outlaws leave behind one of their number to hold a pass and slow down the posse.  He rejoins them, and now that they’ve identified Douglass as a particular threat, they leave Parral behind to ambush Douglass.  It works the other way around and Douglas ruthlessly kills the halfbreed, although the death isn’t shown.  Next it’s Taylor who’s left behind to get Douglass, but that doesn’t work any better and Douglass captures and kills him, too. 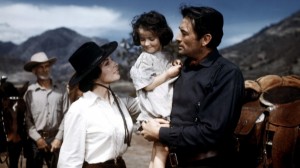 Douglass, reconstituting his family, but with Joan Collins’ Josefa Velarde this time.

Meanwhile Zachary and Lujan with their captive Emma Steinmetz (Kathleen Gallant) have arrived at the cabin of a prospector, John Butler (Gene Evans), only four miles from Douglass’ ranch.  While there, Zachary kills Butler, Lujan grabs a leather bag of money from him, and Zachary rapes Emma.  As the posse (now including Josefa) closes in, they find Butler’s body and the sobbing Emma in the cabin.

Urged on by Josefa, Douglass’ determination is renewed.  The two remaining outlaws have stopped at Douglass’ ranch and taken the last fresh horses.  The posse comes to the Rio Grande and has to stop there, except for Douglass.  Crossing into Mexico, he finds Zachary at a cantina in San Cristóbal and shoots it out with him, killing him and just missing Lujan, who flees on horseback.  Douglass tracks Lujan to the remote cabin where he lives with his wife and sick son.  There Douglass sees the leather sack with the loot and recognizes it as what was robbed from his ranch months ago.  Since Lujan took it from Butler, it’s now obvious that Butler raped and killed Douglass’ wife, not the four outlaws he’s been tracking for months and has mostly killed.  Back in Rio Arriba, he’s hailed as a hero but he seeks comfort and perhaps absolution from the Catholic priest, played by Andrew Duggan.  And he finally gets together with Josefa. 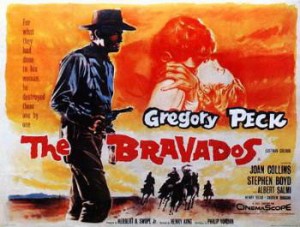 The plot has some similarities with John Ford’s The Searchers:  a relentless, even obsessive, hunt for killers, with the focus on the effects of the hunt for revenge on the hunter.  What will be left of him when the hunt is done?  The story is a grim one.  Peck is fine as Douglass, the outlaws are persuasively rotten and most of the townspeople of good in their roles.  Young British Joan Collins’ acting skills are limited, especially in her passionate speech when she finds the violated Emma and urges Douglas to kill them all, and her accent is slippery.  In color, highly watchable, with Leon Shamroy as cinematographer.  Shot on location in Mexico   Music by Alfred Newman.  Based on a story by Frank Rourke.

Henry King had been directing movies for a long time, since 1915 in the early silent era.  He’d already been an actor-director for ten years when he made The Winning of Barbara Worth (1926), with Ronald Colman and Vilma Banky–and the first notable movie for bit player Gary Cooper.  And he’d directed Gregory Peck in one of his previous best westerns, The Gunfighter (1950).