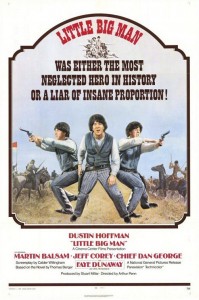 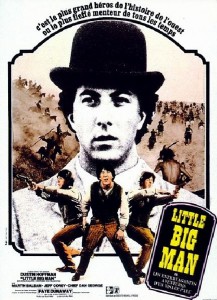 “I am, beyond a doubt, the last of the old-timers.  My name is Jack Crabb.  And I am the sole white survivor of the Battle of Little Big Horn, uh, uh, popularly known as Custer’s Last Stand.”

This is one of the two most prominent revisionist westerns of the early 1970s, together with McCabe and Mrs. Miller.  Both were made by directors who did not otherwise direct many westerns, and both were concerned more with the “revisionist” than the “western.”  Both were inundated in the social currents of their time and using the western format to express them.

Based on a 1964 novel by Thomas Berger, this is one of those westerns that uses its main character as a ping-pong ball to bounce around the west of the post-Civil War era meeting actual famous characters from history and fictional characters meant to be picaresque (as with some of the works of Larry McMurtry, for example, or Forrest Gump).  Even the actual historical characters in this have a lot of the fictional about them. 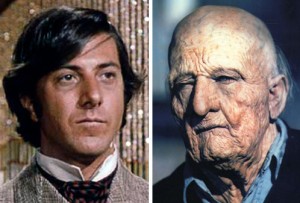 As the movie starts, Jack Crabb (Dustin Hoffman), 121 years old and in heavy makeup, reminisces about a period of his life as a young man when he alternated between living among the Cheyennes and white men.  The entire movie is a flashback to that period of his youth.  On the whole, the movie tends to be more successful in its depiction of the Cheyennes than when it deals with white men, who are usually shown as venal, hypocritical, dishonest or crazy.

As a boy, Jack is taken by Cheyennes and raised by Old Lodge Skins (Chief Dan George), whom he addresses as Grandfather.  The most successful single aspect of the movie is its depiction of the Cheyennes, who refer to themselves as the Human Beings, and their culture.  They are not quite as authentic-seeming as, say, the Lakota Sioux in Dances With Wolves, but the portrayal is engaging.  Jack makes friends, but some enemies, and he becomes a warrior despite extraordinary ineptitude and receives the name Little Big Man. 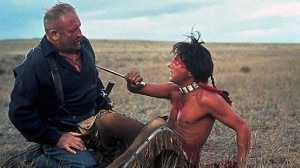 Crabb is taken for a Cheyenne on the battlefield, understandably enough.

After a battle with white soldiers, he is taken back to white society, where he is adopted by the Pendrakes, an outwardly religious couple in which the wife (Faye Dunaway) seems obsessed with sex.  Jack refers to this as his “religious period,” and he meets his real sister Caroline, a Calamity-Jane type, who teaches him to shoot a gun, whereupon he enters his “gunfighter period” and meets Wild Bill Hickok (Jeff Corey).  Jack seemingly has the skill but not the temperament for gunfighting.  He’s never good at any kind of fighting.

Jack takes a Swedish wife Olga and starts a dry goods store with a partner who turns out to be a thieving scoundrel.  Responding to impromptu advice from Gen. George Custer (Richard Milligan), they head west, only to have their stagecoach attacked by Cheyennes.  Olga is abducted, and Jack goes to the Cheyennes in search of her.  Captured by whites again, he becomes a muleskinner for Custer until Custer’s attack on the Cheyennes, where Custer and his men indiscriminately kill women and children.  Jack discovers a young Cheyenne widow Sunshine (Aimee Eccles) giving birth, and she becomes his wife, along with her three widowed sisters.

Old Lodge Skins has become blind, but he still has prophetic dreams and powers that enable him and Jack to survive another Custer massacre, this time on the Washita.  Sunshine, her child, and her sisters are all killed.  Jack makes his way to Custer’s camp, intending to kill him, but he loses his nerve and becomes instead the town drunk in Deadwood.  Wild Bill Hickok gives him money to clean up but is himself killed.  Jack finds Mrs. Pendrake working as a prostitute.  “Well, Jack.  Now you know.  This is a house of ill fame.  And I’m a fallen flower.  This life is not only wicked and sinful.  It isn’t even any fun.” 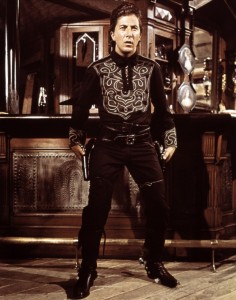 Crabb in his gunfighter phase.

After a period as a hermit and trapper, Jack spots Custer’s cavalry on the move and joins them as a scout.  Custer figures he can believe the opposite of what Jack tells him as they head for the Little Bighorn.

General Custer:  “You’re advising me to go into the coulee?”

General Custer:  “There are no Indians there, I suppose.  ‘

Jack Crabb:  “I didn’t say that.  There are thousands of Indians down there.  And when they get done with you, there won’t be nothing left but a greasy spot.  This ain’t the Washita River, General, and them ain’t helpless women and children waiting for you.  They’re Cheyenne braves, and Sioux.  You go down there, General, if you’ve got the nerve.” 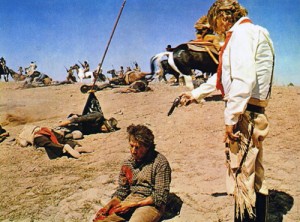 With Custer at the Last Stand.  Note the large back pad on Richard Mulligan as Custer.  He’s about to get a couple of arrows in the back.

Jack is standing next to the demented Custer during the last stand and is saved by a Cheyenne friend-enemy.  Back at the Cheyenne camp, Jack accompanies Old Lodge Skins to a mountain top, where the old man intends to die.

[Old Lodge Skins, who has laid himself down to die, wakes up as it starts to rain.]

Old Lodge Skins [opening his eyes]:  “Am I still in this world?”

Old Lodge Skins:   [groans] “I was afraid of that.  Well, sometimes the magic works.  Sometimes it doesn’t.”

They return to dinner.  And Jack dismisses the oral historian with whom he has been sharing all this, to be left alone with his memories.

This has been a long synopsis, but it’s a long movie at 139 minutes, with a lot of back-and-forth between Indians and whites for Jack.  Dustin Hoffman is good as Jack Crabb, and his old-man makeup for the framing story was innovative for its time.  The best performances in this film are by Chief Dan George (nominated for a Best Supporting Actor Oscar) and Aimee Eccles as Sunshine.  (Marlon Brando, Paul Scofield and Lawrence Olivier had turned down the Old Lodge Skins role, according to reports.)  Chief Dan George was even more excellent as the Cherokee Lone Watie in The Outlaw Josey Wales, and Aimee Eccles was cast as Bert Lancaster’s young Apache wife in Ulzana’s Raid, although she hardly appears on screen.  While this movie’s depiction of the Cheyennes is not entirely authentic, it is entertaining and more real than movies had tended to be previously. 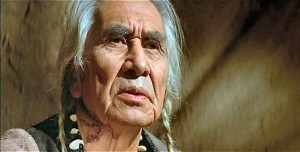 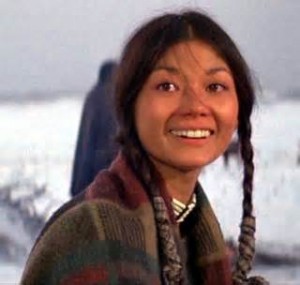 Its treatment of Custer and the flow of events generally is much more cavalier.  Washita (1868) and Little Bighorn (1876) appear to be only months apart.  In fact, they were eight years apart.  The lunatic Custer on the battlefield is intended to be satiric, not accurate.  The anti-military feeling is pure 1970s, although it is surprisingly similar to Dances With Wolves more than twenty years later.  How much you enjoy this movie will depend on how you feel about the 1970s as a film era generally.

This and Bonnie and Clyde (1967) are generally seen as the high points of Arthur Penn’s directing career.  Little Big Man‘s revisionism was not universally well-received on its release.  Vincent Canby of the New York Times complained that the film “wears its social concerns so blatantly that they look like war paint.”  Pauline Kael, who had championed the violent Bonnie and Clyde, thought that Little Big Man was a “hip epic” and “just crude, ideological filmmaking.”  However, it was generally a critical and box-office success in 1970.  More than 40 years later there seems to be a little creaking in the Vietnam-era joints.

In the novel, the old Indian dies at the end.  Penn deliberately decided against playing it that way.  “We thought long and hard about this and in the first draft of the script he does die, but this death would have introduced an element of sadness into the film and we didn’t want this.  The film would have become dramatic, even melodramatic, instead of being picaresque.  I also wanted to show that not only were the Indians going to be destroyed, but they were also condemned to live.  On the whole, audiences like their entertainment dramatically compact and homogenous, but I want the opposite.  A film should remain free and open, not with everything defined and resolved.” 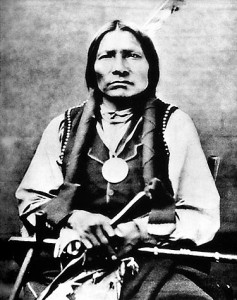 Historical Note:  The real Little Big Man was not a Cheyenne or a white man, but an Oglala Sioux, related to Crazy Horse and involved in his death at Fort Robinson in 1877.