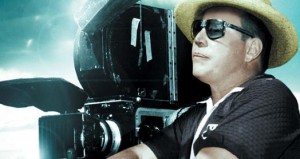 “Boetticher is one of the most fascinating unrecognized talents in the American cinema…Constructed partly as allegorical Odysseys and partly as floating poker games where every character took turns at bluffing about his hand until the final showdown, Boetticher’s Westerns expressed a weary serenity and moral certitude that was contrary to the more neurotic approaches of other directors on this neglected level of the cinema.” – Andrew Sarris, The American Cinema, 1968.  This was written long before the second wave of recognition for Boetticher’s work, at a time when he could accurately be called an “unrecognized talent.”

In 1950 Randolph Scott was exclusively appearing in western movies, and he was quite successful at it:  he was the biggest box-office star in the country.  Already in his 50s with his investments doing well, he was looking at the downhill side of his career.  By the mid-1950s the domestic grosses on his westerns were falling.  What he didn’t know was that his very best work in westerns was still ahead of him, thanks to Budd Boetticher and Sam Peckinpah. 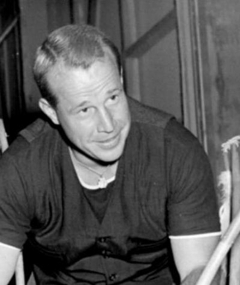 Oscar Boetticher, Jr., was born in 1916 and grew up in Evansville, Indiana.  A star athlete at Ohio State, he traveled to Mexico after graduation.  There he developed an interest in bullfighting and a lifelong affection for the country.  A chance encounter with director Rouben Mamoulian led to a job as a technical adviser (on bullfighting) in the 1941 movie Blood and Sand.  He got his directing break ten years later when John Wayne’s production company Batjac asked him to direct The Bullfighter and the Lady, which he did using the name Budd Boetticher.  It earned him an Oscar nomination for Best Original Story.

Soon after, he moved to Universal, where he made The Man from the Alamo, the 3-D western Wings of the Hawk and the World War II movie Red Ball Express.  In 1955 he made another bullfighting movie, The Magnificent Matador, beginning a frequent collaboration with cinematographer Lucien Ballard.  And he directed the first three episodes of the television series Maverick. 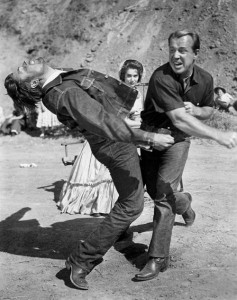 Julie Adams watches Budd Boetticher direct a punch at a stuntman while filming The Man from the Alamo (1953).

Around that time Batjac had been developing a script by Burt Kennedy as a vehicle for John Wayne.  But when Wayne opted for The Searchers instead, the property was passed on to Boetticher.  He directed Seven Men from Now in 1956 with Randolph Scott, Lee Marvin and Gail Russell, and it began one of the most productive collaborations in the history of westerns:  the seven films of the Ranown cycle.  Ranown was the production company formed by Scott and his producing partner Harry Joe Brown; since Seven Men from Now was produced by Batjac, it is not actually part of that cycle, although it is often lumped together with them because all the other major elements of the team (director, star, writer) are the same. 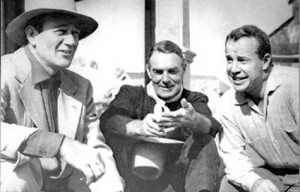 Boetticher with a couple of actors (John Wayne and Randolph Scott).

The Ranown productions were not large-budget movies, but they are tightly constructed, mostly filmed at Lone Pine and work well in terms of storytelling  In addition to being produced by Ranown and directed by Boetticher, they all star Randolph Scott, who was 58 when Seven Men was filmed, and the best of them were written by Burt Kennedy.  Shot between 1956 and 1960, the four best of them are Decision at Sundown, The Tall T, Ride Lonesome and Comanche Station.  They also include Buchanan Rides Alone and Westbound.  Viewed as modest successes in the U.S. at the time they were released, they were accorded more cinematic respect in Europe, particularly in France.

In 1960 Boetticher made a gambler-gangster movie The Rise and Fall of Legs Diamond and then disappeared south of the border into Mexico for much of the 1960s, trying to make a documentary on bullfighter Carlos Arruza.  The productive part of his directing career was over.  His last movie was A Time for Dying, also Audie Murphy’s last film.  Boetticher provided the story for Don Siegel’s Two Mules for Sister Sara. 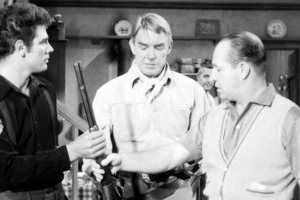 His best work was not widely seen in the U.S. after its initial release.  Batjac owned the rights to Seven Men from Now, and, like Hondo, kept it largely off television.  But with the coming of the DVD age, both Seven Men and the Ranown cycle of movies became more widely available and Boetticher, who had always been the center of a cult among western aficionados, became more widely known.  His teaming with Randolph Scott ranks with the John Ford-John Wayne and Anthony Mann-James Stewart pairings for the excellent westerns that resulted from it.  His career was shorter than others of the great directors, but it resulted in a remarkably compact and consistent body of work.  He died in 2001.

Visually, Boetticher’s best films were shot at Lone Pine, a desolate semi-desert landscape near the Owens Valley in southern California where many westerns had been shot going back to Roscoe Arbuckle and The Round-Up in 1920.  They are spare and clean, just as the stories are, without many close-ups or long shots, using mostly medium shots.  However, both Ride Lonesome and Comanche Station begin with a long shot of a single rider in the rocks–the sort of thing Sergio Leone would borrow for the initial shot of For A Few Dollars More.

Decades after his amazingly productive period in the late 1950s, Boetticher was asked about his working methods, particularly with screenwriter Burt Kennedy.  “With the real Scott pictures [the Ranown westerns], Burt [Kennedy] and Randy [Scott] and Harry Joe [Brown] and I had complete control and we all thought alike.  It was a pleasure because I had the best cameramen, who were my friends, and I had a producer I really liked because he didn’t bother me, Harry Joe Brown, and I don’t think there was ever a finer gentleman in the picture business than Randolph Scott.  And where John Wayne had a completely different attitude with young actors who were in his pictures, Randy would say ‘I sure like that young fellow,’ like James Coburn, ‘let’s give him more lyrics.’  In every picture I made with him, with the exception of Westbound [where they didn’t have control over the script], we made a star because Randy and Burt and I wanted to make a star.  And look at the list:  Lee Marvin, Richard Boone, Craig Stevens, Pernell Roberts, James Coburn, Claude Akins.”  It becomes clearer from his comments that he worked with a remarkably talented and congenial small team.  What he’s describing only works if the team has control, everybody is very capable and everybody trusts everybody else.  That elusive kind of lightning struck for him, Scott, Kennedy and Brown for five years, and then it was gone. 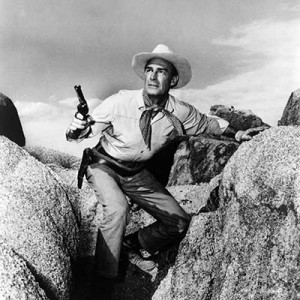 Randolph Scott in The Tall T.

“I would read his [Burt Kennedy’s] scripts and die laughing and be excited and call him and say, ‘Jesus Christ, this is really wonderful.’  That’s our preparation.  I got a great script and I shot it and I added to it.  That’s what a director is supposed to do.  If you take a good script and you can’t make it better, you’re not a very good director.  The writer has done everything he possibly can do to make it a good script.  Now, he delivers it to you, it should be to the best of his ability.  You’ve got weeks after that even before you’ve got to shoot, supposedly, where you can take a good piece of work and say, ‘Gee, I can improve it a little bit here, a little bit here, a little bit there,’ but that’s what directors should do.  We didn’t all get together like they do today and have meetings and say, ‘What do you think we ought to do next?’  We knew what we were going to do.  We made those Scott pictures in 18 days.  Three weeks, six days a week. 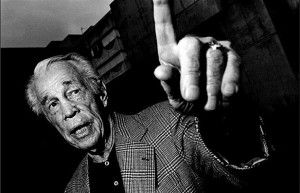 Film historian and critic David Thomson wrote of the Boetticher-Scott westerns in The New Biographical Dictionary of Film, calling them “…a remarkable series of Westerns, all made cheaply and quickly in desert or barren locations.  They have a consistent and bleak preoccupation with life and death, sun and shade, and encompass treachery, cruelty, courage, and bluff with barely a trace of sentimentality or portentousness.”

Bruce Ricker directed an excellent documentary on Boetticher in 2005, called Budd Boetticher:  A Man Can Do That, taken from a Burt Kennedy-written line used more than once by Randolph Scott in the Ranown movies.  It’s 87 minutes long, and the executive producer was Clint Eastwood.  It’s part of the 2008 boxed set of the Ranown movies–minus Seven Men from Now and Westbound.

And for an extended biographical treatment of Boetticher by Axmaker, see http://sensesofcinema.com/2006/feature-articles/boetticher/ 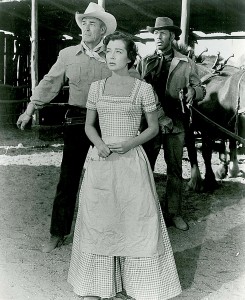