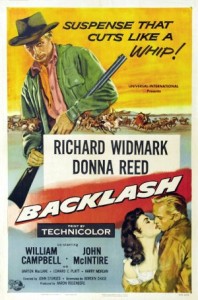 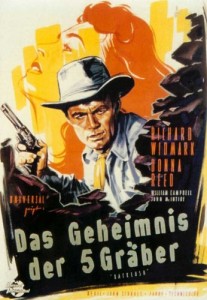 Director John Sturges was in the middle of a pretty good run of westerns.  He made this just after Bad Day at Black Rock and just before Gunfight at the OK Corral, The Law and Jake Wade (also starring Widmark, but that time as a psychotic bad guy) and Last Train to Gun Hill.  This is a step below those, but it’s still quite watchable.

This one opens with a rider in black, who turns out to be Karyl Orton (Donna Reed) in a curiously flat-crowned had, obviously made for women.  She encounters Jim Slater (Richard Widmark) digging at the site in Gila Valley, Arizona Territory, where Apaches had killed five men.  Slater, a Texan from Nacogdoches and veteran of the Civil War who never knew his father, thinks that his father was one of the five.  And he’s looking for a sixth man who escaped the Indians with $60,000 in gold.  Orton’s husband, also a Confederate veteran whom she hasn’t seen since the war, was in the group, too.  While they’re getting to know each other, somebody starts shooting at them from the rocks above.  Slater outflanks the shooter and kills him when he won’t put down his gun; Slater is obviously both good with a gun and doesn’t back down from a challenge or from authority.  The dead man has a badge that says he’s a deputy sheriff in nearby Silver City, and they take him back there.

The sheriff, somewhat hostile, says that the dead deputy was named Welker.  His brother was one of those killed at Gila Valley, and he has two more brothers who are both good with guns and of bad character.  Slater isn’t sure he can trust Orton much, and they seem to go their own ways.  They move on to Tucson separately, where they’re both looking for a Sgt. George Lake, who was in charge of the detail that buried the victims in Gila Valley.  It turns out he’s at Benton’s trading post, and when they get there, it’s under siege by Apaches. 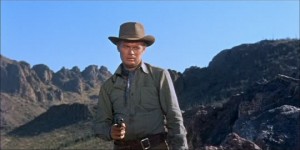 Lake (Barton MacLane) obviously has other things on his mind and isn’t interested in rehashing Gila Valley.  The Apaches run off the whites’ horses, and Lake and Slater figure the only way out is to return the favor and escape with the horses still hitched to the stagecoach.  They carry out that mission and develop more of a rapport, getting away with a couple of Indian horses.  Lake, however, is badly wounded.  Before he dies, he tells Slater that three of the bodies were identifiable (one was a Welker) and of the two that were not, one was missing a left hand from an old injury.  The sixth man, the one who got away, was riding a horse with Major Carson’s Texas brand.  Lake knew, but didn’t think much of, Orton’s husband Paul.

Back in Tucson, the nasty Welker brothers Jeff (Robert Wilke) and Tony (Harry Morgan) commandeer Orton in a hotel, looking for Slater.  As Jeff takes her upstairs in a saloon, Slater walks in and Orton identifies him to them.  He gets both Jeff and Tony, but is wounded himself in the left shoulder and leaves town.  Orton follows him and doctors his wound.  She’s pretty casual about taking off her shirt to use as a not-terribly-effective bandage, and she admits that her Confederate husband never came back because he heard that she was “fraternizing” with the enemy Yankees in Atlanta.  She and Slater come to a rough understanding. 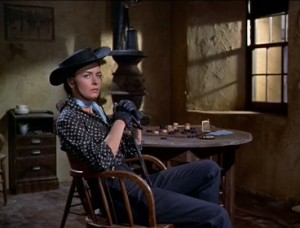 As they approach Carson’s ranch the next day, they are stopped by two of his men, one of whom, Johnny Cool (William Campbell), clearly fancies himself as a gunslinger, in the stereotypical black leather and all.  Carson and other big ranchers are about to move against Jim Bonniwell (John McIntire), a rancher-rustler who has recently taken to hiring gunmen and being more overt in his stealing of cattle.  While at Carson’s ranch, they learn that Carson’s nephew was the corpse with the missing hand.

As Carson’s small army prepares to ride into town early the next morning Slater and Orton head for town, to find that Johnny Cool is apparently working for Bonniwell and still wants to kill Slater.  Bonniwell stops him, and rides out; Slater is put in jail by the local sheriff, who thinks Slater’s working for Bonniwell.  Tony Welker shows up, still looking for Slater, and antagonizes Johnny Cool, who has decided he wants Orton.  Cool wins the shootout with Welker, reducing by one the number of people who want to kill Slater.

Even earlier than Carson, Bonniwell brings his own smaller army into town the next morning to set up an ambush for Carson.  He kills the sheriff, whom he correctly assumes to be on Carson’s side, and he lets Slater out, discovering in the process that he is Slater’s father.  Johnny Cool won’t be dissuaded from trying to kill Slater, and Bonniwell lends Slater his gun.  Slater wins; he’s not as showy as Cool, but he’s faster.  It’s part of his genetic legacy from Bonniwell, apoparently. 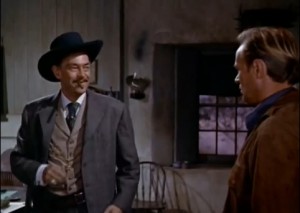 As the ambush develops, Slater warns Carson by firing shots and Bonniwell tries to kill Slater.  As the final shootout between father and son develops (with Bonniwell cheating), Bonniwell is shot in the back by one of the Carson band.  And Slater and Orton ride off together with their dark pasts.

The best line:  When Bonniwell is setting up his ambush in town, he comments in avuncular style:  “You know, I’ve never seen it fail.  When you take a trigger-happy bunch sitting it out like this, somebody’s bound to start fooling with his gun.” 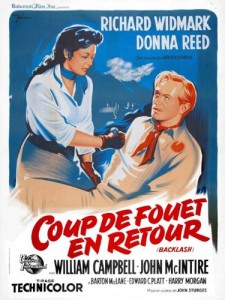 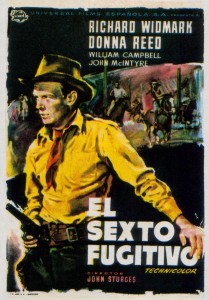 Widmark and McIntire are good, with McIntire playing much like his role in The Far Country.  Reed isn’t a natural at westerns (this is the last of her eight westerns), but she’s fine here.  Neither Widmark (supposedly from Texas) nor Reed (supposedly from Atlanta) has an accent that relates to their origins, but that’s just as well.  When Widmark tried a southern accent in Alvarez Kelly, it wasn’t terribly persuasive.  There are geographical oddities:  the trip from Arizona Territory to Texas seems to take no time at all.  Lots of ins and outs for just 84 minutes.  From a book by Frank Gruber, the screenwriter was Borden Chase.  In color, shot partially in Old Tucson.