Better than most of the lower-profile and made-for-television western productions in the last twenty years or so.  The title doesn’t tell you much about this western.  It’s set in the ranch lands of western Canada of the 1920s. It’s still frontier, to a significant degree, and the financial times are hard.

Wilbur Bennett (Richard Donat) owns the Four Arrows ranch and is suffering health and financial problems.  With his dying request, he sends his foreman Royal Leckner (Henry Czerny) to Chicago to collect his long-neglected and presumably mentally-impaired 15-year-old son Leviatus (Shawn Ashmore) from a sanitarium, where he has been since birth.  There Leckner finds the young man surviving under deplorable conditions, with Sophie Twelvetrees (Gloria May Eshkibok), an Objibway woman who is also a patient, as his only protector.  The three of them ride in a cattle car back to Canada.

Meanwhile Jane Makepeace (Colette Stevenson), a prim young Englishwoman who has been serving as a secretary to unscrupulous banker Sir Robert Butler (David Fox), declines his advances and has to find another situation for herself.  Desperate, she takes her accounting and business skills to the Four Arrow ranch, where she hopes to make herself necessary and maybe even get paid by helping them put their business affairs in order.  She also becomes the intermediary for Sophie and Levi to Leckner and the rest of the world. 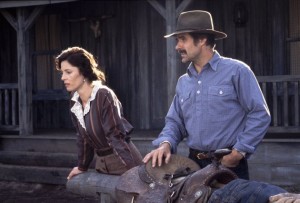 The remainder of the movie centers around whether Jane will be allowed to stay, whether Levi will ever become functional and whether Leckner will succeed in keeping the ranch afloat financially and out of the clutches of the nasty banker.  Also on the fringes is Wilbur’s brother James Bennett (Aidan Devine) who feels aggrieved by the very existence of young Levi and is nefariously helping nasty banker Butler behind the scenes.

It turns out Levi is deaf, not mentally deficient.  Leckner, Levi, Makepeace and associated ranchers make a cattle drive to Pendleton to produce the money they need to keep the bank and Butler at bay.  The ending is much as you’d expect, but with an interesting shootout in a hospital.

The story has something of a Hallmark feel about it, since it’s about the formation of a family by a group of unrelated strangers and has an interesting and, to some extent, unexpected (by everyone except the viewers, who are thinking “Why else would we be watching this?”) romance at its core.  But it plays out well, and the central performances by Czerny and Stevenson make the film better than anticipated.  And the pacing, editing and storytelling are good here, too.  Based on the book The Four Arrows Fe-As-Ko by Randall Beth Platt.  Filmed in Canada. 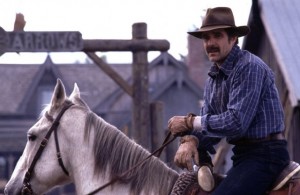 This is an unheralded and underrated Canadian production, somewhat like The Grey Fox and Gunless in that respect.  They’re also worth more attention.