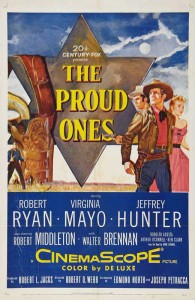 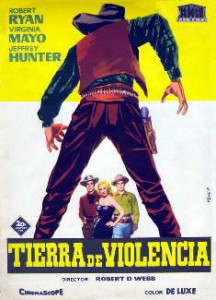 The title apparently refers to aging town marshal Cass Silver (Robert Ryan) and young Thad Anderson (Jeffrey Hunter) in Flat Rock, Kansas, a cow town.  Early in the movie, Cass has a run-in with a dealer in a saloon run by Honest John Barrett (Robert Middleton, good here in his slimy mode), with whom he has a long and none-too-cordial history.  Silver, Barrett and Sally (Virginia Mayo) all knew each other in Keystone, where Silver was previously marshal.  A bullet creases Cass’s head and leaves him with impaired vision, and maybe dizziness, when he looks down.  Thad Anderson, just in with a trail herd from Texas, saves Silver from another gunman in the incident but takes a bullet in the leg.

Cass spends the rest of the movie trying to evade assassins sent by Barrett, while he’s having recurring vision problems (and they’re getting worse).  Cass killed Thad’s father in Keystone, and Thad seems to be looking for revenge.  But he spends most of the movie getting wiser, both about what happened with his father and about Cass.  Cass hires him as a deputy and educates him in various ways:  “Your first lesson comes now.  At night, always walk in the shadows—you can see better.  In the daytime, walk away from the sun–you’ll live longer.”

Barrett’s public relations campaign with the locals seems to be working; the townspeople are increasingly uncomfortable with Cass and his skill with a gun.  Barrett spreads stories about Cass shooting unarmed men, including Thad’s father.  Cass in turn doesn’t know who he can really depend on, if anyone, since his deputy has a long-term grudge against him that he’s never hidden.  When the chips are down, though, Thad joins with Cass.  In the final shootout with Barrett’s men, Cass and Thad prevail and bond further.  Cass goes off to Kansas City for medical attention and to marry Sally.

A good B-movie cast.  Virginia Mayo is a local businesswoman and Silver’s long-time romantic interest, but she has little to do here except express concern.  Walter Brennan is the jailor-deputy Jake, Arthur O’Connell is a nervous Silver deputy, and Rodolfo Acosta is Chico, a Barrett gunslinger trying to kill Cass.  In color, with cinematography by Lucien Ballard.  Lots of whistling on the effective soundtrack music by Lionel Newman.

This is said to be a remake of the non-western Red Skies of Montana from four years earlier, also with Jeffrey Hunter.  It can also be seen as another 1950s western exploring the uneasy relationship between the townsfolk and the good-with-a-gun marshal they hire to defend them.  More explicitly, it can be seen as a variation on the Rio Bravo aspect of that theme, as emphasized by the presence of Walter Brennan as the jailer.  Better than average, but kind of talky.  If you like Robert Ryan here, watch him in Day of the Outlaw from about the same time and as a supporting character to Burt Lancaster in Lawman from the early 1970s.  This is one of Jeffrey Hunter’s better roles, although he was always limited as an actor.