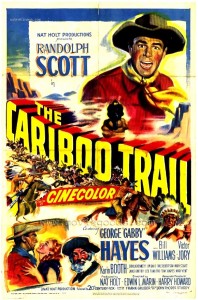 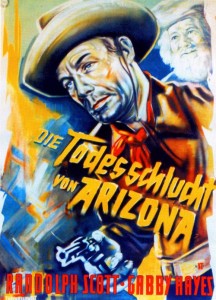 The plot for this resembles Anthony Mann’s better known The Far Country, which would follow in a couple of years.  A cattleman takes a herd north to mining country in western Canada, only to encounter trouble from a corrupt town boss and his minions, while developing romantic interests with both a woman who runs a saloon and a more plebeian but more obviously honest young woman.  In this case, the cattleman is Jim Redfern (Randolph Scott, at the height of his box office appeal), bringing a small herd to the wild gold strike country of British Columbia with Mike Evans (Bill Williams), and a Chinese chuck wagon cook (Lee Tung Foo).

Refusing to pay an exorbitant toll on a bridge, they stampede their herd across and meet prospector Grizzly Winters (Gabby Hayes).  The town is run by Frank Walsh (Victor Jory), a bookkeeper-looking boss with more obvious gunmen around him.  Walsh’s men rustle the cattle, and Evans loses an arm in the stampede.  Redfern and Evans find some sympathy with Frances Harrison (Karin Booth), who owns the Gold Palace and has refused to sell out to Walsh. 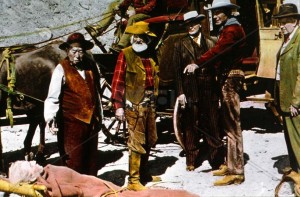 Getting the wounded Evans (Bill Williams) to a doctor.

Although he’s a novice prospector, Redfern finds a gold strike, which he uses to buy into a large herd being brought in from the south.  (The foreman of this new herd is Will Gray, played by Dale Robertson.)  Meanwhile, the embittered Evans both joins and fights Walsh, while he blames Redfern for the loss of his arm.  In the resolution, Walsh’s men try to stampede the new herd, and Evans leads miners to the rescue but is killed.

In color, but a curiously flat color.  The plot’s not as coherent as it might be, and the end is abrupt.  Serviceable, but not as good as The Far Country or Scott’s later work with Budd Boetticher.  This is Hayes’ final film, and he’s not as obnoxious as in some of his earlier Roy Rogers vehicles. 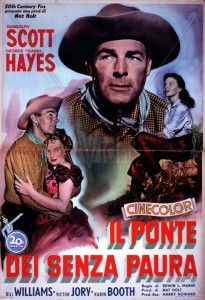 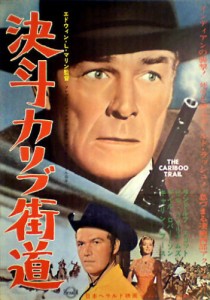