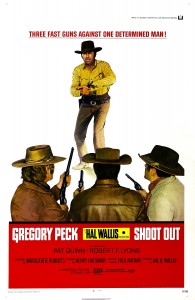 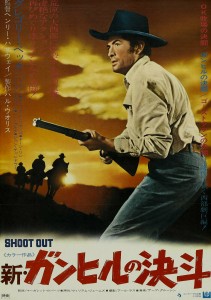 A revenge story, like Peck’s The Bravados more than ten years previously.  One of Henry Hathaway’s last movies, and a late western for Gregory Peck, who plays Clay Lomax, released from Colorado’s Canon City prison after seven years for bank robbery.

During the robbery, Lomax’s partner Sam Foley (James Gregory), shot him in the back, left him for dead and made off with the loot.  He has since prospered in Gun Hill with his ill-gotten gains, but he’s worried about Lomax.  He sends three senseless young gunmen led by Bobby Jay Jones (Robert F. Lyons) to follow Lomax and let Foley know where he’s headed.  Initially, Lomax takes the train to Weed, where he was shot, to ask crippled local saloon keeper and whoremaster Trooper (Jeff Corey) where Foley is to be found.  Unable to restrain themselves from violence, the three gunmen following kill Trooper and take Alma (Susan Tyrell), one of his prostitutes, with them. 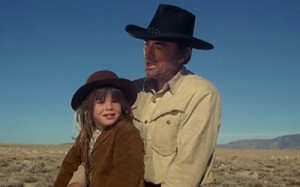 Lomax meets the train from Kansas City, expecting $200 from a “lady” there.  Instead, she’s dead and Lomax is handed her daughter Decky (Dawn Lyn), six or seven years old.  He tries to palm her off on anybody else, but there are no takers.  Finally they head off for Gun Hill, and Lomax discovers they’re being followed by the three ne’er-do-wells.  He takes their guns and rides on.

In the rain, he and Decky come to the ranch of widow Juliana Farrell (Pat Quinn) and her son.  They seem to hit it off very quickly, for no very good reason except that he’s basically decent and so is she.  The three bad guys burst in on them and terrorize them until finally Lomax gets the upper hand.  Bobby Jay’s two stupid confederates are dead after this confrontation, and he heads directly for Foley with Lomax in pursuit.  When Foley pays him off, he shoots Foley and takes the rest of his money just as Lomax gets there.  Lomax wins the extended shootout, as we knew he would, and heads back for the widow and Decky. 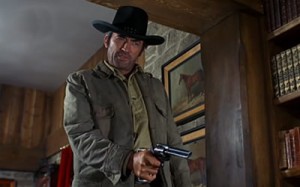 This has good character actors, such as Corey, Fix, Tyrell and Hunnicutt.  The child (Dawn Lyn) isn’t bad, though occasionally foul-mouthed.  Use of the child should make it a family film, but there’s violence, brief nudity and some foul language, so it doesn’t come together well.  The bad guys are stupid, loud and annoying, as well as bad.  This has a pretty meaningless title that could apply to almost any western.  Lomax’s use of the word “punk” seems anachronistic.  There are a couple of shots of Lomax and Bobby Jay supposedly riding, where it’s obvious they’re not really on horses.  Altogether, this is a mildly disappointing effort from the same director (Hathaway)-producer (Hal Wallis)-writer (Marguerite Roberts) team that had made True Grit a couple of years earlier.  It’s not as bad as Peck’s other late westerns McKenna’s Gold or Billy Two Hats, though.  For a better Gregory Peck revenge story, see The Bravados.  Excellent score by Dave Grusin.  Based on a story by Will James.  Filmed in Cerillos, New Mexico.  In color.