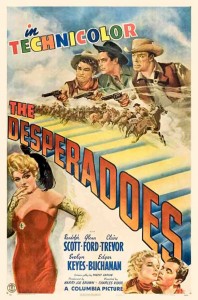 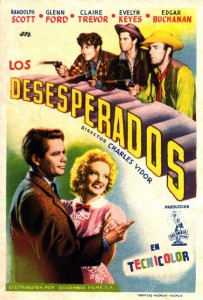 In 1943, Randolph Scott was moving to the phase of his career where he would concentrate on making westerns, when he was paired with the young Canadian actor Glenn Ford in this western set in Utah in 1863.  Shot in color (Columbia’s first color feature, in fact), this was a big-budget western for its time.

In the town of Red Valley, Utah Territory, the sheriff is Steve Upton (Randolph Scott), who might be interested in Allison McLeod (Evelyn Keyes), proprietor of the local livery stable.  The local banker and several others are conspiring to have the bank robbed every time the army pays for horses, only to make off with the money themselves.  Uncle Willie (Edgar Buchanan), Allison’s father, is in on it and has sent for an outlaw to do the robbing.  Wanted outlaw-gunman Cheyenne Rogers (Glenn Ford) and his pal Nitro Rankin (Guin Williams) show up, but he’s late and the bank has already been robbed by somebody else. 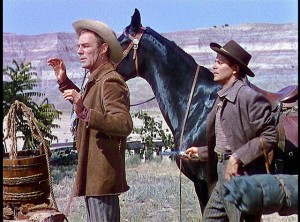 Cheyenne (Glenn Ford) steals the sheriff’s horse, without the sheriff (Randolph Scott) seeing who he is.

Cheyenne’s horse goes lame as he enters the valley, and he comes upon the sheriff watering his horse while out looking for the robbers.  Without allowing the sheriff to turn around, Cheyenne takes his horse, leaves the lame one and heads for town.  When the Steve does finally see him, it turns out they are old friends from Wyoming, along with the Countess (Claire Trevor), who runs the town’s principal gambling establishment.  Taking the imaginative name Bill Smith, Cheyenne develops an interest in Allison himself and decides to go straight.

That’s not so easy in the corrupt environment of Red Valley.  Steve orders Cheyenne and Nitro out of town when local elements want to push them into a fight, and, unknown to Cheyenne, Nitro robs the bank for real on the way out.  The judge insists that Steve arrest Cheyenne and Nitro for the robbery and intends to hang them.  Steve thinks hanging is too severe a penalty for a robbery in which the money was returned and nobody was hurt.  Cheyenne had nothing to do with it, anyway.  So Steve lets them escape, only to be put in the jail himself for his efforts.  The bad guys wait for Cheyenne to return and rescue Steve; they’ll get him then and blame the previous bank robbery on him, too. 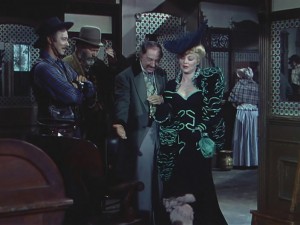 The Countess (Claire Trevor) chats up the bad guys.

Stampeding a herd of horses as it nears town gives Cheyenne a cover to slip in and bust Steve out of jail.  There is a showdown with the most belligerent of the bad guys, Allison marries Cheyenne, who presumably will be able to carry out his intention of going straight, Uncle Willie goes to jail peaceably, and Steve is able to get rid of the corrupt banker, judge (Raymond Walburn) and other elements in town. 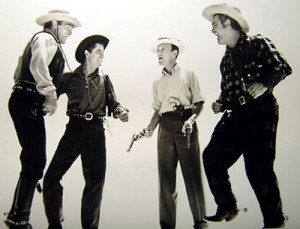 Randolph Scott, Glenn Ford and Big Boy Williams fooling around with set visitor Fred Astaire during the making of The Desperadoes.

There’s a lot of action and good fights, with some comic undercurrents provided by Williams (who wears the most mismatched plaids in cinematic history) and a long-suffering bar owner (Irving Bacon) whose establishment keeps getting smashed up.  The horse stampede is very well done–Randolph Scott used one again the same way in The Doolins of Oklahoma a few years later.  Nitro’s use of nitroglycerin is anachronistic for 1863; it wasn’t available for two or three more decades.  Although Randolph Scott was the bigger name in movies at the time, the concentration here is more on Ford’s character than on Scott’s.  They don’t really look the same age.  Director Charles Vidor, the less prominent brother of director King Vidor, was married to Evelyn Keyes, who gives a good performance as Allison.  John Ford’s brother Francis Ford is one of the townsmen.  Uncle Willie is one of Edgar Buchanan’s juicier roles, too.  Young Budd Boetticher was an uncredited assistant to director Vidor; his own directing was still almost ten years in the future.  The film moves right along, at only 87 minutes. 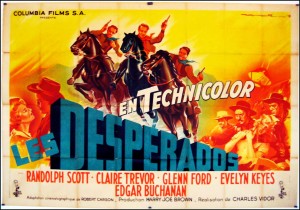 Vidor directed Glenn Ford again three years later after Ford’s return from the war in the classic film noir Gilda.  By then Ford was starting to look more his age.

Not to be confused with 1969’s The Desperados (without the second “e”), with Jack Palance, Vince Edwards and George Maharis.  Or with Ron Hansen’s excellent 1979 novel Desperadoes, about the Dalton gang.  Or with Desperado, the song made famous by Linda Ronstadt in 1973.  Take your desperadoes where you can find them.