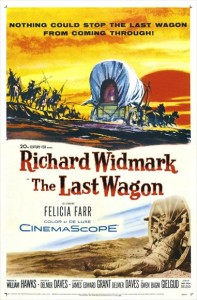 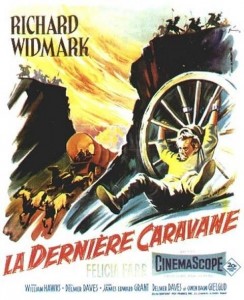 Sheriff Bull Harper:  “Don’t be fooled by the color of his eyes and his skin.  He may be white, but inside he’s all Comanche.”

As the movie opens, Comanche Todd (Richard Widmark) is on the run on foot from what appears to be a posse.  He gets two of them before the leader, the brutal Sheriff Bull Harper (George Matthews), captures him.  While Harper’s taking him back for trial, they encounter a wagon train of devout Christian emigrants in Apache territory and band together with them, at least for protection from the Indians.  We’ve seen Todd kill others in the posse already, but Bull Harper doesn’t seem all that trustworthy either.

[After capturing Todd, Sheriff Harper offers to join Colonel Normand’s wagon train.]  Col. William Normand (Douglas Kennedy):  “He’s safe in your custody, I suppose. It’s just that we got women and children with us.”

The next night several young people are off swimming and, when they return to the wagons, they find them burned and everyone killed by the Apaches.  Todd, who was manacled to a wagon wheel, went over a cliff with the wagon, but he’s still alive.  And he’s the only hope of the young people to get out of the desert and wilderness alive.  Only he has the survival skills and the wilderness knowledge they’ll need.  Jenny (Felicia Farr) and her young brother Billy (Tommy Rettig) are inclined to trust Todd, but two others (including Nick Adams) don’t and the remaining one (half-Indian, played by Susan Kohler) is undecided.

Comanche Todd:  “We’ve got six bullets, and that idiot uses up three of them on a stinkin’ rattler you could kill with a stick.”

The relationships develop while Todd guides them toward safety, with death lurking constantly around every corner.  Eventually Todd saves a patrol of soldiers, who then take him into custody.  The final scene is Todd’s trial before General Oliver O. Howard, where it comes out that the sheriff and his three rotten brothers had raped and killed Todd’s Comanche wife and son and had left him for dead.  He’d been hunting them ever since.

Delmer Daves, like John Sturges, is one of those directors from the 1950s whose westerns are usually worth watching.  So is this.  Although it’s quite watchable, however, it’s not smoothly plotted.  The ending doesn’t have the same edge that the rest of the film does.  Widmark is excellent as Todd, keeping us unsure how bad or good Comanche Todd is, and Felicia Farr is also very good.  At this stage of his career, Widmark was playing both bad guys (The Law and Jake Wade) and good guys (Sturges’ Backlash and this) in westerns, although he had made his initial reputation ten years earlier playing psychotic killers in films noir.  To see Farr in another western, she plays the girl who catches Glenn Ford’s interest in a barroom and delays him long enough that he gets captured in the original 3:10 to Yuma (1957), also directed by Delmer Daves.  She’s also in Daves’ Jubal.  This film is better looking than much of Daves’ work.  Shot in color (Cinemascope and Technicolor) in Sedona, Arizona.  98 minutes.  Music is by Lionel Newman, younger brother of Alfred Newman.