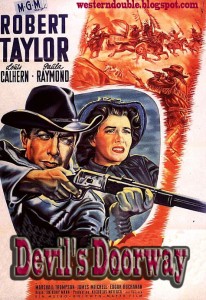 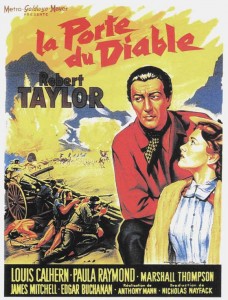 An early and socially-conscious western by Anthony Mann (it was his first western, in fact); and a range war western with an interesting Indians vs. whites twist.  Civilized Shoshone Indian Lance Poole (or Broken Lance, played by blue-eyed Robert Taylor in dark makeup with his hair growing longer as the movie progresses) fought at Antietam in the Civil War and won the Medal of Honor at Gettysburg, but he returns home to find that his people are in trouble.  His home town is Medicine Bow (the same Wyoming town that was the setting for The Virginian), and his family has long ranched at Sweet Meadows in the mountains.  The gap leading to their mountain valley is known as the Devil’s Doorway, and much of the action takes place around it.

Long-time residents like Zeke Carmody (Edgar Buchanan) know Lance and treat him well enough.  However, a venal and bigoted eastern lawyer, Verne Coolan (Louis Calhern), has lured sheep ranchers to the area with the promise of free land for the homesteading—Sweet Meadows.  Lance tries to follow the law, as directed by his young and attractive female attorney Orrie Masters (Paula Raymond, with Spring Byington playing her mother).  But Indians are not U.S. citizens (not until 1924, in fact), and can’t legally homestead themselves. 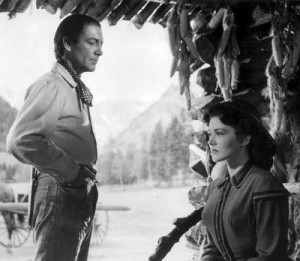 Lance (Robert Taylor) and Orrie (Paula Raymond) ponder the futility of it all.

Lance’s father dies, and a band from the reservation seeks refuge with Lance at Sweet Meadows.  Lance tries legal recourse, but Coolan forms a mob and attacks Sweet Meadows.  The Indians are successful in holding them off for a while (both sides use dynamite, which is probably anachronistic for the 1860s), and Lance kills Coolan.  But Masters calls in the cavalry from Fort Laramie to get the Indians back to the reservation.  By the time the Indians agree to go back to the reservation, there are only the women and children left alive.  Lance dies theatrically, wearing his soldier’s jacket and Medal of Honor.

The film is not based on any historical incident involving Shoshones, but it’s not wrong about the implacability of racial attitudes at the time, either.  The reservation in question would have been the Wind River reservation, which wasn’t, and still isn’t, bad as reservations go.  In those days the Shoshones would have only felt the need to leave it to go buffalo hunting.  The great Washakie was the Eastern Shoshone chief in the 1860s, and he was an effective leader respected by both Indians and whites. 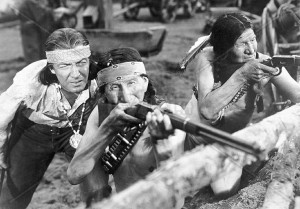 Beleagured Shoshones defend themselves against settlers, in a reversal of the usual situation..

Orrie and her mother, as sympathetic, even radical, as they are for their times, can’t bring Orrie to act on the attraction she feels for Lance.  One of Lance’s last comments to Orrie:  “Maybe in a hundred years we could have made it work.”  But he’s right; in the 1860s, the Indians couldn’t win in this fictional situation.  Even Custer’s demise was ten years in the future.  This plays well with modern social sensibilities 60 years after its release.  It’s a little heavy-handed, especially at the end, but watchable.  Taylor, Calhern and Raymond are all good.  It was released the same year as the more celebrated Broken Arrow.  Shot in black and white by cinematographer John Alton, with great mountain scenery in Grand Junction and Aspen, Colorado.  The aspens and mountain meadows look authentic.