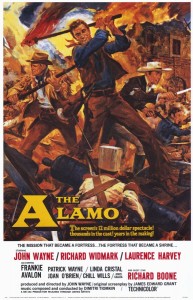 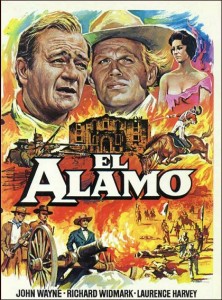 This retelling of the Alamo story and the beginnings of Texas independence from Mexico is perhaps the most John Wayne film ever made:  Wayne was the star, producer, and director, and his company provided some of the financing.  Wayne as an actor was at his peak in the wake of The Searchers and Rio Bravo, and the movie was released to great hype.  From our vantage point more than 50 years later, one would expect that it would have done well at the box office but perhaps not been greeted with much enthusiasm by critics.  In fact, it was the opposite.  A hugely expensive production in its time ($12 million) with an enormous cast, it only made back $8 million domestically.   Wayne lost his personal investment.  The movie eventually went into the black, making lots of money in Europe and Japan, but Wayne no longer owned it by that time.  Critical reaction was mixed at best, but the movie was one of the few nominated for for the Best Picture Academy Award for 1960.

In 1836, Texans are declaring their independence from Mexico, and Mexican president/generalissimo Santa Anna is bringing his experienced army of more than 6000 north to bring them back into the fold.  There is not much of a Texas army to oppose him—only 600 men under Fannin at Goliad and 187 men commanded by William Barret Travis (English actor Laurence Harvey) at San Antonio, using the old mission at the Alamo as a fortress of sorts.  Sam Houston (Richard Boone in his curmudgeonly mode) is trying to put together a real army to oppose Santa Anna, but he desperately needs time to do that. 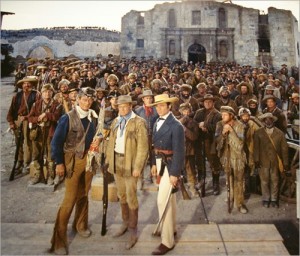 In addition to Travis, “Colonel” Jim Bowie (Richard Widmark), former Louisiana land speculator and knife fighter, commands some militia at the Alamo.  And a bunch of roistering Tennesseans nominally led by former congressman Davy Crockett (John Wayne) are in town with an uncertain destination.  Travis offends local Hispanics such as Juan Seguin (Joseph Calleia), who would otherwise support Texas independence, Travis and Bowie bicker constantly, and Travis ineffectively tries to recruit the Tennesseans.

During the build-up, Crockett bonds with his men, gives the occasional speech about how the word “republic” chokes him up, and makes a play for a young and attractive Hispanic widow (the beautiful Linda Cristal).  She has no apparent dramatic purpose, since she doesn’t actually get together with Crockett and she doesn’t stick around after the first third of the movie.  In the midst of their drunkenness, Crockett manipulates the Tennesseans into joining the defenders of the Alamo. 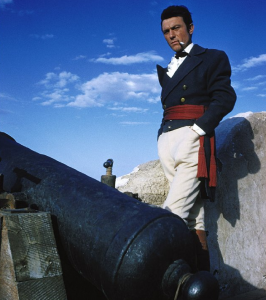 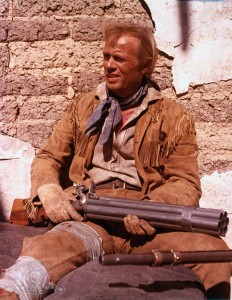 Laurence Harvey as Travis and Richard Widmark as Bowie (with his volley gun).

Santa Anna and his good-looking army show up and blast away at the Alamo.  Crockett and Bowie conduct a commando operation to destroy the biggest Mexican gun, and there are constant conflicts with Travis.  It can be no secret to us (or to audiences of 1960) that in the end the defenders are overwhelmed by Santa Anna’s forces and slaughtered to a man in an extended battle sequence, creating the first heroes of Texas independence.  Each of the three defending principals gets an appropriately heroic end.

The need to make this a John Wayne movie means this film disproportionately focuses on the supposed Crockett, who seems not very authentic historically.  He’s not too old for the part, since Crockett was almost 50 when he died at the battle.  There’s a lot of meandering in the first two-thirds of the movie with extraneous characters.  The Tennesseans (especially Chill Wills) quickly become tedious in their constant drunken revelry.  Apparently having learned from Rio Bravo that one should always have a teen-idol singer in the cast to appeal to the younger demographic, Frankie Avalon here is another in a series of unnecessary young brothers and compatriots (Fabian in North to Alaska, Bobbie Vinton in Big Jake and The Train Robbers) who can’t act well. 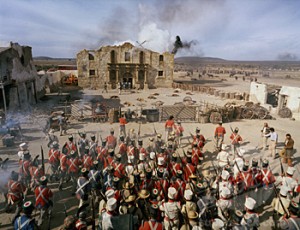 In production design, there are a few concessions to 1836 this time, especially in the hats and firearms.  Bowie’s seven-barrel flintlock volley gun (called a Nock gun, after its British maker) looks impressive; such a gun was developed by the Royal Navy during the Napoleonic wars for naval warfare but was not widely used because of its horrific recoil.  Crockett’s coonskin cap looks hot and foolish; thankfully, he often wears more regular hats.

In Rio Bravo the year before, one of the prominent musical features was the constant playing of the Deguello, Mexican-flavored trumpet and guitar music that was said to have been played by Santa Anna’s men at the Alamo, signifying that no quarter was to be given.  It was a romantic story, but, In fact, the tune was composed by Dimitri Tiomkin for that film.  Here the theme music is a combination of the Tiomkin Deguello and the melancholy “Green Leaves of Summer” by Tiomkin, which would be nominated for an Oscar and become a big hit for the folk group The Brothers Four.  The overture and musical intermission are usually omitted for television broadcasts. 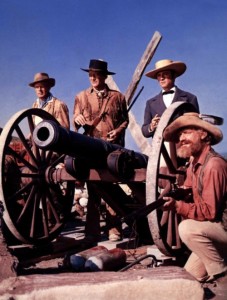 Cinematography was by the excellent William Clothier.  The screenplay was by James Edward Grant (Angel and the Badman), long a favorite (and often clunky) writer-friend of Wayne’s.  The two or three patriotic speeches dropped in, especially those for Wayne, stop the action and don’t work very well.  Producer/director Wayne wanted to express his patriotic sentiments and he got his way, but that aspect doesn’t play well now.  The final battle scene has some curious editing, showing Mexican soldiers lunging at one or another of the notable defenders, cutting away, and seconds later returning to the defender, now skewered with a bayonet or sword and falling over.

The Alamo received seven Academy Award nominations.  It won the Oscar for Best Sound (Gordon E. Sawyer, Fred Hynes) and was nominated for Best Supporting Actor (Chill Wills), Best Cinematography (William Clothier), Best Film Editing (Stuart Gilmore), Best Musical Score (Dimitri Tiomkin), Best Music (Song) (Dimitri Tiomkin and Paul Francis Webster for The Green Leaves of Summer) and Best Picture.  Chill Wills placed a tasteless ad in Variety, soliciting votes and referring to those who voted for him as his “Alamo cousins.”  Groucho Marx responded in a small ad of his own:  “Dear Mr. Wills, I am delighted to be your cousin, but I voted for Sal Mineo” (nominated for Exodus). 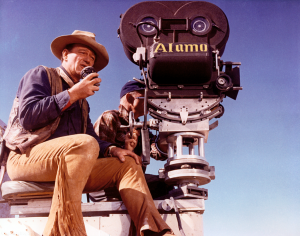 Wayne directing, apparently in the same hat he wore from Stagecoach (1939) through Rio Bravo (1959).  The hat does not appear on-screen in The Alamo, though.

This film is a relic of John Wayne in the 1960s at the height of his career, and that is the reason to watch it.  John Wayne learned that he didn’t want to direct, although he took over that role again (uncredited, at his insistence) on 1962’s The Comancheros when Michael Curtiz was dying of cancer.  As in the making of other films (see The Cowboys, for example), Wayne’s right-wing politics sometimes conflicted with those of others in the production.  In this case, Widmark didn’t get along with him well.  Widmark repeatedly challenged Wayne’s direction and once they almost came to blows; thereafter the two remained professional but distant. The movie is long, at 167 minutes, and there is a director’s cut at 203 minutes (1993, obviously done without Wayne’s participation) if you want even more and if you can find it.  The movie was re-released in 1967 at 140 minutes, so there are lots of choices.  Some of these cuts are in need of restoration.

So how accurate is it?  Not very.  For example, Bowie did not brandish a seven-barrel volley gun, nor was he wounded in the leg during the final assault, nor did his wife die during the time of the siege. He fell ill due to typhoid fever and was barely awake during the final attack, and Bowie’s wife had died a year before the battle was fought.  Fannin was not ambushed and slaughtered during the siege of the Alamo.  He and his men were murdered in Goliad on Palm Sunday three weeks after the Alamo fell.  Bowie and Crockett never made the decision to leave the Alamo as shown in the movie.  Though Bowie and Travis disliked each other intensely, they agreed that the Alamo should be defended.  And the time frame for the battle is wrong.  The movie shows the final battle taking place during the day; in reality, the final Mexican attack was pre-dawn, while most of the Alamo defenders were sleeping.  The individual deaths of Travis, Bowie and Crockett are fictional, for dramatic effect.  They were killed, but, especially for Crockett, the individual circumstances are not generally known and are still a matter of debate.

In a bit part as an aide to Santa Anna, look for famed Mexican bullfighter Carlos Arruza; well-known director Budd Boetticher would fizzle away his career in Mexico during the 1960s trying to make his magnum opus, a documentary on Arruza, before Arruza’s early death in 1966.  If Arruza’s presence in the film was intended to make it appeal to Mexicans, it didn’t work; the film was banned in Mexico.  There are various Canutts (related to Yakima, legendary stuntman and second unit director), Patrick Wayne, even an uncredited Pilar and Toni Wayne.

The first movie about the battle at the Alamo was the silent The Immortal Alamo (1911), now thought to be lost.  There have been at least eight films portraying it, and three television productions, including Disney’s “Davy Crockett at the Alamo” episode on Disneyland.  This is not the best film ever made about the Alamo, but it might be the most prominent.  For a better, more historical Crockett performance, see Billy Bob Thornton in The Alamo (2004).  The 2004 movie, which tries for greater historical accuracy, is not among the greatest westerns, but it’s better than this version and Thornton’s performance is terrific.  The definitive Alamo movie has yet to be made.

For more actual history of the Alamo and its defense, focusing on the three protagonists (Crockett, Bowie and Travis) and doing a good job of separating the legends from what is actually known, see the books Three Roads to the Alamo (1999), by William C. Davis and The Blood of Heroes (2012), by James Donovan.