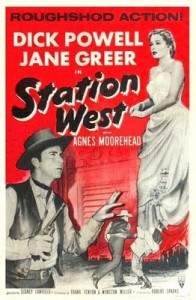 “A STRANGER IN TOWN…WHERE STRANGERS WEREN’T WELCOME!…and he found out a gal double-crossed is Deadly as Poison!”

Well cast, Dick Powell’s only western is sometimes referred to as a noir western, mostly because stars Powell and Greer frequently found themselves in films noirs but also because of the flavor of the dialogue and the shadows in the cinematography.  This is a rare western for both Powell and Greer, and they’re both very good in it.

Powell is Haven, an undercover military man investigating the murder of two soldiers killed while transporting gold.  He gets a job working for Charlie (Jane Greer), the very attractive owner of the local saloon and many other enterprises around town.  There’s a well-staged fight between Haven and Mick Marion (Guinn “Big Boy” Williams, playing Charlie’s chief thug instead of his usual quasi-comic relief).  The question seems mostly to be whether Charlie is centrally involved in local crime or whether it’s her right-hand man Prince (Gordon Oliver) who’s doing it. 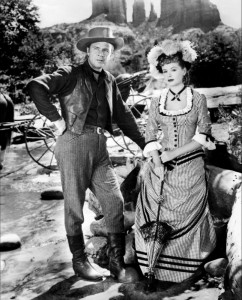 Chemistry develops between Charlie and Haven.  Agnes Moorehead plays a mine owner and romantic interest of the local post commander (Tom Powers).  Burl Ives is a singing hotel clerk and one-man Greek chorus as he comments on the action.  “A man can’t grow old where there’s women and gold.”  Both Ives and Greer sing, quite pleasantly.

In the end, Haven shoots Prince but Prince shoots Charlie while going for Haven.  Turns out that Haven and Charlie are in love, but that’s not going to work out.  There is snappy film-noir-style dialogue; this is based on a story by Luke Short, usually a good source for a western.  It seemed that not all the plot threads were resolved in the end, but it was pleasant to watch.  This might make a good double feature with Rancho Notorious, Blood on the Moon or Colorado Territory.  Above average; shot in Sedona, Arizona, in black and white with lots of shadows, at 80 minutes.  Good cinematography by Harry Wild.

Burl Ives was surprisingly interesting to watch in westerns.  He was in five or six of them, of which this is an early one and the only one in which he sings.  In his two best, from the late 1950s, he played strong leaders, very effectively:  The Big Country and Day of the Outlaw.