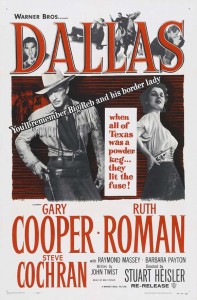 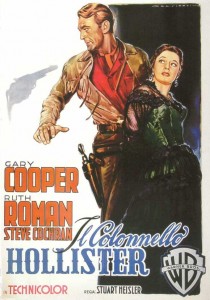 Clunky writing and unduly lurid names mar this otherwise ambitious effort.  In color and with Gary Cooper, this obviously had a good budget for a western in 1950.  It starts with a cameo appearance by Bill Hickok (Reed Hadley) as a marshal in Springfield, Missouri, who helps Blayde Hollister (Gary Cooper—see about the florid names?) stage his own death so that he won’t be followed by “wanted” posters in trying find the nefarious Marlow brothers.

U.S. Marshal Martin Weatherby:  “But Marshal! This – this outlaw; if you don’t arrest him, I shall!”

Wild Bill Hickok:  “Outlaw?  Let me tell you something, son.  This ain’t Boston.  We had a war down here and you’ll find men in high offices who are thieves and cutthroats.  You’ll find others who are branded outlaws that are only fighting for what’s their own.  There’s those known as bad men and those as are bad men.  You better learn to tell the difference!” 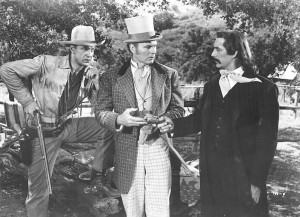 Hollister is an unreconstructed Civil War veteran hunting evildoers who burned his place and slaughtered his family in Georgia during the war.  He befriends Martin Weatherby (Leif Erickson), an apparently incompetent U.S. marshal from Boston.  Weatherby’s on his way to Dallas to aid the family of his fiancée, Tonia Robles (Ruth Roman), and Hollister persuades him to change places, since Weatherby is not only inappropriately dressed but incompetent with a gun.

Raymond Massey is the oldest and chief of the nefarious Marlow brothers, William, Cullen and Bryant.  Bryant (Steve Cochran) wears a Union kepi and two guns on two belts; he’s the most obvious and open gunman among the Marlow brothers.  William is apparently a respectable businessman, while actually being the mastermind of the Marlow operations.  Hollister kills Cullen soon after arriving in Dallas, and the question is how he’ll get the other two brothers.

Tonia Robles:  “Do you know what Texas means?  It’s an Indian word for friends.  It’s a big land with room for everyone.  And you could be a part of it in time.” 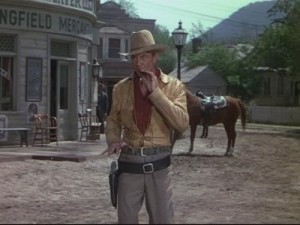 The Marlows temporarily capture Hollister, and he shoots it out with Bryant.  Bryant tells him it was William who lit the fires in Georgia.  As Hollister heads for town to get William, the oldest Marlow brother gets out on the other side of town while Hollister’s real identity is revealed by one of his former men.  He pursues William toward Fort Worth, where William has been successful in arranging for a posse to capture the infamous Reb Hollister.  William heads back to Dallas to extort as much as he can from the Robles family before he departs for good.

Hollister escapes from jail with the posse in hot pursuit, heading for Dallas, where Tonia’s father Don Felipe has been trying to raise money.  He enters the Robles house disguised as the father, taking out William’s accomplices and getting into an extended gunfight with William.  Meanwhile the posse follows and runs into the rest of Marlow’s men, who are captured.  Of course Hollister wins the fight with William, who is turned over to the authorities.  Weatherby has meanwhile arranged for a full pardon for Hollister, and Tonia has fallen for Hollister as well.  Weatherby goes off to build a railroad. 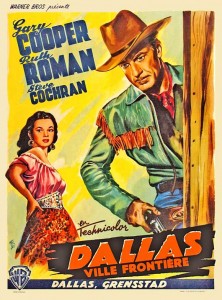 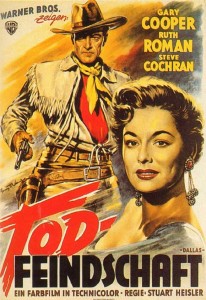 This is watchable but not terribly memorable.  This formulaic stuff is what Gary Cooper’s career in westerns had come to before High Noon; it had a big enough budget but isn’t remotely among his best stuff.  He’s watchable but not particularly believable.  Ruth Roman may be the best thing in this movie.  (See her in The Far Country; she’s good in that, too.)  It has some modestly comic touches, many of which are intentional.