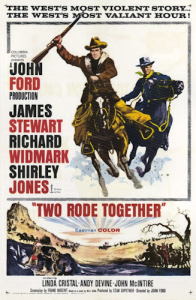 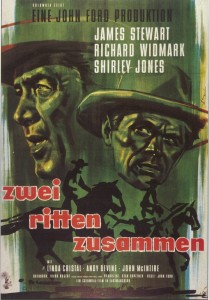 A clunky title, and not a well-put-together story set in 1870s Texas.  This is one of those, like Rio Grande, that John Ford appears to have made simply for contractual reasons or for the money, not because he had a compelling story to tell.  The two riding together are straight-arrow cavalry Lt. Jim Gary (Richard Widmark, seeming a bit old for the role at 45) and venal Tascosa marshal Guthrie McCabe (James Stewart, wearing the same battered hat from his 1950s westerns with Anthony Mann and also seemingly old for the role at 52).

McCabe has a sweet situation in Tascosa, where he gets ten percent of all the businesses in town, including Belle Aragon’s saloon and <ahem> in addition to his modest marshal’s salary.  The cavalry at Fort Grant is under pressure from civilians to recover their captive relatives from Quanah Parker’s Comanches; most have been with the Indians for years.  The cavalry, led by Major Frazer (John McIntire), can’t go onto Indian land without breaking the existing treaty and re-igniting active hostilities, so Frazer is recruiting McCabe for the job.  McCabe thinks an army scout’s pay ($80 a month) isn’t nearly enough for this kind of risky mission, so he gets contributions from the civilians and hears their stories.  One of the civilians is Marty Purcell (Shirley Jones), who’s looking for her brother.  Gary falls for her, although the relationship is inadequately developed.  (It seems to be taken for granted that anyone would fall for Shirley Jones, which may be true.) 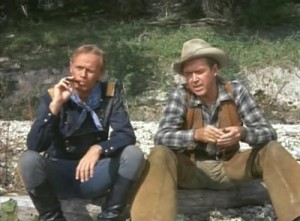 McCabe takes off for Parker’s camp, accompanied by a reluctant Gary in civilian clothes.  He trades guns and other weapons to Parker (played by six-foot-five-inch German-born Henry Brandon—Scar from The Searchers).  Parker has his own difficulties with militants like Stone Calf (Woody Strode), but he’s quite willing to trade his white captives, one of whom is Stone Calf’s wife, who turns out to be the Mexican Elena de la Madriaga (Linda Cristal).  Taking back Elena and Marty’s now much older brother, McCabe is attacked by Stone Calf and kills him.

Back at the post, the rescued captives have trouble integrating.  Marty’s brother is thoroughly an Indian, and he kills a slightly deranged white woman who claims to be his mother.  He is lynched for it.  The whites, especially the cavalry wives, do not accept Elena among them, either.  McCabe goes back to Tascosa to find he’s been replaced as marshal and in Belle Aragon’s affections.  He takes off for California with Elena to where their pasts presumably won’t follow them, and Gary and Marty get engaged. 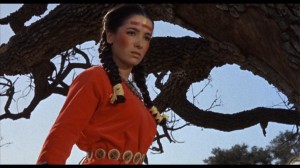 The beautiful Linda Cristal as Elena, a young Mexican woman recaptured from the Comanches.

The film has a large cast, including Harry Carey, Jr. (by this time it was becoming clear that he’d never be more than a bit player) and Ken Curtis (from The Searchers—at the time he was Ford’s son-in-law) as brothers and supposed comic relief.  Andy Devine is a fat sergeant, and Olive Carey is the major’s sympathetic wife.  John Qualen is a Scandinavian settler whose daughter won’t come back from the Comanches.  The Belle Aragon role (Annelle Hayes) sparks a little interest, but it’s not developed.  Linda Cristal (see her also in John Wayne’s version of The Alamo) is excellent, and Shirley Jones is underused.  And the leads are too old for the roles they play, although they’re both excellent actors (kind of like Gary Cooper in Man of the West).  This time around, there’s no Monument Valley.  The Comanches look pretty clean.

This film has some echoes of The Searchers—looking for whites among the Comanches, even the actor (Henry Brandon) playing the Comanche chief—but it’s not as coherent or focused.  It was also not a critical or box office success.  There’s no real resolution of the conflicting social attitudes, which is probably realistic.  The real Quanah Parker’s mother was Cynthia Ann Parker, a white captive.  This was the first of three westerns Stewart did with Ford, just before The Man Who Shot Liberty Valance.  Ford seems to be moving toward a more sympathetic view of Indians, which would come to full flower in his final movie three years later, Cheyenne Autumn, also with Widmark as a cavalry officer and Stewart badly miscast as a comic Wyatt Earp.  In color, with cinematography by Charles Lawton, Jr.  Written by Frank Nugent, a favorite of Ford’s.  Not Ford’s best work, but watchable. 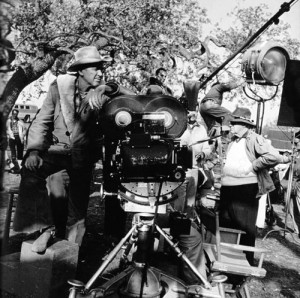 From Dave Kehr, NY Times columnist.  “Two Rode Together finds its most intimate moment in an unbroken four-minute shot in which a career officer (Richard Widmark) and a mercenary Indian trader (James Stewart) exchange their views on women and independence.  But this comic sequence proves to be the lead-in to a nightmarish evocation of domestic life gone wrong, as Widmark and Stewart enter an encampment of traumatized families, each hoping that Stewart will be able to negotiate the release of a member held captive by Comanches. The love of a husband for his wife or a mother for her child proves to be pitifully inadequate in the face of the cultural divide that has risen between them.

“Ford’s darkest and most bitter film, Two Rode Together opens into the mythic perspective of The Man Who Shot Liberty Valance (1962), where the shortcomings of human relations are subsumed by the greater march of civilization — a glorious lie masking an unbearable truth.”