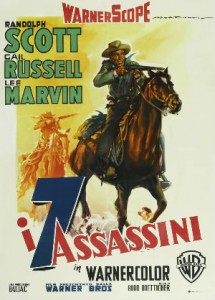 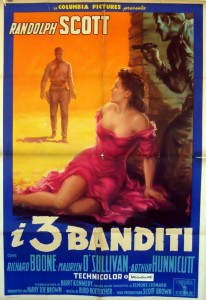 Italian posters for Seven Men from Now and The Tall T.

At one time in the 1960s, this list would have been headed by the four best of the Budd Boetticher-Randolph Scott westerns (Seven Men from Now, The Tall T, Ride Lonesome and Comanche Station) and Sam Peckinpah’s second movie, Ride the High Country.  But in the video-DVD age these have been much more widely available and in the last couple of decades particularly have been recognized as among the very best of their kind.  If there are any of these Boetticher gems you haven’t yet watched, quit reading this and go find them.

Why do they tend to be underrated?  There are a variety of reasons, but they fall into two categories:  The studios that produced them didn’t have a lot of confidence in them when they were released, and didn’t bother promoting them much.  Sometimes, as with the classic Shane, westerns were thought to be low-prestige releases generally, and they were allowed to sit on the shelf.  But on release, audiences flocked to see Shane, and it was a big hit.  The traditional Hollywood mentality tends to equate the money spent on production with the film’s quality.  Ride the High Country, for example, was much more appreciated in Europe on its initial release than it was in the U.S. because MGM didn’t accurately perceive what it had and its marketing effort and budget, like its production budget, were very low.  As one MGM executive told screenwriter William Goldman, “it didn’t cost enough to be any good.”  By now everybody fond of westerns knows that, regardless of its original cost, it is very good indeed.

The other reason may simply be changing tastes and the test of time.  Some that were not greeted with great public enthusiasm at the time of their initial release are regarded more fondly fifty or sixty years later, when their quality may be more obvious simply because they are still watched after all these years by new generations with different tastes and different social attitudes.  John Wayne’s The Alamo was released with great hype in 1960, and was nominated for an Academy Award as Best Picture.  It wouldn’t be nominated, if it were released now.  The original 3:10 to Yuma, from 1957, was a low-key release by a very good director of westerns (Delmer Daves) that is, if anything, even more highly regarded now that it was in the 1950s.

Even in the video-DVD age, two of these were not available on DVD until 2020.

If there are any of the movies on this list that you haven’t seen, they’re all worth a watch.  If you have any other nominees for this list, leave a comment.  When you’ve digested this list, check out our second post on underrated westerns. 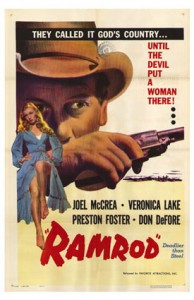 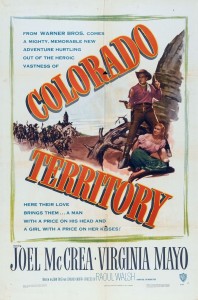 These three movies from the late 1940s share a common thread:  Joel McCrea.  At that time McCrea was doing a Randolph Scott—i.e., he was transitioning to making mostly if not entirely westerns, after a career in which he had done mostly non-westerns.  Unlike Scott, he either had stronger material or was just a stronger screen presence, because his westerns in the late 1940s and 1950s were better than those in Scott’s pre-Boetticher period, even if Scott was bringing in more at the box office.  These three films all have different directors, and in two of them McCrea uncharacteristically plays an outlaw, albeit an outlaw trying to go straight.  The best of these three is Colorado Territory with Virginia Mayo, director Raoul Walsh’s remake of his gangster movie High Sierra as a western.  Four Faces West, in which McCrea stars with real-life wife Frances Dee, is the kind of story one doesn’t see in westerns these days—an outlaw wrestling with moral dilemmas without a lot of outward violence, although there’s recurring tension.  In Ramrod, McCrea re-unites with Sullivan’s Travels co-star Veronica Lake in a tense range war tale.  All very good, and none of them often seen these days.

In the 1950s and into the early 1960s, there were two directors who, if you saw their names on a western, you could be sure you were in very good hands:  Delmer Daves and John Sturges.  Neither has the cachet of John Ford or Howard Hawks these days, but they both produced an excellent body of work.  Escape from Fort Bravo, starring William Holden and Eleanor Parker, is a tale of Confederate prisoners held in the Arizona desert, while everyone is threatened by Apaches.  This may be Sturges’ best work from his early period.

If any John Wayne film can be said to be underappreciated, this is.  It tends to get lost between John Ford’s cavalry trilogy and The Searchers, and that may be because it’s not directed by John Ford and because it was part of the brief 3-D fad of the early 1950s.  Wayne is excellent as curmudgeonly Apache scout Hondo Lane, playing off Geraldine Page as a widow isolated on an Arizona ranch and threatened by Indians.  It was largely unavailable for decades, and it’s very good.  Not all of John Wayne’s movies were good, but this is.

This is a small western with a small but excellent cast and a very low budget.  The balding, heavy-set William Conrad (who produced the film) is deputy sheriff Chris Hamish, who goes into Mexico to extract wanted gunman Bob Kallen, played superbly by Anthony Quinn.  Kallen is better with a gun and with people, but their relationship develops into a mutual respect on the ride back, threatened by Apaches and bringing along an orphaned mute girl who prefers Kallen to Hamish, too.

Gar Davis (Clint Walker), pursued by a posse, fakes his death in Comanche country and comes to an isolated ranch owned by a widow and her son (echoes of Hondo).  If they sell him a horse, he promises to try to get them to Fort Dobbs, where they hope to be safe.  They encounter devious gunrunners, hostile Comanches, and, when they get to Fort Dobbs, they are far from safe.  In addition to the Comanches, Davis still has to elude the posse after him.  This small-budget western, also featuring Virginia Mayo and Brian Keith, was directed by Gordon Douglas, like Rio Conchos, below.

Another low-budget western, filmed in black and white in a time when most movies were turning to color.  Like Ramrod, this was directed by journeyman director Andre de Toth and might be his very best movie.  It lacks major star power, but in its two main roles it has Robert Ryan and Burl Ives, who could be very good with the right material.  They have it in this wintry ranchers versus outlaws story set in remote Wyoming. 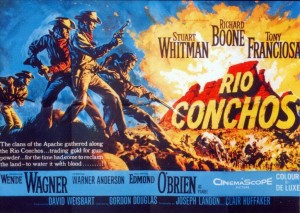 One can almost hear the studio executives wondering what to do with this, given a relative lack of star power (Richard Boone, Stuart Whitman and Jim Brown, who is without many lines in his first movie role).  Whitman and Brown are Union soldiers immediately after the Civil War who have to go into hostile Mexican territory to retrieve stolen rifles, using a wagon of gunpowder as bait.  Boone is an embittered, Apache-hating former Confederate officer forced to go with them, and Tony Franciosa a knife-wielding Mexican of uncertain loyalties.  It works better than you’d expect because of (a) Boone’s dominating performance, (b) good writing by Clair Huffaker, who also wrote the novel on which this is based, and (c) pretty good direction from Gordon Douglas, who made a lot of movies of all kinds, usually well enough but without dazzling anybody.

James Garner was a better actor than he’s usually given credit for, and he demonstrates it here without any of his normal easy-going charm.  But this cavalry versus Apaches story is also an ensemble movie, with Sidney Poitier (out of his element in a western, but doing a good job) as a former Buffalo soldier sergeant and Scotsman Bill Travers as an up-from-the ranks cavalry officer in a desperate position.

One of the last cavalry movies, and certainly the last good one until 2017 (Hostiles).  This, like Soldier Blue, is kind of a 1970s revisionist cavalry western, but it’s better than Soldier Blue.  Burt Lancaster is the Old Scout leading the Young Lieutenant Bruce Greenwood and his patrol in pursuit of Apache leader Ulzana, who has jumped the reservation.  The revisionism lies in showing the Apaches as people rather than just savages, and in showing a tendency toward savagery by both Apaches and cavalry in desperate situations.  The Apaches are seen as strategists, whose moves have to be deciphered and countered by the Old Scout.

This is one of those that was long not available on DVD, and that’s why it was hard to see until recently.  It was finally released on DVD and Blu-ray by Kino Lorber in 2020.  Even on its initial release, this Canadian production was shown mostly in art houses and has never found a wide audience.  This story of turn-of-the-century stage and train robber Bill Miner has a superb leading performance by long-time stuntman and bit-player Richard Farnsworth.  But the supporting performances, especially that of Jackie Burroughs as a liberated, modern (for then) female photographer, are also very good.  This is a gem that you should waste no time in seeking out, now that it’s finally available.

Similarly, this small relationship-oriented western was not available on DVD until 2020.  The relationship in question is based on a real historical one, between gambler Charlie Bemis (Chris Cooper) and Lalu, usually referred to as China Polly (Rosalind Chao), in an Idaho mining camp.  Lalu has been sold by her impoverished family in China and brought to the Golden Mountain (the U.S.), where she can expect to be further sold into prostitution.  Most of the tension is produced by friction between whites and Chinese in the mining camp.  This is also one of the few westerns directed by a woman, Nancy Kelly.

Walter Hill is one of the best living directors of westerns, along with Clint Eastwood and Kevin Costner.  He has done the best Jesse James movie (The Long Riders) and an excellent trail drive story with Robert Duvall (Broken Trail), both among the 55 great westerns.  He has also come up with a dud in Wild Bill, the story of Hickok, so he’s not infallible.  But he has an innate feel for westerns, and it shows in this story of the U.S. cavalry’s trying to track down Geronimo and negotiate a surrender to the last of the Apache wars.  He uses real historical characters in old scout Al Sieber (Robert Duvall), young officers Lt. Charles Gatewood (Jason Patric) and Britton Davis (a young Matt Damon) and Apache scout Chato (Steve Reevis), along with Geronimo (Wes Studi) and Generals George Crook (Gene Hackman) and Nelson Miles (Kevin Tighe).  There is a developing sympathy among the cavalry scouts for the Apaches, and the end result makes for difficult choices for the young officers.

This western comedy is another Canadian production that few saw; not even Canadians went to see it.  However, with its dry humor it is the sort of thing that doesn’t get made much.  A western comedy is very hard to pull off well.  This features Paul Gross as The Montana Kid, who finds himself in the Canadian frontier town of Barclay’s Brush, trying to apply his gunfighter’s code to a very different sort of people than he usually runs into.  It causes him to reconsider the teachings of Aristotle, his line of work and his place in the world, along with finding ways to deal with pursuing bounty hunters from the States.  It deserves to be much more widely seen. 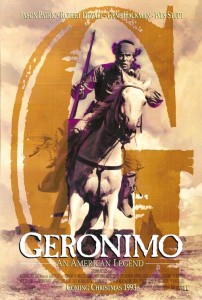 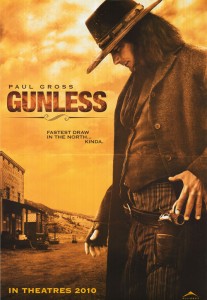