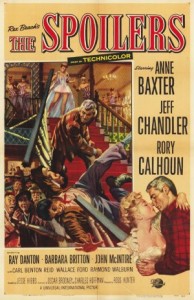 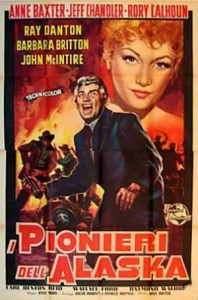 This is the fifth and most recent version of Rex Beach’s oft-filmed novel of claim-jumping, fraud and larceny in the Alaska gold rush of 1899.  Like some of the other frequently re-made stories from the earlier years of the movies (The Virginian, Whispering Smith), this one hasn’t been done again in 60 years, as tastes in stories and forms of entertainment have changed.  This story and various of its elements (the culminating fight scene, the female saloon owner in love with the good guy, the shared mine ownership, the con-man claim-jumping mastermind) obviously influenced better Alaska gold rush movies such as 1954’s The Far Country and 1960’s North to Alaska.  The 1930 version of the story with Gary Cooper is apparently lost; the 1942 version with John Wayne and Randolph Scott is generally thought to be the best, especially its climactic fight scene.  This one is watchable but not exceptional.

As the movie opens, the arrival of Roy Glennister (Jeff Chandler) and his partner Dextry (John McIntire) on the boat from Seattle is anticipated by his girlfriend, saloon owner and dance-hall girl Cherry Malotte (Anne Baxter).  There have been a number of claim-jumping incidents recently, and nobody knows where the new gold commissioner Alexander McNamara (Rory Calhoun) will come out on these things.  When the steamer arrives, Cherry is chagrined to find that Glennister has apparently been keeping company with the new federal judge’s attractive young niece, and she and Glennister have an explosive break-up.  Concern over claim-jumping dies down as the new judge generally seems to find for the original claimants.  But when Glennister and Dextry are served with a warrant about a competing claimant, we start to see that McNamara is crooked and has hired a fake federal judge.  He intends to take Glennister and Dextry’s existing $80,000 in gold and take another $250,000 from their claim while they wait for their case to be heard.  It never will be. 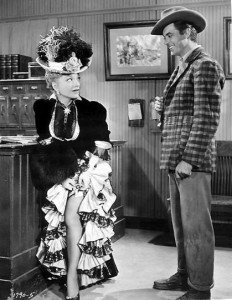 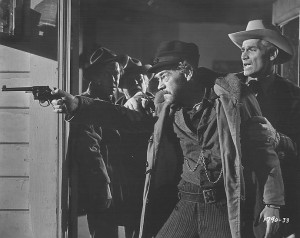 Originally Glennister takes a more law-abiding view than Dextry, but at this point he sees that things are crooked and stacked against them.  They try to take the gold from their sequestered safe, and the marshal is killed in the process—shot in the back by Cherry’s dealer Blackie (Ray Danton, who had a short-lived but memorable career as a bad guy in the 1950s before drifting into mostly television work). Blackie is apparently playing his own anti-Glennister game because he wants Cherry, too.  Glennister is blamed for the marshal’s death and thrown into jail, where McNamara plots to allow him to escape and then shoot him down in the process.  Cherry hears of the plan and aids a real escape for Glennister.  Glennister and Dextry violently take back their mine while McNamara is distracted by Cherry in town.  Blackie is killed in a train crash during the recovery of the mine, but not before admitting his killing of the marshal.  Glennister confronts McNamara and they engage in a lengthy fist fight that virtually destroy’s Cherry’s Northern Saloon.  McNamara’s gang is apprehended (including the comely faux-niece), and Glennister and Cherry are back together.

Chandler gives a serviceable performance, as does Calhoun.  The best are probably Anne Baxter and John McIntire (who had played the principal claim-stealer in the previous year’s The Far Country).  Anne Baxter’s most famous role was in All About Eve, of course, but if you’d like to see her in another good western, check out Yellow Sky.  In color. 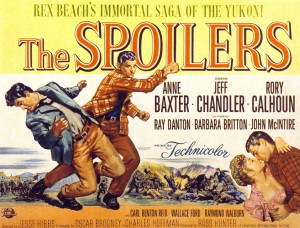 The films are based on Rex Beach’s 1906 novel, which was in turn based on the exploits and machinations of real-life Nome crook and claim-jumper Alexander McKenzie, who served three months in jail before being pardoned by Pres. McKinley in 1901.