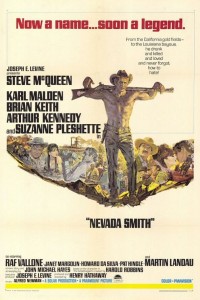 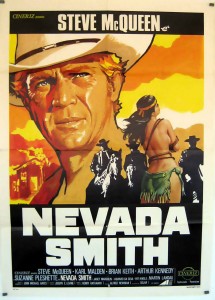 This episodic vengeance western is one of Steve McQueen’s few works in the genre.  Uneducated young Max Sand (McQueen) is the product of a mixed marriage—a white father and a Kiowa mother.  He finds his parents brutally killed by three outlaws and sets out to kill them all.  On the way he runs into gunsmith Jonas Cord (Brian Keith), who teaches him to shoot, along with various other survival skills.

The first of the killers he finds is a gambler in Abilene, Jack Langley (real name Jesse Coe, played by Martin Landau).  Sand kills him in a knife fight, although he is badly wounded himself, saved only by the McGuffey reader stuffed in his shirt.  He is nursed back to health by Kiowa dance hall girl Neesa (Janet Margolin). 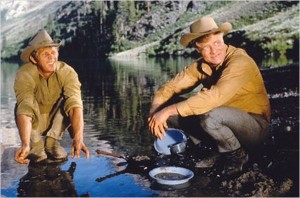 He learns that Billy Bowdre (Arthur Kennedy) is in a prison camp in the Louisiana swamps, after an unsuccessful bank robbery.  Sand gets himself thrown in prison to find Bowdre.  Sand and Bowdre escape through the swamps with the help of young Cajun Pilar (Suzanne Pleshette), who is bitten by a snake and doesn’t make it.

The third is Tom Fitch (Karl Malden in a bad-guy role) in the California gold country, where he has an outlaw gang.  Sands has tracked him down calling himself Fitch’s brother, but Fitch is now paranoid about Max Sand.  Fitch’s men bust him out of jail and all but kill him when they find he isn’t the outlaw.  They leave him for dead and he is nursed back to health by a Catholic priest.  He joins Fitch’s outlaw gang for a big job, and in the middle of the job takes after Fitch, whom he shoots to pieces but can’t bring himself to finish off.  Presumably then he joins up with Jonas Cord again. 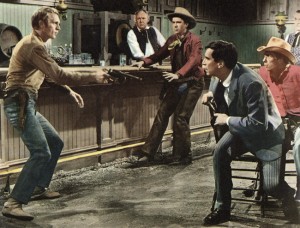 This is based on two characters (Jonas Cord and Nevada Smith) from a sleazy Harold Robbins novel, The Carpetbaggers, which had been a successful movie two years earlier.  (Nevada Smith was played by Alan Ladd in that one, in his last movie role; he doesn’t look half-Kiowa, either.)  Well-produced and directed by old veteran Henry Hathaway, it looks good but the plot doesn’t hang together real well.  Characters feel manipulated (or tossed away) rather than developed except perhaps for Sand.  Cinematography by Lucien Ballard; music by Alfred Newman.  Watchable but not terribly memorable.

Blond, blue-eyed McQueen at 36 seems old for the young Sand, and he certainly doesn’t look half Kiowa.  Brian Keith may be the best actor in the film; Howard da Silva is good as the Louisiana prison camp warden and Pat Hingle as a prison trusty.  Iron Eyes Cody, Strother Martin and L.Q. Jones have uncredited bit parts.  A dark-haired Loni Anderson has an uncredited bit part as a dance hall girl in the first half of the film.  Filmed in the Owens Valley desert and in Inyo National Forest. 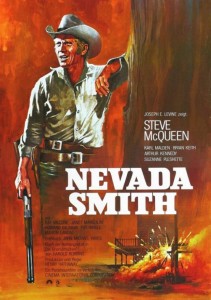 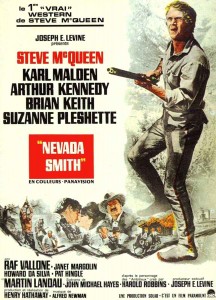