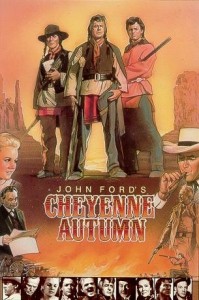 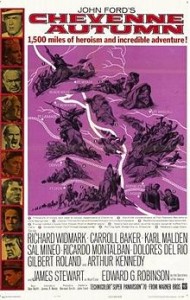 This is the self-consciously epic story of the Northern Cheyennes’ escape from Indian Territory back to their northern homeland in late 1878.  It’s unusual to see a John Ford movie with this level of pretentiousness—overture, entr’acte, etc.

The Cheyennes, led by Dull Knife (Gilbert Roland) and war chief Little Wolf (Ricardo Montalban), are slowly dying at their Indian Territory (now Oklahoma) agency run by ineffective Quakers.  When their attempts to get action from Washington fail, they depart in the middle of the night, heading 1500 miles northward.  Their Quaker schoolteacher Deborah Wright (Carroll Baker) goes with them, caring for their children.

Once they cross the Canadian River marking the border of Indian Territory, they are in breach of their treaty and are pursued by cavalry led by sympathetic Capt. Thomas Archer (Richard Widmark).  Archer is also romantically interested in Wright, but there’s little apparent chemistry there.  Among the Indians are Spanish Woman (Dolores del Rio), Dull Knife’s wife, and his son Red Shirt (Sal Mineo), a hot-headed young warrior interested in Little Wolf’s younger wife, and elder Tall Tree (Victor Jory).  The troopers include Lt. Scott (Patrick Wayne, also headstrong in wanting to avenge his father’s death in the Fetterman Massacre) and Troopers Plumtree (Ben Johnson) and Smith (Harry Carey, Jr.), subject of a running joke when Archer can’t remember his name.  The Indians set a successful trap for the cavalry; Scott is wounded and the Cheyennes escape to the north.

After the interlude, the Indians are suffering terribly from hunger and exposure in the snow.  They split, with half following Dull Knife to seek food and shelter for the women and children at Fort Robinson in northwestern Nebraska.  The others, under Little Wolf, continue north.  At Fort Robinson, commanded by German Capt. Oskar Wessels (Karl Malden), the Cheyennes are imprisoned in a warehouse and denied food and warmth until they agree to head back to Indian Territory immediately.

Archer heads to Washington, D.C., to try to help, and surprisingly encounters a sympathetic Secretary of the Interior in Carl Schurz (Edward G. Robinson).  They head west together by train.  Meanwhile, Dull Knife’s band breaks out of Fort Robinson, with about half of them apparently killed.  They make it to Victory Cave in the Black Hills, where they reunite with Little Wolf.  When Schurz and Archer find them there, they’re about to be fired on by the local cavalry until Schurz brokers a deal that will let them stay in the north.  Archer and Wright apparently marry and adopt a Cheyenne girl hurt during the exodus.  Little Wolf kills Red Shirt.  Life goes on.

This is Ford’s last film, but not one of his best.  There’s a patronizing tone not unexpected in the 1960s, and the mix of pathos and sentimentality is not in good balance.  Desolate Indian Territory looks surprisingly like the Monument Valley or Arches National Park (Moah, Utah), as does everything between there and their northern homeland.  The Earp-Dodge City interlude is just plain awful.  Sal Mineo doesn’t look much like a Cheyenne; Roland, Del Rio and Montalban (all of Mexican ancestry) are quite noble and effective.  Most of the actual Indians are the Navajos Ford frequently used on his films, not Cheyennes.  Cinematography is by William Clothier, music by Alex North.  Based on the Mari Sandoz book.  Long for its time, at 154 minutes. 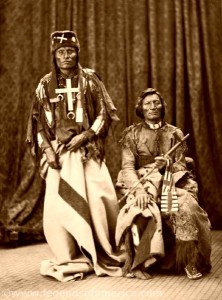 The real Little Wolf and Dull Knife; the photograph was taken in Washington, D.C., in 1873.  The Northern Cheyennes were finally given a reservation adjacent to their long-time enemies the Crows in southeastern Wyoming, on the Little Bighorn, where Little Wolf died in 1904.  Dull Knife ended up (by choice) on the Pine Ridge Sioux reservation in South Dakota, where many of his descendants still live.  The real story of the Northern Cheyennes trying to flee the army northward is one of the more heart-wrenching of Indian history.  If you’re interested in the real story, start with Dee Brown’s chapter in Bury My Heart at Wounded Knee (good writing but not unbiased and now more than 40 years old), and then go on to one of the more extended (and balanced) accounts of recent years.  This movie has its roots in the story, but is not as affecting.