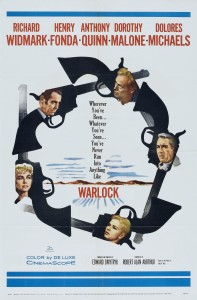 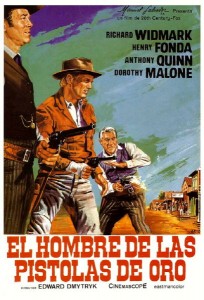 This excellent psychological western feels overstuffed, with a little too much plot and more good actors than it quite knows what to do with. It has two competing town tamers, one legitimate and the other less so, a Doc Holliday-character with a spotted history, a scarlet woman (often really dressed in scarlet), a wealthy if inexperienced young mining heiress, and a Clanton-esque gang of cowboy-outlaws, all coming together in one town where the law is not working.

Warlock is a mining and ranching town in Utah, but so remote that the county sheriff seldom makes an appearance.  There is a town marshal of sorts, but the opening scene shows him getting run out of town by Abe McQuown (McEwen?  McCune?  Played by Tom Drake), head of the San Pablo ranching crowd.  He’s presumably a rancher, but of the Ike Clanton sort—given to various forms of crime (rustling, stage robbery) and intimidation of the town.  His men, including Johnny Gannon (Richard Widmark), his brother Billy (Frank Gorshin, uncredited) and Curley Burne (DeForest Kelley), appear to be a bunch of thugs and back-shooters.

The local citizens send for gunman Clay Blaisdell (Henry Fonda) from Fort James, a sort of marshal-for-hire.  He brings with him Tom Morgan (Anthony Quinn), a gambler-gunman with a clubfoot, who sets up his own saloon-casino (calling it “The French Palace,” a sign they have brought with them) and who keeps off the backshooters.  Blaisdell has pleasant manners but few illusions about the cycle of civic support and distaste he can expect.  “I’m a simple man, handy with Colts,” of which he has a gold-handled pair that he only uses for Sunday best.  He gets paid a lot for his skills ($400 a month), but he expects his sojourn in Warlock will be brief.  The citizenry will soon have second thoughts about the gunman they have brought in to impose law in their town.  Blaisdell wastes no time in confronting the San Pablo gang, which he initially does effectively but without bloodshed.

Johnny Gannon appears to be having second thoughts about his participation in the San Pablo gang as well.  Lily Dollar (Dorothy Malone), a former saloon girl with a past relationship with Morgan, shows up.  She was bringing a brother of Ben Nicholson, whom Blaisdell had once killed.  She seems to be trying to get back at Morgan, and thinks killing Blaisdell may be the quickest way to do that.  However, the brother is killed by Tom Morgan with a rifle during an attempted stage holdup by the San Pablo gang.  Two of the San Pablo men (including brother Billy Gannon) are arrested and Blaisdell saves them from being lynched.  They are ultimately let go in a legal proceeding in the county seat, Bright City, by a jury intimidated by McQuown.  The distant sheriff visits, doesn’t like Blaisdell’s presence, and points out to the crowd that none of them will take the deputy sheriff’s job.  But Johnny Gannon does, which sets his new authority in potential opposition to Blaisdell’s.

Meanwhile, Blaisdell quickly develops a relationship with young mining heiress Jessie Marlow (Dolores Michaels) and begins to think about marrying her and putting down roots.  Johnny Gannon forms a relationship with Lily Dollar.  Tom Morgan would prefer that neither of these happen; he wants Blaisdell to think of moving on to the next town, Porfiry City.

Blaisdell to new deputy sheriff Johnny Gannon:  “I remember when I first killed a man. It was clear and had to be done.  Well, I went home afterward and puked my insides out.  I remember how clear it was.  Afterwards, nothing was ever clear again.  Except for one thing.  That’s to hold strictly to the rules.  It’s only the rules that matter.  Hold onto ’em like you were walking on eggs.  So you know yourself you’ve played it as fair and as best you could.  But there are things to watch for … in yourself.  Don’t be too fast.  When there are people after you, you know it and you worry it.  Then you think, ‘If I don’t get drawn first and then kill first–.’  You know what I mean?”

Blaisdell has posted the San Pablo gang, meaning that they can’t enter town without an armed confrontation with Blaisdell.  Brother Billy Gannon and another come into town in defiance of that posting.  Gannon tells Billy, “I ain’t backin’ him, because you’re my brother, and I ain’t backin’ you, because you’re wrong.”  Blaisdell, with a slight deference to Gannon, tries not to kill Billy but is left with no choice.  Gannon, thinking to avoid further such bloodshed, goes to the San Pablo ranch to dissuade them from coming to town.  They beat him up, and Abe McQuown puts a knife through his right (gun) hand.

When the gang comes in force, Lily begs Blaisdell to help Gannon.  He’s willing, but Gannon insists that it’s his duty alone.  He tries to help anyway, but Tom Morgan holds him out with a gun, revealing the truth about the Nicholson brothers and their deaths.  When Gannon confronts the gang, one of them, Curly, unexpectedly keeps off the backshooters and the wounded Gannon is even more unexpectedly successful with the help of a few of the townsfolk.  But he’s not done.

Tom Morgan doesn’t like the way things have gone, with Gannon having become the local hero, and has been drinking heavily.  He tries to push Gannon into a shootout.  Blaisdell intervenes now, locking Gannon in one of his own cells and killing Morgan, going slightly crazy.  Gannon then orders Blaisdell out of town, and Blaisdell says he won’t go, setting up yet another confrontation the next morning. 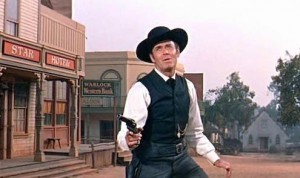 As Blaisdell walks down the street the next morning, he’s wearing the gold-handled Colts.  Gannon’s wounded hand doesn’t work very well, and Blaisdell outdraws him easily with his right hand.  Then he throws the gun in the dirt.  He outdraws him again with his left hand, and throws that Colt in the dirt, too.  He gets on his horse and rides out of town, seemingly leaving Jessie behind.

This is black-listed director Edward Dmytryk’s best western, and it put him back in the directing mainstream.  Richard Widmark has top billing, but Henry Fonda has the dominant character.  Anthony Quinn is excellent, and so is Dorothy Malone.  Tom Drake and DeForest Kelley are both very good in smaller roles.  Dolores Michaels is adequate but mostly forgettable.  Based on a very good novel by Oakley Hall, the story brings with it echoes of the Wyatt Earp story and of Fonda as mentor to an inexperienced lawman, as in Anthony Mann’s The Tin Star two years previously.  It has a memorably articulate screenplay by Robert Alan Aurthur.  Leigh Harline, who had won Academy Awards for Pinocchio (1940) and done the music for Broken Lance, among many others, provided an excellent score.  Shot in color around Moab, Utah, and on the 20th Century Fox lot. 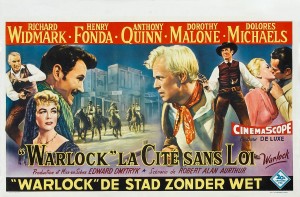 This is another of those 1950s westerns that makes a point about about how townspeople are uneasy with those they hire to enforce the law and with the violence used to do it (e.g., High Noon, The Tin Star).  But it has a lot of other things going on, too.  It moves right along and could probably have been a bit longer, to wrap up some of the plot’s loose ends.

Dorothy Malone was in several good westerns, from Colorado Territory to Quantez to The Last Sunset.  DeForest Kelly showed up as a gang member in other films, like The Law and Jake Wade and Tension at Table Rock, and this is one of his best.  Richard Widmark and Henry Fonda were at the peaks of their careers in westerns, although they would continue to make more through the 1960s, with Fonda moving into a couple of memorable spaghetti westerns (Once Upon a Time in the West, My Name is Nobody) around 1970.  Anthony Quinn, who was always good in westerns (The Ride Back, Man from Del Rio, Last Train from Gun Hill), did not make many more, moving more into ethnic roles in big movies (The Guns of Navarone, Zorba the Greek, Lawrence of Arabia).  Silent film star Richard Arlen has a small supporting role.