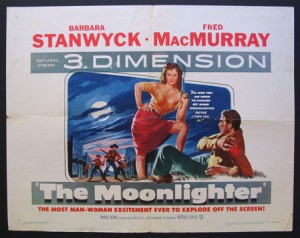 Fred MacMurray and Barbara Stanwyck had been making movies together since 1940’s Remember the Night, and of course their best-known collaboration was in one of the screen’s all-time greatest films noir:  Double Indemnity (1944).  This time they’re in a western, and, while pleasant enough to watch, it’s not in the same category as Double Indemnity.  It’s probably the weakest of their four films together.

The film starts with Wes Anderson (MacMurray) in jail, having been arrested as a moonlighter—one who rustles cattle by moonlight.  He is in fact guilty, but an irate rancher wants to lynch him.  Circumstances conspire so that they hang the wrong man (as in The Ox-Bow Incident), and a black man in the jail sings spirituals so we’ll get the connection with more modern lynching in the American south—also like The Ox-Bow Incident.

Anderson escapes and arranges for a funeral for the supposedly deceased Wes Anderson, robbing those who attend to pay for the festivities.  He takes some revenge on the spread that did the lynching and heads home for Rio Hondo after a five-year absence with a wound in his shoulder. 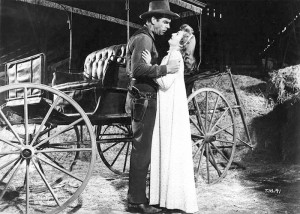 His brother Tom (William Ching) works respectably in the local bank and has finally convinced Wes’ former girlfriend Rela to marry him.  However, Tom gets fired, and Cole Gardner (Ward Bond), an old outlaw acquaintance of Wes’, shows up with a plan to rob the bank.  Wes tries to keep Tom out of the plan, but Tom now insists on being included.  As they escape, his former employer pulls a hidden gun and shoots Tom in the back.  Wes and Cole make their escape in the bank president’s horseless carriage, placing the time of this movie around 1900.

As Wes and Cole hole up in a remote cabin, a posse searches for them ineffectively.  But Rela knows where they probably are, and she convinces the sheriff to deputize her.  Meanwhile, Cole decides he doesn’t want to share the loot.  He and Wes fight, and, hampered by his wounded shoulder, Wes is knocked out and tied up.  As Cole descends the mountain, Rela spots him and a gun battle breaks out between them.  Rela eventually wins, finds Wes and unties him.  She insists they go down the dangerous way.

As Rela and Wes cross under a waterfall, Rela slips and falls in a pool.  Wes could escape but chooses to rescue her and he takes her back to the remote hideout.  They have a discussion with lots of “suddenly I realized …” on both sides.  Rela always loved Wes and he loves her.  Now he’s decided to turn in himself and the money so that he and Rela can be together when he gets out of jail.  (He’s ignoring the fact that under the felony murder rules, he is likely to be accused of Tom’s murder, since it happened in the commission of a felony in which he was participating.)  Anyway, the second ride down the mountain goes smoothly, and they fade out. 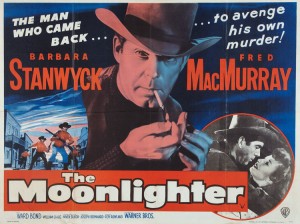 The action sequences (the jailbreak and lynching, and the fight between Cole and Wes, for example) are good.  But all of the sudden realizations are not convincing.  At the least, they needed more time to develop.  It brings to mind the ending of Remember the Night, which was not quite as unsatisfying.  MacMurray and Stanwyck rekindle their relationship in 1956 in Douglas Sirk’s melodrama There’s Always Tomorrow.  And MacMurray is better in 1957’s Quantez.  In black and white.  Short, at 77 minutes.  Like John Wayne’s Hondo and Raoul Walsh’s Gun Fury, The Moonlighter was originally shot in 3-D during Hollywood’s brief flirtation with that technology in the early 1950s.