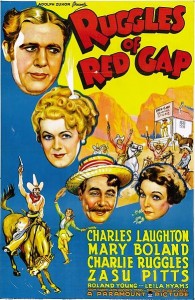 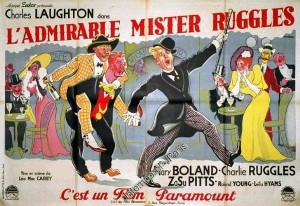 Nominated for Best Picture in 1935, this is a charming comedy of manners and a traditional eastern-tenderfoot-goes-west story—more a comedy of manners than a western, though.  Originally it was a novel by Henry Leon Wilson, published in 1915.  The stage version by Harrison Rhodes opened on Broadway the same year, and it had been made at least twice as a silent film (1918 and 1923, with a young Edward Everett Horton as Ruggles).  It is apparently only a coincidence that a film with the uncommon name “Ruggles” in the title also stars an actor with the name Ruggles (Charlie Ruggles, to be exact).

The titular Ruggles (Charles Laughton) is a traditional English “gentleman’s gentleman,” or valet, in Paris in 1908 with his long-time feckless employer, the Earl of Burnstead (Roland Young).  As the film opens, the hung-over Earl haltingly tells Ruggles that in a game of draw poker the previous night, the Earl had lost Ruggles’ services to the Flouds, Effie (Mary Boland) and Egbert (Charlie Ruggles), a nouveau-riche couple from the American west.  Effie has social pretensions and sees Ruggles as a way to add polish to her image at the top of the social pyramid back in Red Gap, Washington.  Egbert is a thorough-going egalitarian in the folksy western mode, referring to Ruggles as “Colonel” and “Bill,” although he is actually neither.  It is clear that Egbert is dominated by his wife in most ways; the question is whether some of his better instincts will be overridden by Effie, especially once they are back in their own environment. 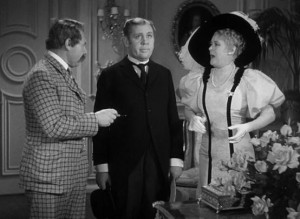 With the Flouds in Paris.

Egbert is fond of loud checked suits; Effie has Ruggles oversee his outfitting in more formal British attire, to which Egbert does not take well.  Egbert and Ruggles bond over drinks at a sidewalk cafe (which Ruggles does not handle well) and an increasing sense of being under siege from the determined Effie.

Once back in Red Gap, Ruggles is introduced to Egbert’s circle of friends, a congenial, hard-drinking bunch led by young blonde Nell Kenner (Leila Hyams), who now all take him to be a colonel retired from the British army.  Effie is torn between liking the Colonel’s social cachet and wanting a traditional British servant, the role in which she originally saw him.  Effie’s mother is Ma Pettingill (Maude Eburne), the source of the family’s oil money, with a personality and approach more like Egbert’s.  Effie’s sister is married to Charles Belknap-Jackson (Lucien Littlefield; we know from the name that he’s pretentious—Americans don’t really take to hyphenated names), a social climber from Boston who sees Ruggles as a threat to his standing in the family and wants to get rid of him. 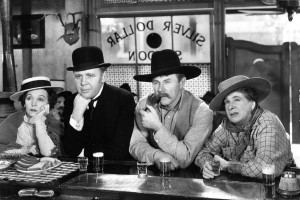 In Red Gap, Egbert finds it easier to stray from under Effie’s thumb than he did in Paris, with Ma’s support.  Ruggles meets Mrs. Prunella Judson (Zasu Pitts), a widowed cook who gives him the idea of using his culinary talents to open his own restaurant in Red Gap, again with Ma Pettingill’s support.  Meanwhile, he also imbibes American ideas of equality much at odds with the traditional British social hierarchy which he has upheld all his life.  There is a moving scene in a bar, when Ruggles recites the Gettysburg Address and the patrons (including Ruggles himself) fall under the spell of Lincoln’s words. 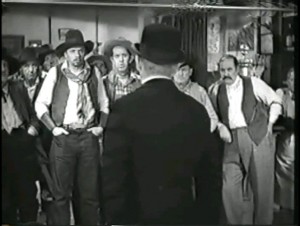 Ruggles and the Gettyburg address in a barroom.

Matters come to a head when the Earl of Burnstead comes to visit.  Being a decent if muddled chap, he falls in more with Egbert’s congenial egalitarianism than with Effie’s maneuvers toward social supremity.  He is also taken with fun-loving Nell Kenner.  Belknap-Jackson takes advantage of the absence of Egbert and Ma to fire Ruggles, but they haven’t really left town and take him right back.  Ruggles does open his upscale restaurant to considerable acclaim, and throws out Belknap-Jackson on opening night when he behaves badly.  Ruggles is still stuffy and British, but he has also become American, an egalitarian, an apparently successful restaurateur and his own man. 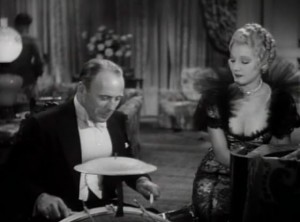 Nell Kenner (Leila Hyams) teaches the Earl of Burnstead (Roland Young) to play the drums, in an improvised scene.

To modern eyes, several of these characters are stereotypes.  Effie is a fluttery, domineering 1930s nouveau riche aging wife.  Ma is a rough, take-them-as-they-come sort who doesn’t take her daughters’ pretensions very seriously.  Egbert is a slightly addled hen-pecked but well-meaning western sort with lots of aw-shucks dialogue, but Charlie Ruggles somehow manages to give him a little more direction and initiative when called for.  Ruggles and Boland were frequently teamed on screen in the 1930s; they made fourteen movies together at Paramount.

It is Charles Laughton’s performance as Ruggles that elevates this beyond the ordinary, though.  According to the film’s editor Edward Dmytryk (later the blacklisted director of Warlock and Alvarez Kelly), Laughton became so emotional during the scene with the recitation of the Gettysburg Address that it took director Leo McCarey (Duck Soup) a day and a half to film it.  In Nazi Germany, versions of the film dubbed in German were banned because of that scene and Lincoln’s Address.  Laughton later recited the speach to the cast and crews when filming Mutiny on the Bounty (1935) and The Hunchback of Notre Dame (1939), and became an American citizen in 1950.  Daily Variety reported that “for the first time in pictures, he [Laughton] has not been cast as a psychopathic subject.” 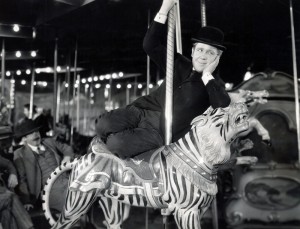 1935 was an extraordinary year for Charles Laughton.  He had starring roles in three films nominated for Best Picture:  Ruggles in Ruggles of Red Gap, Captain Bligh in Mutiny on the Bounty and Javert in Les Miserables.  This is of course the lightest of the three, and it’s still enjoyable to watch.  But it’s not really very western.

This movie was made yet again in 1950 as Fancy Pants, starring Bob Hope as an undistinguished actor hired to play a butler for a family (in Arizona this time) expecting a presidential visit from Theodore Roosevelt, with Lucille Ball.  In 1957, the television anthology Producer’s Showcase presented a new musical version with Michael Redgrave as Ruggles, teamed with Jane Powell, David Wayne, Imogene Coca, Peter Lawford, Paul Lynde and Hal Linden, with songs by Jule Styne.  The 1935 movie version is still the best.