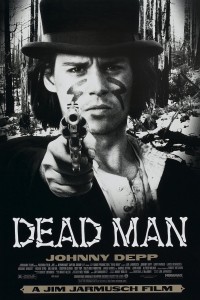 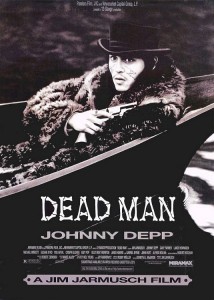 “It is preferable not to travel with a dead man.”–Henri Michaux

Jim Jarmusch is a cult figure among film makers.  His films are not like anybody else’s, and that includes this one, his sixth.  This is a western because it appears to be set in the American west and involves traditional kinds of figures from westerns—Indians, trappers, outlaws, marshals, whores, etc.  But it doesn’t use them in traditional ways.  A recounting of the film’s slow-moving plot doesn’t really convey how this often-surreal movie feels.  This is one of those movies that’s at least as much about mood and perhaps allegory as it is about story.

This is one of two westerns in which Johnny Depp has appeared (along with The Lone Ranger), and so far he has never been a traditional western protagonist.  As the film opens, a young, bespectacled and recently-orphaned accountant named William Blake (Depp) is on a train headed west from Cleveland, wearing a loud plaid suit.  Despite his name, he knows nothing of the English poet and artist.  The scenery changes, and so do his fellow passengers.  Finally, they are mostly rough, fur-clad hunters and trappers.  A fireman on the train speaks to him darkly about the area into which he is headed, describing it as hell.

And it seems perhaps it is.  Blake’s destination is a town named Machine at the end of the line (apparently in the northwest), where he has an offer of a job from the Dickinson Metal Works.  As he gets off the train into the muck of the streets, it is clear that he is in a rough environment.  He makes his way to the office of the Dickinson Metal Works, a dark, satanic mill where the office manager (John Hurt) tells him the position has been filled.  Blake insists on seeing Dickinson (Robert Mitchum in his last film appearance), who chases him out with a shotgun.

As Blake emerges into the street, a young prostitute Thel (Mili Avital) is pushed into the muck of the street as well.  Blake helps her and is invited back to her room.  As they awaken the next morning, a young man named Charlie (Gabriel Byrne) walks into the room and wants to resume what has apparently been an unhappy romantic relationship.  He pulls a gun and shoots at Blake; Thel throws herself in front of the bullet, which gets Blake anyway.  Blake uses a pistol he finds under Thel’s pillow and kills Charlie, making his escape wounded out Thel’s window and taking Charlie’s horse.

When Blake regains consciousness, he is being tended by Nobody (Gary Farmer, with echoes of the spaghetti western My Name Is Nobody), of mixed tribal ancestry (apparently Blackfoot and Blood, two of the three tribes in the Blackfoot confederacy).  Nobody is unusually well-traveled and educated and takes Blake for the English poet.  He becomes Blake’s spiritual guide in a way, although Blake obviously needs his physical help as well.  Meanwhile, it turns out Charlie was Dickinson’s youngest son, and Dickinson puts a price on Blake’s head and hires three bounty hunters to get him.

Blake seems to be recovering from his wound, although Nobody could not remove the bullet from his chest.  At one point Nobody takes his glasses, and he seems to get through the rest of the movie fine without them.  The point seems to be, as Nobody says, that maybe he can see more clearly without them.  Blake encounters three hunters/killers (one dressed in a bonnet and dress, although he is male–Iggy Pop), and partly by intent but mostly by accident kills all three when they try to kill him.  At least he gets to eat their beans. 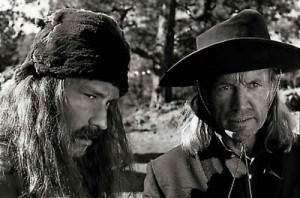 Michael Wincott and Lance Henricksen as bounty hunters:  “I’ll tell you one thing: If that there Blake fella keeps on shootin’ marshals I might end up likin’ the bastard!”

Back at his own camp, he finds two marshals waiting for him.  Again, through a combination of intent and fortuitous accident, the marshals are both killed, although Blake is badly wounded again.  He encounters Nobody again as well, and they stop at a store that Nobody says deliberately spreads disease to Indians.  The proprietor is willing to deal with Blake, but not with Nobody, whom he offers blankets (that may carry disease).  Blake shoots the proprietor but is getting weaker.

The three bounty hunters are trailing Blake and Nobody and arguing among themselves.  One (Lance Henricksen) kills the other two.  Nobody and the weakening Blake arrive at an Indian village on the Pacific, and Nobody puts in him a boat for his final voyage.  As Blake drifts out into the ocean (a metaphor for death?), in the distance he sees the final bounty hunter and Nobody kill each other.  Fade to black. 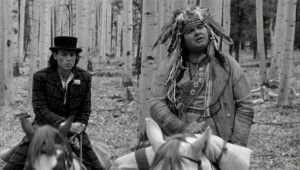 Blake (Depp) and Nobody (Gary Farmer) on their pilgrimage.

This has sometimes been referred to as an “oddball western.”  It is both oddball and not much of a western, despite the violence.  This film is interesting, but it is neither (a) a traditional western, (b) even a revisionist western under the usual understanding of that term, or (c) a surrealist allegorical masterpiece on man’s journey into the spirit world, unfair treatment of Native Americans or despoiling of the environment.  (It may be most of that last one, but it doesn’t feel like a masterpiece.)  This seems like it is probably one of those films discussed at some length in film schools.  Those who like it watch it multiple times and claim to see more in it from the repeated viewings.  It’s shot in black and white, with slow pacing and perhaps dream sequences and images.  Unconventional music is by Neil Young.  Rated R for violence, gratuitous filth, occasional brief nudity, lots of violence and heavy surrealism.  121 minutes.

There is frequent and not-terribly-meaningful violence, except that it allows Blake to continue on his pilgrimage.  It has a large cast, although, except for Depp, Farmer and Lance Henricksen, most of them make only brief appearances.  As Blake takes on the persona of the English poet more and more, things get more mystical.  At one point, Nobody paints Blake’s face as for war, and Depp wears the paint for the remainder of the movie.  By the end, Blake appears to be the Dead Man of the title and this is his voyage in that direction, although a lot of people are dead by that point. 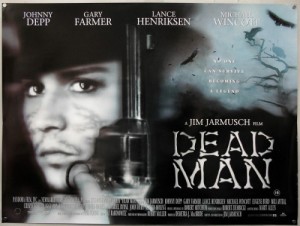 This was rather hilariously offered on a two-disc DVD set with Texas Rangers.  It’s hard to imagine two films with less in common, except that they both have Alfred Molina.  If you’d like to read an interesting 1996 interview with Jim Jarmusch about the film and how William Blake got into it, together with how Neil Young’s musical reaction was captured, check this out:  http://www.jonathanrosenbaum.net/1996/04/a-gun-up-your-ass-an-interview-with-jim-jarmusch-tk/H