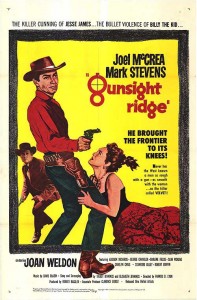 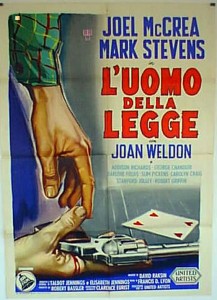 This late Joel McCrea film seems more formulaic than it ought to; somehow the whole is less than the sum of its parts.  McCrea, getting a bit long in the tooth (he was 52 at the time), plays Mike Ryan.  He and the attractive Molly Jones (Joan Weldon) are passengers on the stage to Bancroft near the Arizona border with Mexico, where her father is the sheriff.  On the way the stage is held up by two robbers, one of whom has distinctive eyes above his bandanna-mask.  During the robbery the other’s mask slips, and he is recognized by the stage driver (Slim Pickens in a small role).  Molly berates Ryan for not trying to thwart the robbery, as her father would have done.  As the bandits make their getaway, the one who was recognized is shot down by the other.

As Ryan arrives in town, some of the town fathers have their misgivings about whether the sheriff is too old for the job.  Four cowboys from a local ranch (the Lazy Heart) ride in and proceed to shoot up the town.  The sheriff squares his shoulders and goes out to stop them without obvious help.  But Ryan tucks a gun in his belt and helps the sheriff stop them.  Since Ryan needs a job, the sheriff hires him as a deputy.  Meanwhile, the penniless Ryan inveigles a place at Mrs. Donahue’s upscale boarding house, where one of the other boarders is Velvet Clark (Mark Stevens), a gambler-miner, who (as is immediately obvious to the viewer) has the eyes above the bandanna in the stage robbery. 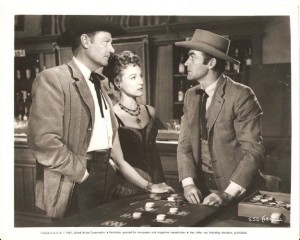 As Ryan starts about his duties, he observes Clark playing the piano in the parlor when Clark figures nobody is around.  Clark then proceeds to the saloon, where he loses.  He explains to his paramour, saloon girl Rosa (Darlene Fields), that he had the talent but not the funds to develop that talent; it appears that his turning to crime was because of the frustration.  Leaving for the Oriental across the street, he instead robs the bank, being careful not to be seen.  During the investigation of the robbery, Ryan displays his credentials as a Wells Fargo detective and steps in to support the sheriff.

The train is robbed by the four drunken cowboys from the ranch.  On his way to arrest them, the sheriff crosses paths with Clark and Clark shoots the sheriff rather brutally.  Ryan is also on their trail and finds the murdered sheriff.  Clark sees the robbery of the train and plans to take the $30,000 in proceeds from the drunken cowboy-robbers.  Meanwhile Ryan is following and gets a Mexican to show him a short cut by an old Indian trail over the mountains to their likely destination.  The townspeople there have captured the four cowboys, but Clark takes the loot, killing one of the captors.  He shoots Ryan’s horse as Ryan pursues, and Ryan has to get another. 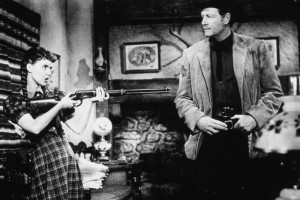 At a ranch house, Clark charms a farm girl into giving him a replacement horse.  Ryan still pursues, and catches up with Clark at Gunsight Ridge.  They shoot it out in the rocks, and Ryan wins.  He returns to Bancroft to Molly and to become sheriff as her father’s successor.

McCrea is good as always, and rides better than anybody else in the cast.  Stevens is excellent as Velvet Clark, and his character and performance are what make this movie better than average.  However, Stevens was a career second-tier actor in movies, and, except for McCrea, this is a low-wattage cast.  L.Q. Jones in an early role is one of the train-robbing cowboys.  In black and white, filmed in part at Old Tucson.