Now that we’ve thoroughly digested the earlier post on underrated westerns, here are fifteen more to check out.  If you have nominations for other westerns you think are underrated, leave a comment.

Robert Mitchum could be very good in westerns, and some of his earlier work (Blood on the Moon, Pursued, Track of the Cat, Man With the Gun) isn’t seen as much as it deserves.  This noir-influenced story of drifter Jim Garry switching sides in a range war has an excellent supporting cast, with Robert Preston (in his patented brother/friend-gone-bad role with a loud plaid jacket), Walter Brennan and Barbara Bel Geddes giving strong performances.  In addition to his strong performance in a good story, Mitchum has a great hat.  An early work from director Robert Wise, who didn’t make many westerns.  Not often seen because it hasn’t been available on DVD. 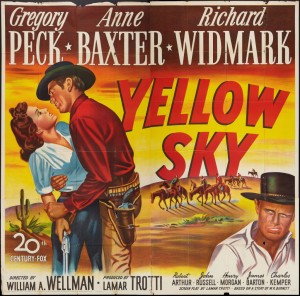 In another noir-western, Gregory Peck has a rare role as an outlaw.  James “Stretch” Dawson and his gang elude a posse by fleeing into the desert, only to face death from the elements and lack of water.  They stumble into the deserted mining town of Yellow Sky, inhabited only by an old miner and his granddaughter Mike (Anne Baxter).  Now they have to work out among themselves what they want, and different agendas start to emerge.  Dawson’s decency starts to show, but the gang members don’t want to go along.  A very strong supporting cast here, with Richard Widmark, John Russell and Harry Morgan, among others.  And an excellent director, William Wellman (The Ox-Bow Incident and Westward the Women). 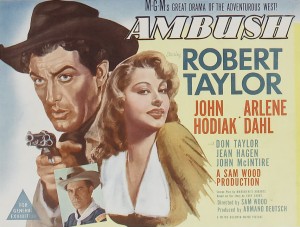 A good and seldom-seen cavalry movie, with old scout Ward Kinsman (Robert Taylor) working out a romantic triangle involving Arlene Dahl and by-the-book Captain John Hodiak and trying to stay alive while fighting Apaches.  Another triangle involves a lieutenant in love with an enlisted man’s wife.  Geronimo’s grandson Charles Stevens shows up as Apache leader Diablito.  Taylor is almost a fixture on the underrated westerns lists; here he heads a large cast fighting Apaches, coping with wrong-headed military commanders and grappling with illicit and misguided romances.  This was the last film from director Sam Wood.

Robert Taylor again, this time as blue-eyed Shoshone Indian veteran of the Civil War Lance Poole.  Poole is returning home to Wyoming Territory in director Anthony Mann’s first western.  All kinds of nasty social and racial currents develop, as a sleazy land speculator tries to take over the Poole ranch.  There’s a doomed interracial romantic relationship, and things escalate to major battles.  How will Poole be able to stay true to his people and emerge with his family’s ranch intact?  There are no easy ways out here.  This is not nearly as well known as Mann’s later psychological westerns, mostly with James Stewart, but it’s well worth watching.

A wagon train western by John Ford with less star power than most of Ford’s movies.  Here Ward Bond is Elder Wiggs, leader of a train of Mormons headed into rough country.  Guided by Ben Johnson and Harry Carey, Jr., they have to deal with the Cleggs, a nasty family of outlaws, the temptations provided by a hard-luck medicine show including saloon girl Joanne Dru, and hostile Navajos (including Jim Thorpe, in his last movie appearance).  This was one of Ford’s favorites among his own movies, but it’s one of those least seen today.  It gave rise a few years later to the television series Wagon Train, also starring Ward Bond. 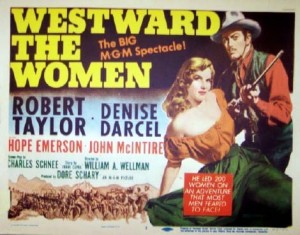 Another excellent wagon train movie, and another underrated Robert Taylor film.  Taylor here is Buck Wyatt, wagon master of a train of women recruited by John McIntire, headed from Independence, Missouri, to a valley in California.  They encounter the usual hardships, storms and Indians, although they are spared the depredations of outlaw gangs.  This may be Taylor’s best western.  He’s the dominant figure throughout the movie.  Director William Wellman was known for despising most actors he worked with, but he liked Robert Taylor.  The women included a few actresses (Denise Darcel, and six-feet-two-inch Hope Emerson) but were mostly stunt women.  It’s a remarkable achievement and a very watchable film, and it deserves more attention.

Robert Mitchum is Clint Tolliver, hired to tame the town of Sheridan while he also works out a few of his personal demons and battles the minions of local ranching baron Dade Holman.  Mitchum is very good at this kind of a role, and the town becomes progressively more uneasy with him and his methods, although he was very up-front about what it would take and how he would do it.  A young woman develops a fixation on him that he doesn’t want.  He’s a bit world-weary and has seen all this before.  Aside from Mitchum, this doesn’t have much star power, but it’s very good.  Look for a young and uncredited Angie Dickinson as one of Tolliver’s ex’s saloon girls. 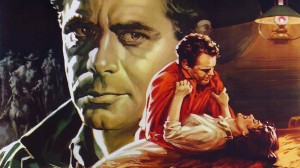 This is a range melodrama shot on location in Jackson Hole.  Melodramas are not as much in cinematic fashion now as they were in the 1940s and 1950s, and that may be one of the reasons this story with Shakespearean and Biblical overtones is not seen much.  It is referred to as an “adult western,” largely because of themes related to sexual behaviors and tension.  Glenn Ford is Jubal Troop, a hard-luck cowboy rescued by Ernest Borgnine’s rancher Shep Horgan.  Horgan eventually comes to believe that his faithless young wife Mae has developed a fascination with Troop, although Troop’s romantic interests lie elsewhere.  This is a nicely-paced and well-acted work from director Delmer Daves’ best period (3:10 to Yuma, Cowboy, The Last Wagon).  And it’s beautifully shot, if you’re watching a good print or transfer; check out the DVD from the Criterion Collection.

This, along with Yellow Sky and Purgatory, belongs to the category of western in which an outlaw gang is pursued into the desert by a posse and unpredictable things happen.  Here the gang is led by Heller (John Larch) and includes gunman-desert scout Gentry (Fred MacMurray), Heller’s girl Chaney (Dorothy Malone) and a couple of others as they seek refuge from the posse and hostile Indians in the ghost town of Quantez for one night.  They don’t have enough horses, and their separate agendas come into conflict.  Fred MacMurray made several westerns (At Gunpoint, Good Day for a Hanging, Face of a Fugitive, The Moonlighter) in the 1950s, and this might be the best of them.

Joel McCrea has a role here that fits well with his age and personality; he’s an aging sergeant in the cavalry fighting Apaches in Arizona.  After his troop captures a band of renegade Apaches with a long-term white woman captive, Hook is assigned to accompany the captive and her half-Indian son to a reunion with her reluctant husband (a situation similar to one portrayed a decade later in Duel at Diablo).  Meanwhile, the Apache leader (Rodolfo Acosta) escapes and tries to take his son back.  This cavalry western features fighting the Apaches, a strangers-on-a-stagecoach story and racist social currents.  In the end, Hook is up to all the challenges, but it isn’t easy. 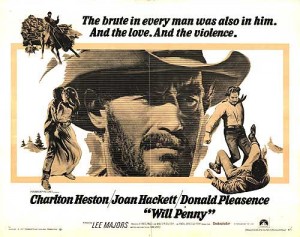 This end-of-an-era western features Charlton Heston’s strongest performance in a western.  Monte Walsh, with Lee Marvin and many similar themes, was released a couple of years later and is better known, but Will Penny is as good in its way as Monte Walsh.  They would make an excellent double feature. Aging cowboy Will Penny is thrown together with a younger widow (Joan Hackett) and her son for the winter, and they learn to tolerate each other and then something more.  As they battle the elements and some nasty rawhiders (Donald Pleasance, Bruce Dern), they form a relationship and the question becomes what will happen in the spring.  Heston, known for some of the biggest performances of the 1950s and 1960s, especially in historical epics, regarded this smaller kind of role as one of his favorites.  And Joan Hackett was great, too.

It’s not quite as good as Support Your Local Sheriff, but it features James Garner in the same kind of charming con man part that he did better than anybody else.  More than forty years later, it’s hard to imagine slavery as a subject for comedy, but this pre-Civil War western pulls it off, in large part because Garner is matched with Louis Gossett, Jr., and Susan Clark, who are also very good.  The plot wanders a bit, which we don’t really mind because we’re enjoying it so much.  It’s not perfect, but it’s fun.

This is a big-budget Civil War movie, directed by a big name—Ang Lee.  About the war on the Missouri-Kansas frontier, this movie humanizes the bushwhackers and emphasizes their different motivations and approaches to the war.  The second half of the film focuses on the friendship between a German immigrant’s son (Tobey Maguire) and an ex-slave (Jeffrey Wright) as they ride with the bushwhackers.  If you want to see all Confederates as evil slave owners, you should avoid this film.  It’s beautifully shot with big themes and no easy answers.  Many of those in the movie (Maguire, Wright, Jonathan Rhys Meyers, Jim Caviezel, Mark Ruffalo, Simon Baker) have gone on to become bigger names than they were when this was made.  This is one of the best six or seven Civil War movies ever made.  It’s not short, though; make sure to give it the time to develop. 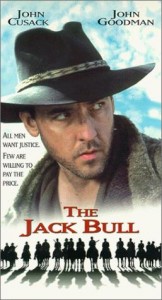 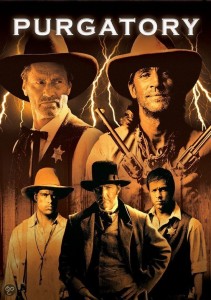 This hasn’t received the attention it deserves because (a) it was made for television (cable channel HBO), and (b) it tells a grim story of a relentless quest for justice complicated by tragedy and unintended consequences.  It’s John Cusack’s only appearance in a western so far, and he and John Goodman give excellent performances.  The screenplay is by Dick Cusack, John’s father, based on a German novel.  Cusack is Myrl Redding, whose horses and Indian ranch hand are mistreated by a larger landowner (L.Q. Jones).  His search for redress gets out of hand and turns the territory upside down.  Judge Joe B. Tolliver (Goodman) has to sort it out, but some things can’t be fixed.  The film has a wintry look suitable for the bleak story of statehood and unequal justice in Wyoming in the 1890s.  A little modern political correctness creeps in around the edges, but it’s not too bad or distracting.

In addition to being a story of an outlaw gang chased into a strange and mysterious place they don’t know, it also has a strong whiff of the supernatural about it.  Usually the supernatural doesn’t work well in westerns; here it’s integrated into the heart of the story.  The ruthless outlaws think they can take over a small town of peaceful citizens.  One of them gets to know the citizens and starts to change.  Finally the outlaws find out they have taken on [spoilers, sort of] Bill Hickok, Jesse James, Billy the Kid and Doc Holliday.  The premise sounds kind of stupid, but it works surprisingly well.  It has particularly good performances by Sam Shepard, Eric Roberts and Brad Rowe.  It was made for television (TNT) and shouldn’t work nearly as well as it does.  It’s not perfect or a big movie, but it is a well-written story (if you suspend disbelief and just go with it), and it’s well paced.