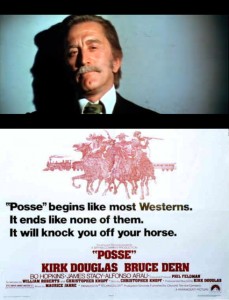 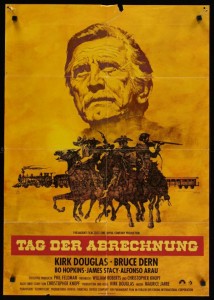 A 1970s revisionist western—anti-establishment, anti-authority, anti-military, anti-railroad, although more watchable than most such.  The message, when we get down to it, is that there is a very fine line between the outlaws and the men who hunt them—perhaps no line at all.

Howard Nightingale (Kirk Douglas) is a Texas marshal with political ambitions, leading five uniformed men as his regular posse.  At the movie’s start, they are in pursuit of Jack Strawhorn (Bruce Dern) and his gang.  They burn down the barn in which the gang is sleeping (also burning down $40,000 in loot in the process), but Strawhorn escapes.  He quickly recruits another gang as the posse closes in on him again.  In the ensuing battle, the others in the gang are killed and Strawhorn surrenders. 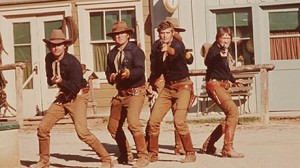 He is taken to the town of Tesoto, where Strawhorn earlier had killed the town sheriff who tried to arrest him.  With Strawhorn in custody, Nightingale takes the opportunity to give a campaign speech for his election as senator, and his men make free with the local women.  The local newspaper is run by Harold Hellman, missing his right arm and leg (James Stacy, who’d lost them two years earlier in a motorcycle accident), who doesn’t much like Nightingale.  Nightingale is self-serving and too cozy with the railroad but doesn’t seem overtly bad or unduly corrupt.

As they take Strawhorn away on their private train, he contrives to escape and, as they pursue, he takes the train and Nightingale as a prisoner and heads back to Tesoto.  With Nightingale as hostage he demands the posse pay $40,000 for Nightingale to remain alive.  They ruthlessly take all the money in the town, about $30,000.  Strawhorn hands it back to John Wesley (Bo Hopkins), head of the posse and invites them to mount up and join him.  All but one do, and they ride out of town as Strawhorn’s new gang.

One of Douglas’ last westerns, this cynical film should be compared with the anti-authoritarian There Was a Crooked Man from 1970, with greater ambitions, a bigger budget and bigger cast.  This is better, although very much a creation of the 1970s.  Douglas produced, starred and directed.  Dern is pretty good as Strawhorn.  The plot reversal at the end isn’t entirely believable, but it’s well done.  Shot in Old Tucson.  A movie with the same name was made by Mario Van Peebles in 1993 with a mostly ex-slave black posse.