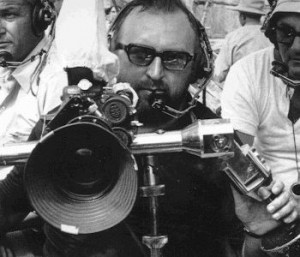 From The Good, the Bad and the Ugly:  Tuco (Eli Wallach) is in a bubble bath. The One Armed Man enters the room.
One Armed Man:  “I’ve been looking for you for eight months.  Whenever I should have had a gun in my right hand, I thought of you.  Now I find you in exactly the position that suits me.  I had lots of time to learn to shoot with my left.”
[Tuco kills him with the gun he has hidden in the foam.]
Tuco:  “When you have to shoot, shoot.  Don’t talk.”

“When I was young, I believed in three things:  Marxism, the redemptive power of cinema, and dynamite.  Now I just believe in dynamite.”—Sergio Leone

Sergio Leone was born in Rome in 1929 into a cinematic family.  His parents were the cinema pioneer Vincenzo Leone (known as director Roberto Roberti or Leone Roberto Roberti) and the silent film actress Edvige Valcarenghi (Bice Waleran).  During his school days, one of his friends was Ennio Morricone, his future musical collaborator on films.  Leone’s parents did not sympathize with the Fascists in power in Italy before and during World War II, and they were effectively exiled to Naples until the war was over.

Working in cinematography, Leone began as an assistant to director Vittorio di Sica on the classic The Bicycle Thief in 1948.  During the 1950s he started writing on screenplays for the historical “sword and sandal” epics popular at the time, including work on some large-scale films at the famous Cinecittá studios in Rome, such as Quo Vadis (1951) and Ben-Hur (1959).  His big break came in 1959, when director Mario Bonnard fell ill during the filming of The Last Days of Pompeii, with Steve Reeves, and Leone was asked to step in and complete the film.

When historical epics fell out of favor with the public, Leone turned his attention to inexpensive westerns, with largely Italian casts, filmed mostly in Spain—the so-called spaghetti westerns.  He first brought them to international prominence in 1964 with the release of A Fistful of Dollars, starring American television actor Clint Eastwood and based on Akira Kurosawa’s samurai film Yojimbo.  It wasn’t the first spaghetti western, but it was far and away the most successful to date.  With progressively larger budgets, it was followed by For a Few Dollars More, with Eastwood and Lee Van Cleef in 1965, and The Good, the Bad and the Ugly, with Eastwood, Van Cleef and Eli Wallach in 1966, completing what came to be referred to as his “Man With No Name” trilogy.  There is no continuity of story or character between the three, and sometimes the Eastwood character actually does have a name. 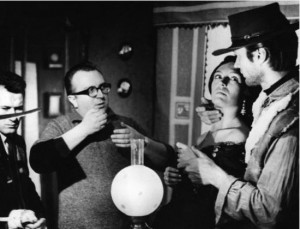 Directing the Man With No Name.

By the conclusion of the trilogy, Leone had started a revolution.  He had developed an international market for inexpensively-made Italian westerns and had introduced a vogue for them that lasted a decade.  He had made Clint Eastwood a major star, and created another in Lee Van Cleef.  He had introduced a different kind of moral universe in westerns, one less aligned with easily-identifiable good guys and bad guys but with even more violence.  There are those who would say he introduced sweat and dust to westerns, but those had long been there (see Hondo, for example)—just not so prominently and consistently, nor so lovingly captured on film.  He prolonged the careers of such actors as Jack Palance and Henry Fonda, who found prominent roles in spaghetti westerns when such roles became scarcer for them in Hollywood.  And he was godfather to an entire generation of Italian filmmakers, often while simultaneously fighting with them:  Bernardo Bertolucci, Dario Argento, Tonino Valerii, Sergio Corbucci and many others.

In terms of cinematic style, Leone was revolutionary as well.  The music for his films, composed by his friend Morricone, brought a new way of thinking about music in films, and not just in westerns, much different from more traditional studio composers like Elmer Bernstein and Dimitri Tiomkin.  Morricone said that Leone asked him to compose a film’s music before the start of principal photography, contrary to the normal practice.  He would then play the music to the actors during takes to enhance their performances.  His film-making style was noted for juxtaposing extreme close-ups (often focusing on the eyes, especially if they were blue), with extreme long shots.  He was always willing to sacrifice story for effect or mood.  His work has been much imitated since. 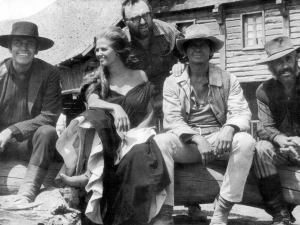 Once Upon a Time ,,, Leone with stars Fonda, Cardinale, Bronson and Robards.

Leone’s success with the Man With No Name films enabled him to make what many consider his masterpiece:  Once Upon a Time in the West (C’Era una Volta il West), released in 1968.  The film, starring Charles Bronson, Henry Fonda, Jason Robards and Claudia Cardinale, was shot mostly in Almería, Spain, and Cinecittá in Rome, with some shooting in Monument Valley, Utah.  A bigger budget gave Leone the scope for a long meditation on the mythology of the American west, with many references to previous iconic westerns and with Leone giving his cinematic impulses free rein.  The resulting three-hour epic was ruthlessly edited by Paramount and was not a box office success in the U.S., though the full movie was a huge hit in Europe, especially in France.

During the 1970s, Leone went on to direct Duck, You Sucker!, set in the Mexican revolution, although he had intended only to produce it, and he produced the spaghetti western comedy, My Name is Nobody.  He turned down an opportunity to direct The Godfather to focus on his own gangster pet project, a four-hour gangster movie titled Once Upon a Time in America, with Robert De Niro (1984).  Warner Bros. recut it drastically to two hours for the American market, where it was a flop.  It was his last significant work.  When the four-hour film was restored and made available, some hailed it as a masterpiece as well.  Leone died in 1989 of a heart attack at the age of 60. 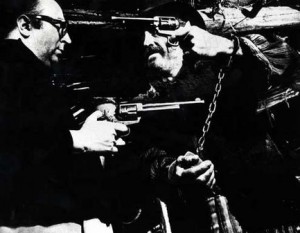 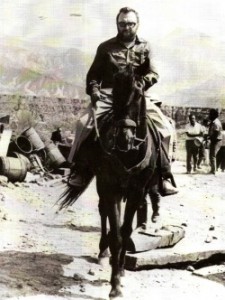 Experimenting with the tools of the trade:  Playing guns with Jason Robards, and using the basic form of transportation.

“Ever since I was a small boy I’ve seen a lot of Hollywood Westerns where, if you cut the woman’s role out of the film in a version which is going on in your own head, the film becomes far better.”–Sergio Leone.  That explains a lot about the Man With No Name trilogy.

“The [John] Ford film I like most of all…is also the least sentimental, The Man Who Shot Liberty Valance…  Ford finally, at the age of almost sixty-five, finally understood what pessimism is all about.  In fact, with that film Ford succeeded in eating up all his previous words about the West… because Liberty Valance shows the conflict between political forces and the single, solitary hero of the West…  He loved the West and with that film at last he understood it.”—Sergio Leone, in a very European view.

“I can’t see America any other way than with a European’s eyes.  It fascinates me and terrifies me at the same time.”—Sergio Leone 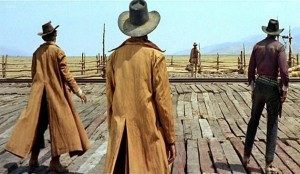 The opening scene from Once Upon a Time in the West:  Waiting for the stranger.

Leone Essentials:  A Fistful of Dollars, For a Few Dollars More, The Good, the Bad and the Ugly, Once Upon a Time in the West

Leone Non-Western Essentials:  Once Upon a Time in America