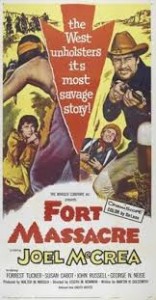 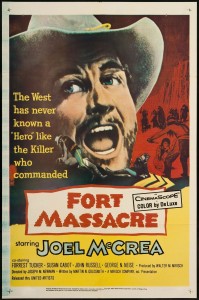 This is a grim psychological cavalry western, with Joel McCrea as Sgt. Vinson of Company C in southwest New Mexico in 1879, a variant of the “lost patrol” story.

At the start of the film, the captain and lieutenant of Company C have been killed by Apaches, and the decimated company is trying to get back to Fort Crane under the leadership of Sgt. Vinson.  Forrest Tucker is Pvt. McGurney, a particularly malcontent Irishman; Anthony Caruso is Pawnee, the patrol’s sardonic Indian scout.  Vinson is experienced but influenced by the death of his wife and son at the hands of Indians.  His men gripe and seem on the point of mutiny the entire film, but he forges ahead, attacking the Apaches twice with the resulting reduction in his own numbers.

Only Pvt. Travis (John Russell) becomes something of a reluctant confidant for the embattled sergeant.  “Fort Massacre” is the name given by the men to the cliff dwelling where they take refuge, only to have a war party of Apaches show up.  In the end, Vinson is shot by the last of his own men, Pvt. Travis, when Vinson tries to shoot a couple of non-hostile Paiutes at the cliff dwelling. 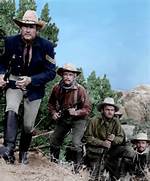 In some ways this can be compared with They Came to Cordura, released about the same time.  It’s a cavalry movie with a revisionist view of the cavalry.  Joel McCrea being who he was, we keep waiting for him to reveal his good side, but it’s apparently not there in this movie.  In some ways, McCrea toward the end of his career seemed to be looking for roles that were more varied than he had tended to play for the previous decade.

The movie is short at around 80 minutes; in color.  Filmed at three locations:  Gallup in New Mexico, Red Rock State Park, New Mexico, and Kanab, Utah.

For a couple of other variants of the mutinous patrol story from the late 1950s, see 7th Cavalry with Randolph Scott (1956) and They Came to Cordura with Gary Cooper (1959).