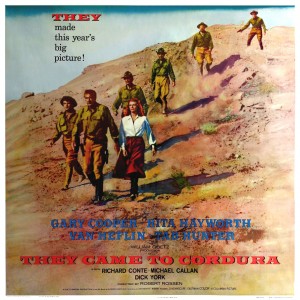 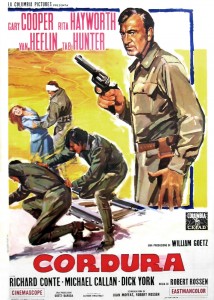 Gary Cooper is a little old (again) in his last western and one of his last roles of any kind, as Major Thomas Thorn, the Awards Officer of the 1916 Pershing expedition into northern Mexico against Pancho Villa after Villa’s raid on Columbus, New Mexico.  Thorn had been at Columbus, and his conduct there he (and others) viewed as cowardly.  So a coward is in charge of selecting and writing up the heroes of the expeditionary force into Mexico.

After Thorn’s first hero is killed in subsequent action, he obtains permission from Pershing to take any others he may select with him back to forward headquarters base at Cordura.  As Thorn observes a successful cavalry charge on a rancho at Ojos Azules (“blue eyes”) owned by Adelaide Geary (Rita Hayworth), the alcoholic daughter of a disgraced (and now deceased) former U.S. senator, he selects four or five soldiers for their conspicuous heroism during the charge (historically, the last cavalry charge made by the U.S. army).  But the movie is about role reversal and the transitory nature of both cowardice and heroism.

The group of awardees is comprised of Lt. Fowler (Tab Hunter), Sgt. Chawk (Van Heflin), Pvt. Hetherington (Michael Callan), Cpl. Trubee (Richard Conte), and Pvt. Renziehausen (Dick York).  As the six soldiers, now including Miss Geary in their group, move toward Cordura, they are attacked by the remnants of the Villa forces from Ojos Azules and lose their horses.  Under the stress of trying to make it across the Chihuahua desert, the potential awardees all show themselves to be despicable, mutinous and/or weak in various ways, while it is Thorn’s iron will supported only by Adelaide (who knows that she will be imprisoned for aiding the enemy once she is in army custody) that keeps them going.  Thorn asks them individually what led to their heroism in battle, and they don’t know.  They simply did it.  But whatever courage they briefly showed in battle, they don’t seem to have courage with stamina for the longer haul—for the desperate trip to Cordura, once they lose their horses.  The coward Thorn does have that kind of courage.

In the end he is successful at getting them through despite themselves and presumably submits the miscreants for their original awards as he wrote them up.  But the exact ending is a bit unclear.  The movie, based on a novel by Glendon Swarthout (who also wrote the novel “The Shootist”), is not as good as the novel, which was a best-seller in its time.  Neither the film nor the novel is much seen these days.  Rita Hayworth isn’t bad, but Gary Cooper is miscast; he’s a little long in the tooth at 58 to be playing an army officer in the field.  Tab Hunter is wooden.  Van Heflin, known for being stalwart in Shane and 3:10 to Yuma, is excellent here as the angry and mutinous Sgt. Chawk.   The benediction on all this is pronounced by Adelaide Geary:  “One act of cowardice doesn’t make a man a coward forever, just as one act of bravery doesn’t make a man a hero forever.” 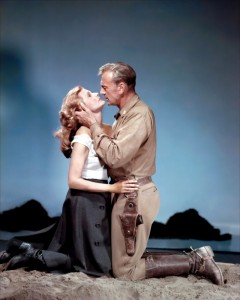 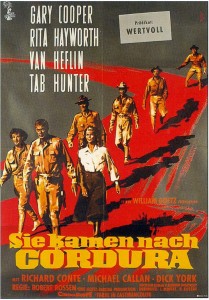 Reportedly the film was taken out of director Rossen’s hands by the studio, which cut and re-cut it.  Rossen’s original, about half an hour longer, was said to be a significantly better film.  Even so, the shorter version is more than two hours long.  It’s hard to escape the feeling that it should have been better.  One viewer’s comment:  “There are definite moments of insight and interest in the film, but it tends to wear down the viewer with its nearly relentless cynicism and unpleasantness.”  Even so, it isn’t as downbeat as it could have been.  The studio insisted, for example, that Cooper’s character couldn’t die in the end.  Hayworth is good in this, receiving some of the best reviews in her career for her acting here.  The film was a flop at the box office, though.  This is in need of restoration to a director’s cut.  In color, filmed on location in Mexico, Las Vegas and St. George, Utah.

For other films about the same period, see Bandido, The Professionals, The Old Gringo and various movies about Pancho Villa.  Maybe The Wild Bunch.  The Mexican revolutions in the 1910s seemed to breed cynicism.  Toward the end of her career, Rita Hayworth was in two westerns, both of them set in 20th century Mexico or central America:  this, and The Wrath of God (1972), her last film.