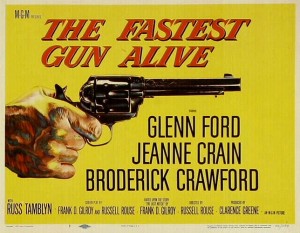 Heavy-set Broderick Crawford as a quick-draw bad guy named Vinnie?  A psychological western with lots of angst, kind of 1950s Freudian.  It is also a variation on the theme of how somebody quick with a gun draws others who want to test themselves against him (e.g., The Gunfighter).

Storekeeper George Kelby/Temple (Glenn Ford) has father issues with his now-deceased lawman father, who was good with a gun until he was killed.  Bad guy Vinnie’s insecurities are fueled by having been abandoned by his wife.  Kelby/Temple is great with a gun and occasionally needs to show off his skills, but he has never shot a person and is afraid to do so.  Vinnie, having robbed the bank in a neighboring town with his gang (John Dehner, Noah Beery, Jr.), is making his escape when he hears about Kelby’s skill.  Fancying himself to be fast with a gun, Vinnie tries to force Kelby into a test showdown, or he’ll burn down the town. 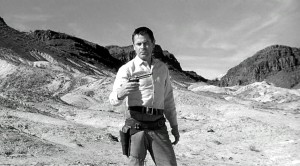 Kelby/Temple (Glenn Ford), wondering if he can do it.

There is much anguish as Kelby and other townsfolk take refuge in the church and debate whether he has to take up Vinnie’s challenge and save the town.  His wife (Jeanne Crain) doesn’t want him to do it.  One townsman (Leif Erickson) reluctantly volunteers to impersonate George to save the town.  Finally Kelby steps up, as we knew he eventually would have to.  But he doesn’t like it.  “Don’t say a word, Lou…because a word is about all it would take.”  George walks out into the dusty street ….

Cut to the posse pursuing Vinnie et al., finally arriving in town.  They find only graves in the churchyard, including one for Vinnie and one for George Temple.  He has been buried with his gun.  Only the living storekeeper George Kelby remains. 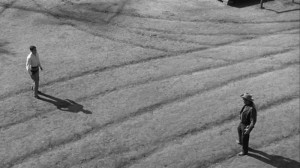 Theoretically, all of the anguish is resolved at the end of the movie, but it seems like the need to demonstrate his skills will come back, even though his father’s gun is now buried and gone with Vinnie.  This has a good supporting cast, including Noah Beery, Jr. and John Dehner as the other two members of Vinnie’s gang.  There are a lot of 1950’s “gunman and the community” issues, with a lot of ambivalence among townsmen about how to deal with Vinnie, the role they want Kelby/Temple to play, and how they feel about him.  In black and white, at 89 minutes.

Glenn Ford was at the peak of his career in westerns, although he always played roles other than westerns, too (Teahouse of the August Moon, Don’t Go Near the Water).  This was about the time that he made 3:10 to Yuma, Jubal and Cowboy with director Delmer Daves and The Sheepman.  For a similar theme with Fred MacMurray, see At Gunpoint.