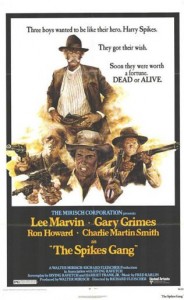 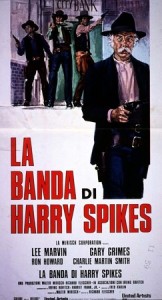 Both a coming-of-age and a coming-of-death movie (perhaps similar to The Shootist in that regard, also with Ron Howard).  Lee Marvin is Harry Spikes, outlaw mentor to young friends Wil (Gary Grimes), Les (Ron Howard) and Tod (Charlie Martin Smith).  After helping the wounded Spikes when they first encounter him, the young men have left home and bungled a bank robbery when they cross paths with Spikes again.  He apparently takes a liking to them.  They need considerable mentoring in simple survival out in the world, and Spikes leads them into a course in advanced bank robbery as well.

In the end, they all die in a burst of 1970s iconoclasm, with Wil and Spikes killing each other in a shootout after Spikes turns bounty hunter and betrays the youngsters.  Marvin is effective as always (with a really good turn-of-the-century mustache), and the three young men are good as well.  There’s some good writing, but ultimately there’s also some slow pacing and a lot of nihilism here. 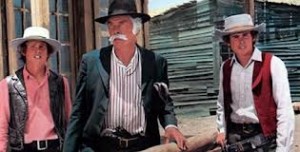 Available on DVD as of 2011.  As with other movies from the early 1970s, the blood looks a lot like paint.  There’s some good writing in the dialogue, although the plot is a downer (kind of like The Culpepper Cattle Co. from the same era, also starring Grimes, who, for a brief period in the early 1970s specialized in coming-of-age movies).  There a tone of unspoken regret, perhaps repentance, in the end.  The film is obviously influenced by The Wild Bunch and Bonnie and Clyde of a few years earlier.  Arthur Hunnicutt, in his last film, and Noah Beery, Jr., are good in brief roles.  Shot in Spain.