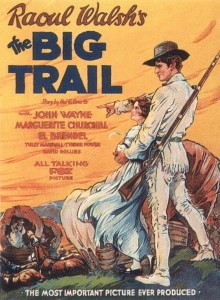 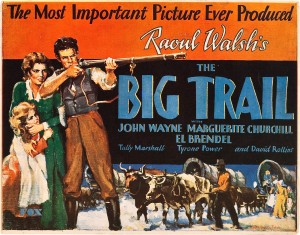 This early talkie is interesting for two innovations:  (1) 20th Century Fox was introducing its new proprietary “Grandeur” 70 mm widescreen picture format, more than twenty years before such widescreen images became common in movies, and (2) director Raoul Walsh selected for the lead a young man (23) who would become the most enduring star in westerns of the 20th century—John Wayne.  Unfortunately the new widescreen format required extensive retooling of theatrical exhibition equipment and projection rooms, and in the depths of the Great Depression of the 1930s, few exhibitors had the funds to make those changes.  John Wayne would have to wait almost a decade for stardom, and widescreen formats would have to wait another twenty years.

John Wayne was a tall, good-looking former USC football player who had first gotten into movies during the 1920s by working as a prop man.  John Ford and others used him as an extra and in bit parts, but it was Raoul Walsh who first gave him a leading role here, as Breck Coleman, the scout for a wagon train headed west from Missouri.  Coleman is looking for the murderers who had killed his best friend, a trapper, and stolen his wolf pelts.  He decides to go along with the wagon train when he sees clues that the murderers might be with the train and when he is attracted to Ruth Cameron (Marguerite Churchill), a young woman heading west with her brother and sister.  Red Flack, the rough wagon master (Tyrone Power Sr.), is not fond of Coleman, but there is nothing he can do.  Gambler/gunman Bill Thorpe (Ian Keith) also joins the train to avoid being hung and because he too wants Ruth. 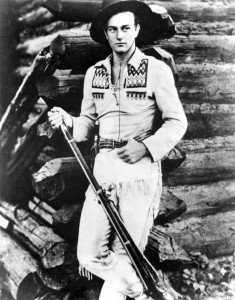 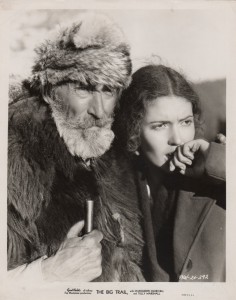 As they head west across the plains, Coleman becomes more certain that Flack and his henchman Lopez (Charles Stevens) are his friend’s murderers, and Thorpe joins forces with them.  While Coleman is off hunting buffalo with a couple of Indian scouts, Thorpe ambushes him and sees him fall.  Thorpe, Flack and Lopez are surprised when he makes it back to camp with only a bullet hole in his saddle and no horse.

The wagon train encounters the usual difficulties:  hostile Indians, tough river crossings, steep canyon walls, heavy rains and other forms of rough country.  Thorpe persuades Ruth Cameron to leave the wagon train and head for California with him.  As Coleman goes off to visit a friend, he is followed by Thorpe.  When Thorpe draws his pistols to shoot Coleman in the back, he is instead shot by Coleman’s friend Zeke (Tully Marshall).  For a moment, the entire camp, including Ruth, believe that Coleman is a murderer, until Zeke comes to his defense.  Now the Cameron wagon has to stay with the main train. 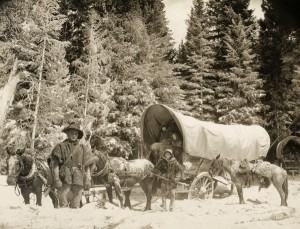 In snowy mountains, many are tempted to turn back until Coleman gives an impassioned speech, renewing their heart to forge on.  Flack and Lopez abandon the wagon train, but Coleman sees the train through to their destination in “the country beyond Oregon” (the tall trees look more like northern California).  Ruth has finally decided she loves Coleman and begs him to stay with them.  But he goes in search of Flack and Lopez, this time with a speech about how a man must make his own justice out west.  By the time he finds them, Lopez has frozen to death, and Coleman gets the nefarious Flack just as Flack is trying to shoot him.

As spring arrives in the pioneer valley, Ruth has decided that Coleman did not survive his dangerous mission of revenge or justice.  But she encounters him in the tall trees, and their love is renewed.  Fade to black, with symphonic music. 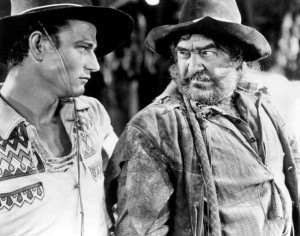 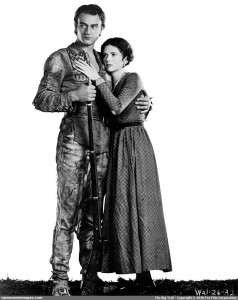 The visuals are the best part of this movie, shot by cinematographer Arthur Edeson.  It was conceived as an epic when it was made, at the then-huge cost of $2 million.  It had a large cast and was shot on location in Montana, Wyoming, Utah and northern California, and the great natural beauty of the western vistas shows up on the wide screen with a lot of depth.  It was made in the early days of sound movies, and the recording equipment was still pretty primitive, especially when used outdoors, where almost all of this movie was shot.  Since theaters that could show the film in 70 mm were rare (at the time of its release, only Grauman’s Chinese Theatre in Los Angeles and the Roxy in New York City had the equipment for a film shot in the Fox Grandeur process), the film was simultaneously shot in the usual 35 mm format.  (Actually, five versions were shot on location, with French, German and Spanish language versions, mostly with different casts, accounting for the other three.)

If you’re going to watch it now, see the restored version, at 122 minutes.  “A financial disaster, the widescreen Big Trail vanished for 60 years, until the Museum of Modern Art restored it in the 1980s in a widescreen 35-millimeter print.”  A two-disc DVD set was released in 2008.  Some say the original cut was 156 minutes long, but if so, that longer version doesn’t seem to be available.  In 2006, the National Film Preservation Board included The Big Trail in the National Film Registry.

According to Dave Kehr, “Walsh makes maximum use of the width of the big screen, composing his shots so that the eye is led, as in classical painting, to pick out a series of details across the surface of the image.  But he also uses the extremely high resolution of the 70-millimeter stock to create perspectives that draw the viewer from foreground details to action in the distant background, at times seemingly miles away. Nothing less is at stake here than the whole system of analytical editing within a scene, as developed by the directors of the 1910s; what Walsh is doing does not really find an equivalent until Jacques Tati’s 70-millimeter masterpiece of 1967, Playtime.”

The unknown John Wayne (the studio came up with that name for young Marion Morrison for this film, taking the last name from Revolutionary-era General “Mad Anthony” Wayne) does well and holds the screen.  He is occasionally given stilted speeches and does the best he can with them, but he’s not yet the actor he will become.  If the movie had been more successful, this might have been his big breakthrough.  But it wasn’t, and he had to wait almost a decade for larger success to come in 1939’s Stagecoach.  He spent the intervening years making eight-day and ten-day B movie westerns, in an era when almost all westerns were cheaply and quickly turned out, and there was no cinematic prestige attached to them. 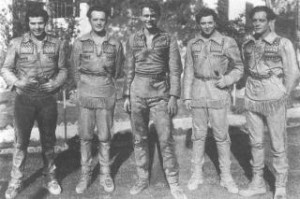 Some of the other actors in the film, such as romantic interest Marguerite Churchill and Tyrone Power Sr. (playing the large and rough villain Red Flack with a growly voice), had stage backgrounds, and their acting is a bit broad for modern tastes.  They had to project so their voices could be caught by the relatively primitive microphones.  One of the trio of villains (Lopez) is played by Charles Stevens, a grandson of Geronimo, who played a number of Indian and Mexican characters (he had both Apache and Mexican ancestry) from the 1930s through the 1950s, in such films as Frontier Marshal and My Darling Clementine.  El Brendel, the pseudo-Swedish “comedian” who plays the comic-relief immigrant Gussie, was actually Philadelphia-born Elmer Goodfellow Brendle, who had affected a phony German accent until the sinking of the Lusitania.  Ward Bond (later the star of John Ford’s Wagon Master and TV’s Wagon Train series) was assigned by Walsh to manage the wagons, appropriately enough.  Marguerite Churchill, the pretty heroine, wound up marrying George O’Brien, John Ford’s favorite leading man from 1924 to 1931.

This movie, along with silent films The Covered Wagon (1923, directed by James Cruze) and The Iron Horse (1924, by director John Ford), constitute the great epics of western American expansion from the early decades of the movies.  While the writing is clunky by current standards and the glories of Manifest Destiny don’t play as well to modern ears as they did to the audiences of the 1930s, this is paced well and has spectacular visuals.  It’s fun to watch. 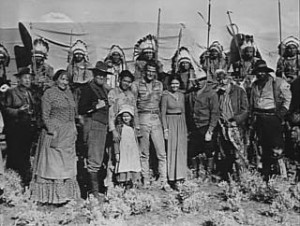 If you watch Stagecoach soon after seeing The Big Trail, you’ll notice several improvements.  One is that Stagecoach has noticeably better writing.  Another is that in the intervening decade, sound equipment had improved dramatically in quality.  And a third is that, by laboring in 40 or so B movies in the interim and taking advice from such veterans as Harry Carey, John Wayne’s acting skills were also a lot stronger.  When his big break came again in 1939, he was a somewhat more mature 32, and he made the most of it. 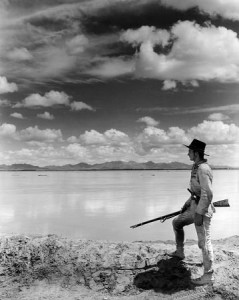 Breck Coleman, scout, to the dispirited pioneers weary of trekking through the snows of the high mountains:  “We can’t turn back!  We’re blazing a trail that started in England.  Not even the storms of the sea could turn back the first settlers.  And they carried on further.  They blazed it on through the wilderness of Kentucky.  Famine, hunger, not even massacres could stop them.  And now we picked up the trail again.  And nothing can stop us!  Not even the snows of winter, nor the peaks of the highest mountain.  We’re building a nation and we got to suffer!  No great trail was ever built without hardship.  And you got to fight!  That’s right.  And when you stop fighting, that’s death.  What are you going to do, lay down and die?  Not in a thousand years!  You’re going on with me!”