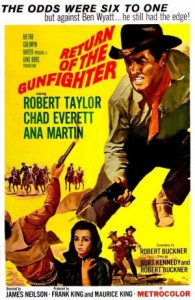 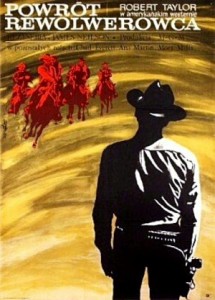 Aging gunfighter Ben Wyatt (played by aging Robert Taylor in his typical black, in one of his last movie roles) is released from the Arizona territorial prison at Yuma in 1878 after five years when it is discovered he was falsely convicted and imprisoned.  On his way to Lordsburg, New Mexico, he discovers (a) wounded Lee Sutton (Chad Everett) being chased by a Lordsburg posse after having killed a man named Boone; (b) his old friends the Domingos from days as a Juarista have been killed; and (c) three Boone brothers are also on the trail of Sutton.  (One of the Boones is played by Australian actor Michael Pate, who often convincingly played Indians in movies and television productions—Major Dundee, Hondo.)

After retrieving the Domingo daughter Anisa (Ana Martin) from Cipar, Wyatt, Sutton and Anisa head for Lordsburg to find out who killed her parents.  Turns out it was Lee’s older brother Clay Sutton (Lyle Bettger), who displays his unsuitability by cold-bloodedly shooting down the corrupt town judge and marshal (Mort Mills), who are both in his pocket.  Lee must choose between Wyatt (who has saved him) and Anisa on one side, or his brother.  There is a final shootout in Lordsburg, and it turns out predictably.  Taylor isn’t bad, but he looks tired, which is appropriate enough for this role.  In fact, Taylor was gravely ill during the shooting of this film.  The ending should have provided some form of resolution in the life of Ben Wyatt, and it doesn’t.  The action should have more of an impact than it does.  Everett isn’t great.  There are a couple of holes in the plot.  On the whole, this isn’t bad, though.  Not much seen these days.  Burt Kennedy is listed as one of the writers, with Robert Buckner.  He was also starting to direct westerns about this time (Mail Order Bride, Young Billy Young), with his masterpiece (Support Your Local Sheriff) coming in two years. 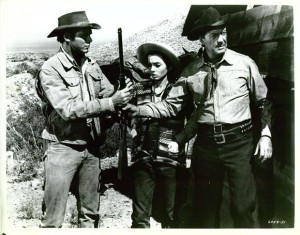 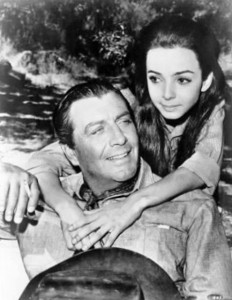 Taylor would be dead in two years, at the age of 57; this was his last western.  For another western in which Robert Taylor plays a character named Wyatt, see him as Buck Wyatt in Westward the Women (1951).  Chad Everett was a young, up-and-coming actor and appeared in a couple of westerns about this time before turning more completely to television (Medical Center).  The other is The Last Challenge, with Glenn Ford (1967).

Notes:  The nefarious Clay Sutton has a couple of gunslingers working for him named Sundance (the snaky John Davis Chandler in a strange hat, also seen in a bit part as a bounty hunter in The Outlaw Josey Wales) and Butch Cassidy, both bad guys.  The two historical outlaws did spend some time on New Mexico ranches, but not like this.  This movie was released a couple of years before the George Roy Hill movie came out, making the outlaw pair into sympathetic good guys.  Ostensibly the action takes place in 1878, but Lordsburg wasn’t founded until 1880.  And the historical Butch and Sundance weren’t around until the 1890s.