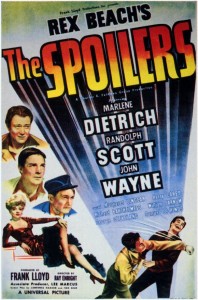 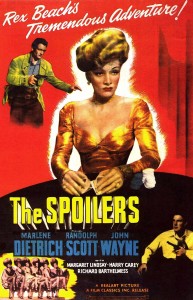 In the early 1940s, Randolph Scott had been the hero in a couple of better-than-average westerns (Last of the Mohicans, Frontier Marshal) and had persuasively played an unusually ethical villain in a couple more upscale westerns (Western Union, Virginia City), in which his character does not survive.  Here he is called upon to play a charming but unambiguously bad guy for a change.  His good-guy counterpart is rising star John Wayne, three years after his star-making turn in Stagecoach.  The balance between these two attractive actors makes this story work.

This was not the first (or the last) cinematic version of Rex Beach’s story of claim jumping in Nome, Alaska, in 1900, but it is probably the best.  Not only are the two main roles well-cast, but they are ably supported by Marlene Dietrich and Harry Carey. 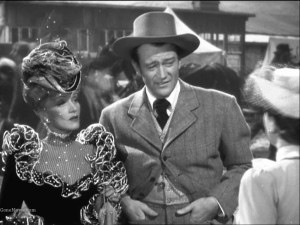 Roy Glennister (John Wayne) and his mining partner Al Dextry (Harry Carey) are the proprietors of the wealthy Midas gold mine, and things are going well when new mining commissioner Alexander McNamara (Randolph Scott) shows up.  Glennister has a regular relationship with Cherry Malotte (Marlene Dietrich), owner of The Northern saloon, and he’s returning from a trip to Seattle.  When he does, he’s in the company of the attractive Helen Chester (Margaret Lindsay), niece of the new federal judge Horace Stillman (Samuel S. Hinds).  He’s more attentive to Helen than he needs to be, and Cherry is offended.  Meanwhile, questions on the legitimacy of the Glennister-Dextry ownership of the Midas have been raised, and Dextry wants to respond directly with guns.  Glennister urges trying the legal way first.

What it gets them is having their mine and gold impounded, with several months before their case is heard, in which much more gold can be taken out by the authorities, McNamara and Stillman.  As Glennister and Dextry try to get their gold back, the local marshal is killed by Cherry’s manager-dealer Bronco Kid Farrow (played by silent star Richard Barthelmess in one of his last roles).  As tensions build between Glennister and Cherry, Bronco figures the blame for the marshal’s death will attach to Glennister, giving Bronco a better chance with Cherry.  It works to a point, and Glennister is jailed. 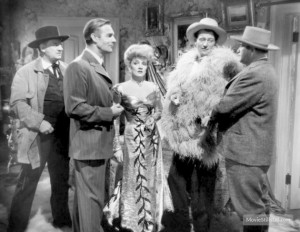 Glennister (John Wayne), while wearing feathers, gets arrested by the bad guys.

McNamara hatches a plan for Glennister to be killed in an escape attempt, but Cherry gets wind of it and aids a real escape.  Glennister and Dextry take back the Midas, but Bronco is mortally wounded in a train crash during the attack.  As he dies, he admits he killed the marshal.  Cherry has been distracting McNamara while the Midas was retaken, and now Glennister shows up at the Northern to save her from McNamara’s attentions.  This leads to an epic fight, in which much of the Northern is wrecked.  In the end, McNamara, Stillman and supposed niece Helen are apprehended before they can get away.  The Midas is in the hands of its real owners again, and Glennister and Cherry are back together.

The fight between John Wayne and Randolph Scott is one of the most storied in the history of westerns.  This sequence took about five days to lay out and film.  It’s unusually vigorous and well-staged, but not perfect.  For example, at one point a stand-in for Scott is a little too obvious, and there are a couple of spots in which it looks like the film was speeded up.  Still, in most of the key roles, the actors are a step up from the 1955 remake, for example.  John Wayne is a better actor than Jeff Chandler, Randolph Scott is more charming than Rory Calhoun, and Marlene Dietrich did this kind of role better than anyone else (although Anne Baxter was also excellent in 1955), even if her wigs are a bit extravagant.  And Harry Carey is more restrained but watchable than John McIntire.  The movie is tightly-paced and works well. 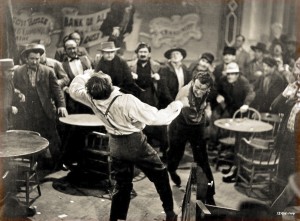 Randolph Scott and John Wayne wreck the Northern during an epic cinematic battle.

Barthelmess is an interesting side note in one of his last movie roles, as is William Farnum, who plays the Glennister-Dextry lawyer Wheaton.  He was the brother of early silent star Dustin Farnum (The Squaw Man, credited with being the first feature-length movie), and he had played Glennister himself in the 1914 movie version of the story–probably the first of five movies to use Beach’s 1906 novel as its basis. And there’s a brief vignette where Cherry encounters the poet Robert W. Service, writing about the shooting of Dan McGrew in The Northern. 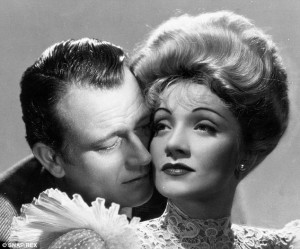 John Wayne and Marlene Dietrich were having an affair at the time this movie was made.

Note that Wayne got third billing on the posters, after Dietrich and Scott.  That would not long be the case.  Wayne and Dietrich have good chemistry in their relationship, perhaps because it mirrored their three-year affair in real life.  This was also Wayne’s first opportunity to appear in a film with Harry Carey, who had long been a mentor.  They would work together again in Red River and Angel and the Badman.