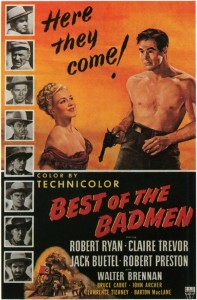 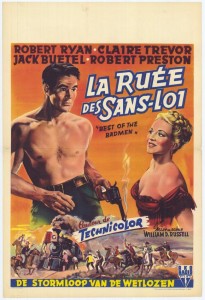 The late 1940s and early 1950s had a lot of titles with some version of the word “badman” in them. This has a good cast, but a muddled story.  Robert Ryan is Jeff Clanton, a native-Missourian major in the Union army as the Civil War is ending.  He ends up capturing and administering the oath of allegiance to the remains of Quantrill’s band, including various Youngers and Jameses, before he himself is mustered out.  A detective agency owner, Matthew Fowler (Robert Preston at his most weaselly, a pseudo-Pinkerton), objects and gets a mob together.  Clanton shoots one of Fowler’s men as the mob threatens the now-disarmed Confederates, and they take off.

Clanton is convicted of murder by a kangaroo court but is sprung before his scheduled hanging by Lily (Claire Trevor), Fowler’s estranged wife.  After a lengthy escape he is reunited with the Confederates in Quinto, Indian Territory, and he leads them on raids against Fowler-protected banks and trains.  Lily also shows up in Quinto, and Curley Ringo finds out her identity. 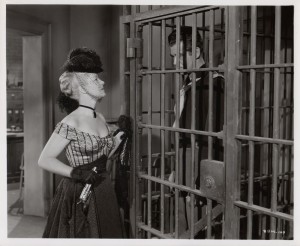 Cole Younger (Bruce Cabot), rather than Jesse James (Lawrence Tierney), seems the dominant personality in the group; gradually they become more violent than Clanton is comfortable with.  He determines that a final train robbery will be his last; Lily is shot during it, and he, Bob Younger (Jack Beutel, notable mostly for his role ten years earlier as Billy the Kid in The Outlaw) and Doc Butcher (Walter Brennan) make their escape from Quinto.

However, Lily is captured by Fowler’s men and is used as bait to trap Clanton.  Clanton engineers a raid on Fowler’s headquarters during which Fowler is shot by one of his own men.  Lily and Clanton presumably live happily ever after.  It is never clear why Lily and Fowler are so much at odds, why she would spring Clanton in the first place and why the otherwise upright Clanton can so easily make off with another man’s wife.  Ryan is good, as always; Claire Trevor isn’t given much to work with.  Walter Brennan is the best character in the film. 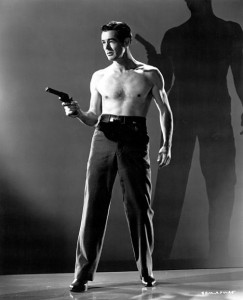 Still of Robert Ryan as Clanton.

In color.  The supposed Missouri and Oklahoma locations look a lot like southern California and southern Utah.  Not long at less than 90 minutes.  From some reason, the posters seem to emphasize a shirtless image of Ryan; he looks to be in good shape.  Later in his career, Ryan would play another Clanton:  Ike Clanton, nemesis of Wyatt Earp, in Hour of the Gun (1966).  It is tempting to see this as a sequel of sorts to Badman’s Territory (1946), a Randolph Scott movie that also featured the James gang in Quinto, and Lawrence Tierney as Jesse James.  Neither is very historical.