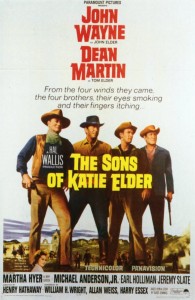 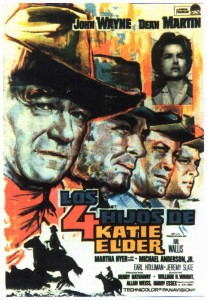 There is no Katie Elder in this film; she has died and the movie starts with her ca. 1898 funeral in Clearwater, Texas.  Three of her four sons are in attendance, with the oldest watching from a nearby hill.  The four brothers are John (John Wayne), a well-known gunman who hasn’t been home in ten years; Tom (Dean Martin), a gambler who has also been gone for years; Matt (Earl Holliman); and Bud (Michael Anderson, Jr.), who has been going to the Colorado School of Mines for the last year but whose continued education there is in question.  None of them appear to have formed their own families or relationships that we see.

Katie had been living in semi-poverty since the death of her husband Bass Elder several months previously under suspicious circumstances.  Her former ranch is now owned by large landowner and gunshop proprietor Morgan Hastings (James Gregory), who is outwardly friendly but worried about John Elder’s presence.  He has hired gunman Curley (George Kennedy) to keep an eye on John’s comings and goings. 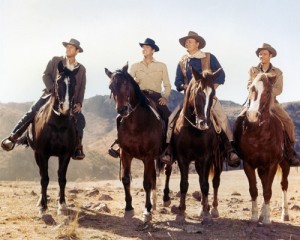 Meanwhile the Elder brothers are trying to find out more about their mother’s circumstances and death.  Her best friend was a young woman named Mary Gordon (Martha Hyer), who is given to reminding the brothers how little they had been around.  Local sheriff Billy Wilson (Paul Fix) also worries that the brothers will stir up trouble, although he also worries about his own overzealous deputy Ben Latta (Jeremy Slate), who tends to see things in uncomfortably black-and-white terms.

The Elder brothers are finding that (a) their mother had a lot of grit and everybody liked her, and (b) their father was shot in the back after losing the ranch to Morgan Hastings in a card game.  A man from Pecos who had corresponded with Kate Elder about a herd of horses stops by, and the Elders agree to take 200 horses and drive them to Colorado for sale, to finance Bud’s continued college career. 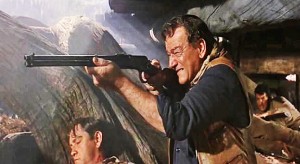 Battle at the bridge.

While they are gone to Pecos to get the horses, Billy rides out to where they are staying and Morgan Hastings shoots him from a distance with a rifle.  As the Elders return with the horses, they are taken prisoner by a posse and put in jail, where they continue to argue over how to respond.  John Elder seems to win the discussion, largely by virtue of being the oldest and being John Wayne.  While being transported by wagon, they are ambushed by a Hastings-led party.  They manage to get a few weapons and fire back; deputy Ben Latta and Matt are killed, and John gets Curley.  John, Tom and Bud make it back to town to get a doctor for Bud, who has been shot.

In town, Tom captures Hastings’ weaselly son Dave (Dennis Hopper).  Dave doesn’t really tell them anything, but Hastings shoots him and they find out that Hastings had cheated and killed their father.  In the end, Tom is badly wounded and John ignites and explodes the gun shop while Hastings is inside.  (In his gun battle with Hastings, it appears that John Elder gets 14 shots out of his Colt Peacemaker without reloading.  The final shot hits and ignites a barrel of gunpowder in Hastings’ gun shop.)

John Elder:  “All we want to do is make you end up rich and respectable.  You fight us every step of the way.”

Bud Elder:  “I don’t want to be rich and respectable. I want to be just like the rest of you.” 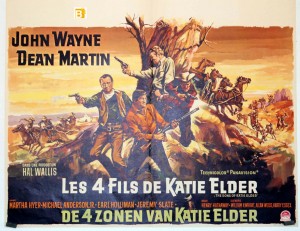 In some ways, this is a typical “unscrupulous land baron trying to take over the entire range” movie (see The War Wagon, for example, and any number of other such westerns).  It reunites John Wayne and Dean Martin from Rio Bravo; Martin isn’t as good in this one.  Earl Holliman is good but his part is underwritten; Michael Anderson as youngest brother Bud is largely just annoying.  Michael Anderson Jr. was in this and as a young soldier in Major Dundee before he drifted off to television work.  James Gregory and George Kennedy are good as patently bad guys.  The Martha Hyer character is unnecessary and doesn’t really do much.  There is a good cast of supporting character actors:  Paul Fix, John Doucette, Strother Martin, Percy Helton, Rhys Williams, John Qualen et al.  Rodolfo Acosta, who often played Indian chiefs (Hondo, Trooper Hook), is here one of Hastings’ gunmen.  Chuck Roberson, one of Wayne’s favorite stand-ins and stuntmen, is present as well.

This was Wayne’s first movie after having a cancerous lung removed.  He was not in good health, and he looks significantly older at 58 (playing a character who is supposedly around 40) than he had in The Comancheros four years earlier.  In general, this is a middle-of-the-pack John Wayne western from the 1960s—good enough but not remarkable.  It was remade in a modern urban setting with Mark Wahlberg as Four Brothers in 2005.

Shot in color in Durango, Mexico.  Cinematography is excellent, by Lucien Ballard.  Good music is by Elmer Bernstein (The Magnificent Seven, The Comancheros).  The hearse featured at the funeral of Katie Elder currently resides in front of the Haunted Mansion at Walt Disney World.  In western history, there was a famous Kate Elder:  “Big Nose” Kate Elder, a prostitute of Hungarian origins and girlfriend of legendary gunfighter-gambler-dentist Doc Holliday.