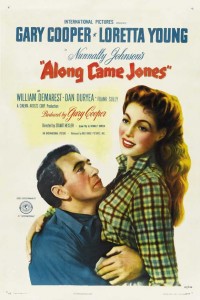 Although he was known for westerns earlier in his career, Gary Cooper didn’t make many of them during the 1940s when he was at his peak.  He had won an Oscar as Best Actor for 1941’s Sergeant York.  He was nominated again in 1943 and 1944 for Pride of the Yankees and For Whom the Bell Tolls.  He would win again in 1953 for High Noon, of course.  Loretta Young only made three westerns during her entire career.  By this time, they had both been making movies for almost twenty years, since the days of the silent films.  This was the only time they appeared together.

This comedy is an extended case of mistaken identity.  It doesn’t start out as a comedy; in the opening scene, a stage is robbed by a masked Monte Jarrad (Dan Duryea), who shoots both the driver and the shotgun guard.  At least one of them survives to wound Jarrad badly.  Wanted posters go up for Jarrad and his geezer companion Uncle Roscoe.

Cut to a sign outside Payneville (pronounced “painful”), where George Fury (William Demarest) and Melody Jones “out of high Montana” (Gary Cooper) determine that they’ve taken the wrong fork three or four hundred miles back.  In Payneville, the MJ initials on Melody’s gear are taken to mean that he’s Monte Jarrad.  And he spots the beauteous Cherry de Longpre (Loretta Young), with whom he is instantly taken.  What he doesn’t know is that Cherry is Jarrad’s childhood pal and now girlfriend.  She’s caring for Jarrad because he can’t ride, due to his wound. 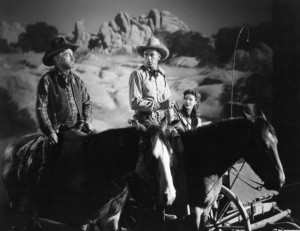 Cherry talks Melody into taking Jarrad’s saddle south so the posse hunting Jarrad will follow him, but he goes back to town.  Now he’s caught between most townsfolk, who think he’s Jarrad, and those who know Jarrad, who think he’s killed Jarrad.  Neither side wishes him any good.  This is complicated by the fact that, although Melody carries a gun like everybody else, he’s not very good with it.  Jarrad is very good indeed, and nasty.

Just as one of Jarrad’s gang is about to shoot Melody, he’s rescued by Cherry.  Meldoy notes, “If there’s anything in the world I like, it’s gettin’ saved from being shot.”  Now Cherry wants him to take back the loot from Jarrad’s robbery, which Jarrad has stashed in an old adobe house.  When they get to the hiding place, the express agent is there and takes them prisoner, until somebody from outside the house shoots him.  They don’t get away quickly enough, and the posse finds them and takes them prisoner again, two or three times.  One almost expects the Marx brothers to show up. 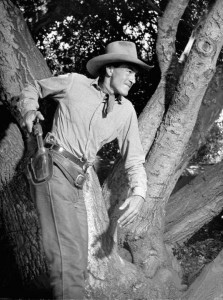 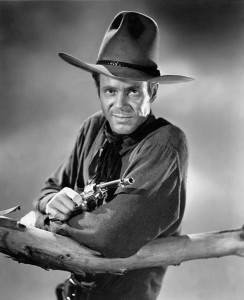 Cooper as Jones, Duryea as Jarrad.

Finally, Melody, Cherry and George manage to get away and make their way back to Cherry’s ranch.  George has been shot by Jarrad and left for dead until Cherry rescues him.  Jarrad forces Melody to trade clothes with him, and intends to kill him and destroy his face so everyone will think Jarrad is dead.  The posse descends on the ranch, and there is an extended shootout.  Finally, it appears to be Jones against Jarrad, and the odds are all with Jarrad.  He hits Jones three times, calling it each time (much like Liberty Valance would do, twenty years later), when a Winchester bullet comes from behind Jones and catches Jarrad in the forehead.

Melody spends three weeks in jail while all this is sorted out, and he gets the reward for killing Jarrad.  First he figures that George shot Jarrad, but George says he was too weak to move at the time.  Then he realizes it must have been Cherry, shooting at him but getting Jarrad.  After Cherry demonstrates her marksmanship (“When I aim at something, I hit it, and when I hit something it’s what I aimed at“), Melody decides to stay and put down roots with her. 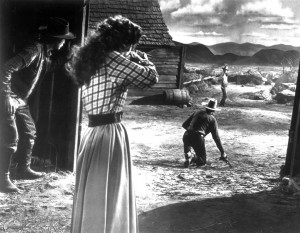 Cherry takes a hand in the proceedings, but Melody doesn’t see it.

It’s all pleasant enough stuff.  With its time period, the presence of William Demarest and the fact that it’s a comedy, it is reminiscent of the movies of Preston Sturges.  But the producer was Cooper himself, who wasn’t very good at that end of things.  The leads, Cooper and especially Young, are enormously attractive.  Cooper sings “Old Joe Clark” at various points in the movie, and he’s not much of a singer.  He had problems during filming due to lack of preparation and because he often couldn’t deliver his lines in the rapid-fire manner requested by the director.

One joke usually isn’t enough for a whole movie, but Cooper manages to bring it off.  Joel McCrea called him “the greatest exponent of the manure kicker school of acting ….  The idea is to scuff around barnyard dirt while muttering some phrase like ‘Aw shucks, Miss Nancy.’”  Of course Cooper conveyed much more than that, but he comes closest to that description in this film.  Cecil B. DeMille, who, like the FBI, seemed to have no sense of humor, told Cooper he shouldn’t mock his heroic image in this fashion.  The movie did well at the box office, though. 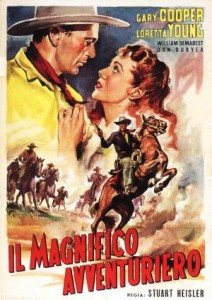 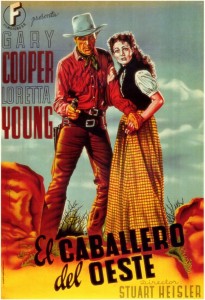 For Loretta Young in another good western, see her in Rachel and the Stranger (1947), with William Holden and Robert Mitchum.  Crusty William Demarest makes a fine sidekick; he was good again as the oldest Confederate prisoner in Escape from Fort Bravo.  Duryea could be an excellent villain; see him as Waco Johnnie Dean in Winchester ’73 five years later.  Here he’s unrelievedly nasty.

In an era of singing cowboys, perhaps you could get away with naming one Melody Jones; it wouldn’t work today.  It does seem to be an ironic name, since he can’t sing and shows little talent with a harmonica, either.  The screenwriter was Nunnally Johnson, based on a novel by Alan LeMay (author of the novel The Searchers).  Unusually for a writer, Johnson had enough clout to get his name over the title of the movie in the credits:  Nunnally Johnson’s Along Came Jones.  Norman Rockwell did some of the poster art for the movie.  90 minutes, in black and white.