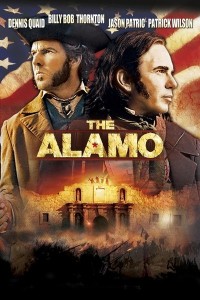 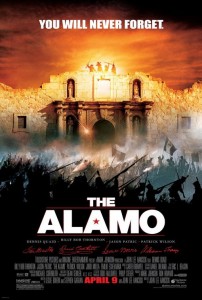 This is both the best and the most historically accurate cinematic depiction of the siege of the Alamo in San Antonio in 1836 in what is now the state of Texas, and its immediate aftermath.  That is, we know that the siege ended in the deaths of all the defenders, but those deaths are not the real end of the story.  The full story includes the battle of San Jacinto, which was as overwhelming a victory for the Texans as the Alamo had been for the Mexicans.  It was also the occasion for the battle cry “Remember the Alamo,” and it is the reason the Alamo holds its exalted place in the memory of Texans.  For the historically minded, this is still not entirely accurate, but it’s better in that regard than most, and much better than John Wayne’s 1960 version of the story.

It is well known that the Alamo was defended by about 200 Texans, holding out against the Mexican army of Santa Anna for almost two weeks.  Finally the Texans were overrun by Santa Anna’s army of more than 2000 Mexican soldiers, and all the defenders were killed.  From the side of the Texans, the story revolves around three personalities:  Col. Jim Bowie, former knife fighter and land speculator from Louisiana and commander of a small volunteer militia force; William Barrett Travis, a lawyer, regular army officer and overall commander during the siege; and David Crockett, well-known Tennessee frontiersman and former Congressman. 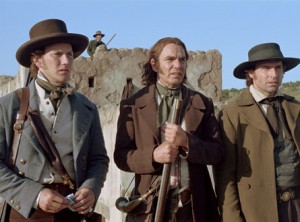 The film does a good job of showing the volatile relationship between Travis and Bowie.  The priggish, authoritarian Travis is the hardest to make likeable, and Patrick Wilson does a good job with him, although he doesn’t have the same dramatic weight as the actors playing the other two principals.  Jason Patric is also excellent as the hot-tempered knife-fighting Bowie, becoming incapacitated with typhoid during the siege.  But best of all is Billy Bob Thornton, the most human Crockett ever portrayed on film.  This is the most carefully written of the film’s roles, with Crockett always aware of the difference between himself as an actual person and his larger-than-life image.   “If it were just me, simple David from Tennessee, I might go over that wall one night and take my chances.  But this Davy Crockett feller—people are watching him.”  He notes that he only wears a fur cap when it’s really cold. 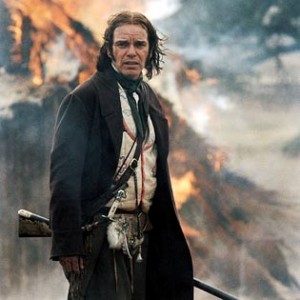 Crockett on the walls.

As the film opens, Crockett in Washington attends a performance of The Lion of the West, a highly fictionalized stage depiction of Crockett’s supposed life and accomplishments.  Out of office, he heads for Texas for a new start, to find himself at the Alamo as Texas’ struggle for independence develops.  As the most publicly prominent defender, he has no authority but what his personality brings.  He mediates quietly between Travis and Bowie and is sensitive to the effects of leadership on the men’s morale.  As the Mexican band plays the threatening Deguello bugle call at twilight, Crockett takes up his fiddle and from a post on the walls provides a string counterpoint to the the musical and military threat.  As the end looms and it is clear that no more reinforcements or supplies will be coming, he urges Travis to be straight with his men, providing the occasion for Travis’ finest moment.  As Bowie lies helpless with typhoid, it is Crockett who wordlessly slips two cocked pistols into his hands on the eve of the attack.  There is a scene at the end in which a captured Crockett is invited to plead for his life and instead gives Santa Anna the opportunity to surrender to him.  That is invented, since the historical authorities differ on exactly how Crockett died at the Alamo.  But it makes for a good story.  There is a brutality to the way the Mexicans overrun the Alamo, as there inevitably would have been to such matters in real life.

Other performances that stand out include actual Texan Dennis Quaid as Sam Houston.  Under the stress of events as they develop, Houston almost always appears harsh and ill-tempered in such depictions (see Richard Boone’s performance in the 1960 version of the story, for example), and that is true with Quaid as well.  Emilio Echevarria is good as the vainglorious Santa Anna, and so is Jordi Moliá in a very limited role as Juan Seguin. 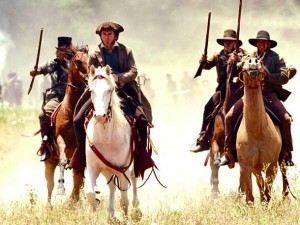 Dennis Quaid as Sam Houston, riding to the Battle of San Jacinto.

The production design is excellent, with an attempt to depict with the clothes and weapons men would actually have used in 1836.  I’m not fond of Sam Houston’s tricorn hat, but it might be authentic.  There is a painting by Seymour Thomas of Houston at the battle of San Jacinto wearing a tricorn, but it was painted in 1892.  Good music is by Carter Burwell, who also did the score for True Grit (the Remake).  The film’s pacing can be a problem, especially when the film is focusing on the ailing Jim Bowie, but it works if you have an eye for the actual historical events.  At 137 minutes, there was a lot that was cut to arrive at the theatrical release version, including most of the role of Laura Clifton as Susanna Dickinson, wife of an officer and one of the few surviving witnesses to the events at the end.  If you enjoyed this, you could wish for an extended cut.  If you didn’t, it’s too long already.

Disney didn’t do a good job of promoting this film, and it was not a success at the box office.  It cost $145 million and made back less than a quarter of that, trounced by Mel Gibson’s The Passion of the Christ.  But if you’re looking for a cinematic account of the Alamo and related events from Texas’ fight for independence from the Texans’ point of view, this is the best available.  Modern critics of Manifest Destiny won’t enjoy it as much. 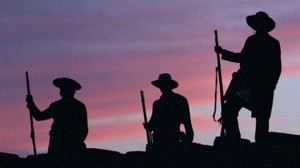 Roger Ebert pointed out one of the problems with expectations about a film based on iconic events like this.  “The advance buzz on ‘The Alamo’ was negative, and now I know why:  This is a good movie.  Conventional wisdom in Hollywood is that any movie named ‘The Alamo’ must be simplistic and rousing, despite the fact that we already know all the defenders got killed.  (If we don’t know it, we find out in the first scene.)  Here is a movie that captures the loneliness and dread of men waiting for two weeks for what they expect to be certain death, and it somehow succeeds in taking those pop-culture brand names like Davy Crockett and Jim Bowie and giving them human form….

“Much of the picture takes place at night, illuminated by campfires and candlelight, and Hancock’s cinematographer, the gifted Dean Semler, finds color and texture in the shadows that evoke that hour between midnight and dawn that Fitzgerald called the dark night of the soul.  Oddly enough, as Santa Anna’s troops march up to within 100 yards of the Alamo, there seem to be hardly any watchmen to see them, and when they attack, it is a surprise.

“The battle scenes, when they come, are brutal and unforgiving; we reflect that the first Mexicans up the scaling ladders must have known they would certainly die, and yet they climbed them heedlessly.  This intimate hand-to-hand conflict is balanced by awesome long shots, combining the largest sets ever built by modern Hollywood with some special effects shots that are generally convincing.”