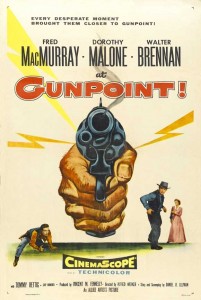 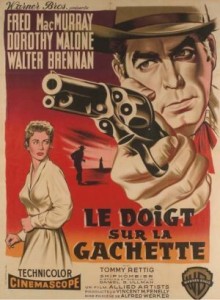 A variation on the High Noon theme, which was made two or three years earlier than this movie.  Peace-loving storekeeper Jack Wright (Fred MacMurray) kills the leader of an outlaw gang by a stroke of luck while they’re trying to rob the local bank.  Hailed as a hero, Wright realizes deep down that he’s a coward, and, more obviously, he’s not really any good with a gun.  When the surviving gunmen return to town, thirsting for revenge, the townsfolk expect Wright to singlehandedly stand up to the villains. When he asks for help, his neighbors turn their backs on him, ordering him to get out of town to avoid further trouble. Only the doctor (Walter Brennan) and Wright’s wife (Dorothy Malone) remain loyal.  Ultimately, Wright finds that he may not be as cowardly as he had thought.  After Wright gives a stirring speech in a saloon, the townspeople do come to his aid and the gang is captured.

This is different from High Noon in that the man in danger has not deliberately taken that risk—he’s not a marshal or sheriff—and because eventually the town does stick up for him.  Kind of talky.  Good performance by MacMurray; his son is played by Tommy Rettig, who went on to star in Delmer Daves’ The Last Wagon and in television’s Lassie.  The crusty but beloved town doctor (Walter Brennan) is essentially the same character as John McIntire in The Tin Star. 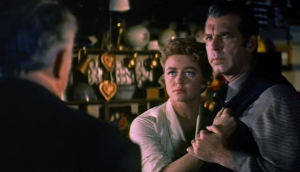 This is one of those 1950s westerns dwelling on the interaction between a town and its sheriff, the nature of community and the kind of support a sheriff should expect from those he protects.  The most famous is High Noon, but see also The Tin Star, Warlock and Rio Bravo, as well as the later Lawman.  This also bears some resemblance to The Fastest Gun Alive a couple of years later; the difference is that Glenn Ford in Fastest Gun is good with a gun but doesn’t want to use it.  The cowardly townspeople were becoming a cliché by the time this movie was made.  Another comparison might be with 1967’s Hombre, in which Paul Newman has been rejected by others for living as an Apache.  He clearly owes them nothing, but nevertheless comes to their aid against his own inclinations simply because he is the one best suited to do so.   In color, at 81 minutes.