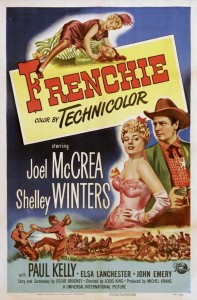 In color, so it had a pretty good budget for a western in 1950—a time when many, if not most, westerns were still in black and white.  That would not be true by the end of the 1950s.  It’s an obvious but less effective remake of Destry Rides Again.  The title refers to a saloon owner, just as it was the name of Marlene Dietrich’s saloon girl character in Destry.

Joel McCrea is Tom Banning, the son of the former sheriff of Bottleneck, returning to restore some law.  His character has echoes of two James Stewart characters—Destry’s aw-shucks, don’t-need-a-gun mild demeanor, and Ransom Stoddard’s bringing-eastern-law-to-the-uncivilized-west earnestness.  Frenchie Fontaine (young Shelley Winters) is also returning from running a New Orleans gambling hall, to find the murderer of her father from 15 years ago.  She sets up the Scarlet Angel, with the help of Lance Cole (John Russell) and the Countess (Elsa Lanchester).  The new establishment ends up taking business away from the seedier but long-established Chuck-a-Luck, owned by quasi-outlaw Pete Lambert (Paul Kelly). 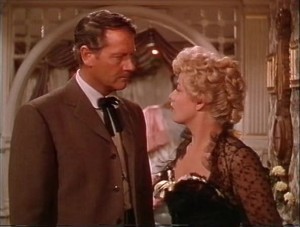 Meanwhile, Banning’s former girlfriend Diane (Marie Windsor) had decided to marry the local banker (John Emery) three years earlier but now regrets passing up true love.  By the end, the murderer of Frenchie’s father is punished (dead), the banker is dead and Banning and Frenchie get together, although there is little apparent chemistry between McCrea and Winters.

The direction is pedestrian and the writing isn’t great.  The plot is too convoluted.  McCrea’s dialogue is too down-home, aw-shucks in a sort of replay of James Stewart’s mannerisms, and Winters seems too young, a bit too slutty and not smart enough for the character she’s playing, who’s supposed to be the principal romantic interest.  It’s much the same as she played a bit later in Winchester ’73, but it doesn’t work as well when she’s got a larger part and more depends on her.  (Compare her with the young Angie Dickinson in Rio Bravo, who plays the role much more successfully.)  As a Destry remake, this is not much remembered.  Audie Murphy would show up in another in 1954, but neither of these is anywhere as good as the 1939 movie.