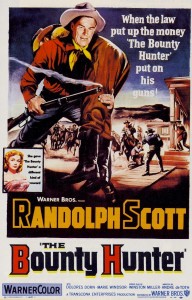 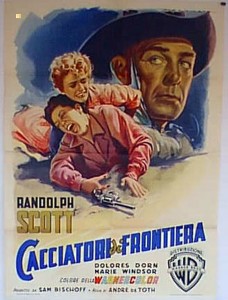 A formulaic western with an improbable plot, which is nevertheless engaging on a minor level.  Randolph Scott is the titular merciless bounty hunter Jim Kipp, engaged by the Pinkerton agency to find three unknown train robbers responsible for several deaths near Dodge City a year previously.  After a shoot-out with a posse killed four of the seven robbers, the three survivors had escaped with the loot into somewhere in the New Mexico-Texas-Colorado area.

Scott tracks the three off into the badlands with a cowboy’s minimal baggage, figuring how far they could have gone with the water available to them.  Yet when he arrives in the remote and unfriendly town of Two Forks, over the course of a couple of days he demonstrates that he’s brought with him at least three hats and several changes of clothes.  The local Doc Spencer (Harry Antrim) lies to Kipp about having treated a wounded man shot in the leg; Kipp is intrigued both by the lie and by the Doc’s comely blonde daughter Julie Spencer (Dolores Dorn).  Nobody seems to like Kipp much.  (“Well, you know what they say about you:  you’d turn in your grandmother on her birthday if there was a reward on her.”).  But that doesn’t get to him. 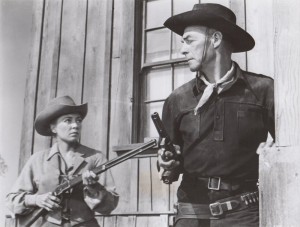 Getting the drop on Kipp.

Kipp demonstrates his humanity by letting a young prison escapee go and revealing how his storekeeper father’s killing set him on his present course.  He acts as an agent provocateur to get the bad guys to reveal themselves, and, surprisingly, Ernest Borgnine (as antagonistic, limping hotel clerk Bill Rachin) ultimately isn’t one of them.  The three improbably turn out to be the local postmaster (Dub Taylor), the sheriff (Howard Petrie), and a resourceful and not unsympathetic saloon girl Alice Williams (frequent movie bad girl Marie Windsor).  The movie ends with two of them having been killed by others of the three.  In the end, Kipp gets the girl and converts to being a lawman in Two Forks, much like Henry Fonda’s redemption in the more convincing The Tin Star. 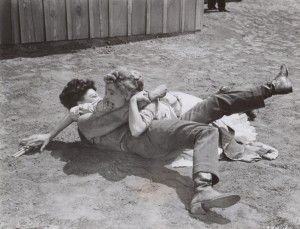 The editing’s not great, with a few jerky cuts.  Director De Toth shot this in 3D, like his The Stranger Wore a Gun, also with Randolph Scott, but it was released in the usual 2D.  That accounts for some of the strange camera angles.  You can also see too clearly where doubles are used (for Scott while riding bareback, and for stocky character actor Dub Taylor jumping off a roof), for example—sloppy directing where the camera’s too close.  The movie is well paced, however, and modestly engaging, with Scott mostly in his cheerfully confident mode.  Romantic interest Julie Spencer is played by Dolores Dorn, 36 years younger than Scott and married to Franchot Tone.  She’s eclipsed by Marie Windsor, though.  Vance Edwards has a bit part as Tyler MacDuff, and at the end look for a young Fess Parker as one of three wild cowboys who ride into Two Forks and quickly back out again.

One of several westerns made by De Toth in the late 1940s and early 1950s, mostly with Randolph Scott.  The low-wattage cast and sloppy editing seem like evidence of a low budget and quick production, but the movie’s not bad.  The color wasn’t good on the print I saw.  Even on TCM, which makes a point of using the best prints available, the print looked dingy and in need of restoration.  Not available on DVD at this point, although you can rent or buy a digital SD version on Amazon Prime and probably elsewhere..

Not to be confused with the terrible 2010 movie of the same name with Jennifer Anniston and Gerard Butler.