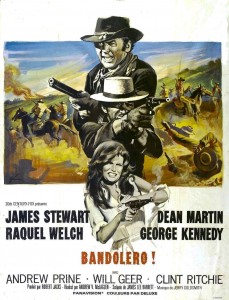 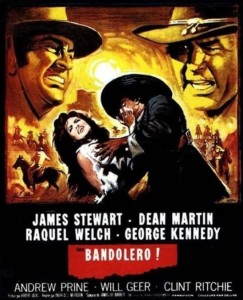 Director Andrew McLaglen was the son of actor Victor McLaglen, and through his father long had contacts with John Wayne and his Batjac production company.  He made his initial reputation as a television director on many Have Gun Will Travel episodes in the late 1950s and early 1960s.  By the mid-1960s he had graduated to movies, making a string of not-terribly-distinguished westerns.  This is one of two westerns directed by McLaglen with ! in the title, along with the John Wayne vehicle McLintock!  It’s kind of miscast and schizophrenic.  The first half, with James Stewart as Mace Bishop saving his outlaw brother Dee Bishop (Dean Martin) from hanging, has some humor.  The second half, with its chase into Mexico and desperate fight against bandidos, turns grim.  Apparently the word “bandolero” is another Spanish term for outlaw or bandit.

The movie opens in Val Verde, Texas, in 1867.  James Stewart and Dean Martin don’t seem much like brothers; supposedly they were on opposite sides in the late Civil War, with Dee (Martin) riding with Quantrill in the nasty guerilla war on the Missouri borders, and Mace (Stewart) fighting for the Union with Sherman.  Raquel Welch has big 1968 hair (not to mention other attributes), and this is not her worst performance.  She is a former Mexican prostitute, now the trophy wife of wealthy rancher Stoner (Jock Mahoney), who gets killed when Dee’s gang tries to rob the local bank in Val Verde in an early sequence.  The robbery is botched, and the robbers are captured and sentenced to hang, necessitating their rescue by Mace. 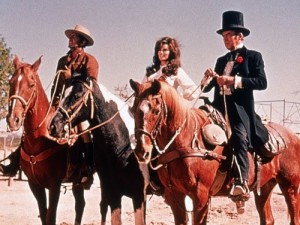 Mace shows up disguised as the hangman.  In making their escape, the outlaws snatch Mrs. Stoner (Welch), for whom the sheriff July Johnson (George Kennedy) has romantic intentions now that her husband is barely dead.  Johnson leads the posse in pursuit, with his deputy Roscoe (Andrew Prine).  In the chase, Maria Stoner falls in love with Dee Bishop, who is badly in need of redemption through the love of a good (even if formerly bad) woman with big hair.  Mace is increasingly ill at ease with Dee’s outlaw compatriots.  But Mace isn’t as clean as he might seem, either.  On the way out of town, he also robbed the local bank, largely because it seemed easy.

Mace Bishop:  “Well, Dee, the bank was there… and I was there… and there wasn’t very much of anybody else there… and it just seemed like the thing to do.  Y’know, it’s not like you didn’t – something you never heard of.  Lots of people rob banks for all sorts of different reasons.”

Dee Bishop [now bemused]:  “You just walked into a bank and helped yourself to ten thousand dollars ’cause it seemed like the thing to do?”

Mace Bishop:  “That’s about the way it was, yeah, as, as well as I can remember, yeah.” 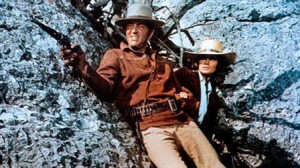 Heading south into the northern Mexico deserts, the outlaws’ escape and, to be fair, the posse’s pursuit, is complicated by a swarm of Mexican bandidos.  Obviously they like Maria Stoner, too, and the lure of the bank money doesn’t hurt.  After the extended final shootout with the bandidos in the deserted Mexican town of Sabinas, hardly anybody is left alive, and the survivors aren’t who you’d expect according to the classic formulas.

The movie’s not terrible, but not particularly memorable.  As a general principle, beware movies with “!” in the title.  Stewart made a string of not-so-good westerns beginning in the mid-1960s (Shenandoah, The Rare Breed, Firecreek); he obviously missed directors John Ford and Anthony Mann.  Dean Martin is better in this than he is in Rough Night in Jericho or in his movies with Frank Sinatra and other ratpackers, but he’s unusually dour for Martin.  Raquel Welch was at the peak of her fame (or notoriety), and she appeared during this window in a few westerns.  Look for her, for example, in 100 Rifles with Jim Brown and Burt Reynolds, and in the female revenge saga Hannie Caulder.  This may be the best of her westerns, but that’s not saying much. 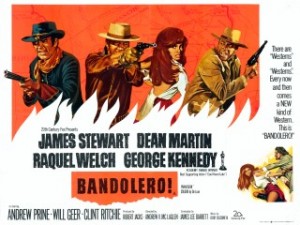 There’s good music by Jerry Goldsmith, and excellent cinematography by William Clothier.  Shot mostly in southern Utah and northern Arizona, with a couple of other stops, in color at 106 minutes.

Note:  Did Larry McMurtry have something to do with this film?  Note the character names that get used in the Lonesome Dove novel and mini-series in the mid-1980s:  a sheriff named July Johnson, with a deputy named Roscoe.  And a bad man named Dee, to be hanged.