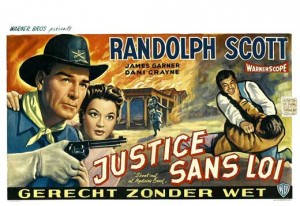 Made in black and white at a time when most westerns, even such low-budget productions as Budd Boetticher’s Ranown movies starring Randolph Scott, were in color.  To the modern viewer, the attraction is the cast, with Randolph Scott in his prime, James Garner in an early movie role about the time he was starting out in television’s Maverick series, and the young Angie Dickinson two years before Rio Bravo.

Ex-cavalry Captain Buck Devlin (Randolph Scott), Sgt. James Maitland (young James Garner) and Pvt. Wilbur Clegg (Gordon Jones) are trying to find out who’s providing the faulty ammunition that’s getting soldiers killed in fights with the Sioux.  They are helped by Quakers, and claim to be Quakers themselves as they go undercover to investigate thefts in the area of Medicine Bend, and look for the poor quality powder. 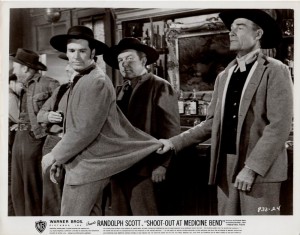 Devlin develops a romantic relationship with the much younger Priscilla King (played well by Angie Dickinson–an even greater age difference than she would have with John Wayne in Rio Bravo), and Maitland with Nell Garrison (Dani Crayne), a saloon singer who works for E.P. Clark (James Craig).  Maitland and Clegg infiltrate Clark’s shady business by taking jobs at his store. Clark, now suspicious of the three strangers in town, tries to lure Devlin into a trap, but fails.  Devlin steals Clark’s ill-gotten gains one night and gives the money back to the pioneers from whom it was originally stolen.  As matters develop, Clark is behind the robberies and shoddy merchandise, and Maitland and Clegg almost get hanged before Devlin bails them out. 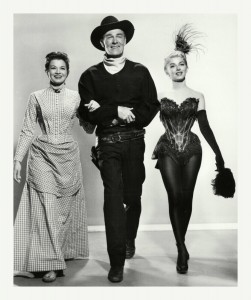 Clark’s operation is eventually uncovered and Devlin kills him in, ironically given the film’s title, a fistfight. The film ends with Devlin preparing to ride into the sunset with Priscilla King.

Warner Brothers was worried about declining revenues on Scott movies in the mid-1950s, as well as competition from television (in which it was gleefully participating, with programs like Cheyenne and Maverick).  For those reasons, they held down costs here by shooting the film in black and white.  It’s not exactly great; for example, it’s not as good as the westerns Scott made with Boetticher about this time.  But it’s not terrible, either.  It’s almost like recent movies with comic-book heroes, with the protagonist (Scott, in this case) assuming a secret identity and fighting crime with a mask.