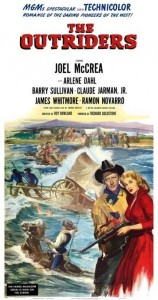 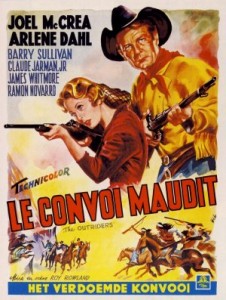 A good cast in a better-than-average Civil War-era wagon train-with-gold western (e.g., Virginia City, Westbound).  Will Owen (Joel McCrea), Jesse Wallace (Barry Sullivan) and Clint Priest (James Whitmore) are the outriders of the title.  At the start, they are Confederates held as prisoners by Yankees in Missouri.  They escape, only to be caught by Keeley (Jeff Corey), a Quantrill affiliate whose dirty exterior and expressionist makeup advertise his moral dubiousness.  Keeley.forces the three, since Owen is the only one in the band who knows the Santa Fe Trail, to go to Santa Fe, where they are to join a wagon train to St. Louis laden with Yankee gold.  It is led by Don Antonio Chaves (silent film star Ramon Novarro), who politely refuses their offer to accompany his train.  He does have a stagecoach carrying war widow Jen Gort (Arlene Dahl) and her youthful brother-in-law Roy Gort (Claude Jarman, Jr.) to St. Louis.

Keeping their distance initially, Owen, Wallace and Priest shadow the train until they are able to rescue it from attack by Apaches; then Chaves welcomes them.  Owen becomes the trail guide and honcho, all the while planning to leave the train to be attacked by Keeley once they reach Cow Creek in Missouri.  Aside from the usual wagon train complications (storms, horse stampedes, yet more Indians, fording a raging river, near mutiny by the drovers), Owen and Wallace both develop a romantic interest in Jen Gort; Owen’s misgivings about his deception deepen.  While fording a swollen river, young Roy Gort is drowned. 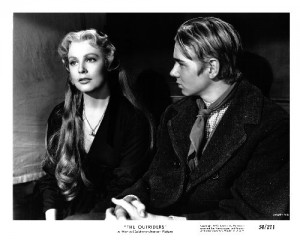 As they near the attack point in Missouri, Owen gets the news that the war is over.  Wallace doesn’t care, and presumably neither does Keeley.  They just want the gold whether the war is over or not.  Owen leads the defense against the now-outlaws, his former colleagues.  Wallace escapes the train to join the raiders, both Keeley and Chaves are killed in the early moments of the attack, and Owen’s military tactics start to turn things in favor of the train until his final confrontation with Wallace.  And he and Jen ride off into the sunset together.

This is a watchable film, although not much seen these days.  The print I saw (on Encore Westerns) was serviceable but not great.  At this point McCrea is in the final stage of his career, appearing solely in westerns.  But he’s good, if getting to be a little long in the tooth, here.  He’s been a star for almost twenty years but still has more than a decade to go in movies. 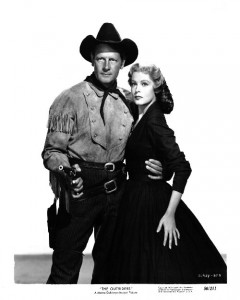 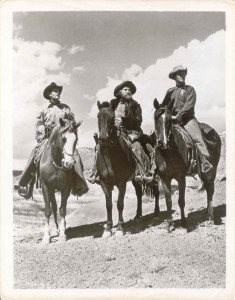 With the possible exception of the beautiful Arlene Dahl, the cast is excellent, although Whitmore is mostly obscured by a wig and false beard.  Novarro, once one of the biggest stars in silent films, is very good, playing Chaves with depth and smoothness.  Perennial villain Ted de Corsia is one of Keeley’s henchmen.  In a career of minor supporting roles, Jeff Corey would show up eighteen years later in both Butch Cassidy (as a friendly sheriff) and the original True Grit (as Tom Cheney, the killer of Mattie Ross’s father).  Claude Jarman, Jr., now remembered exclusively (if at all) for The Yearling, managed about this time to appear with all three of the major western film stars:  with John Wayne (Rio Grande), Joel McCrea (The Outriders) and Randolph Scott (Hangman’s Knot, another good Confederates-at-the-end-of-the-Civil War western) before his career fizzled.  Of the three, Randolph Scott was the biggest box office star in 1950.  In fact, he was the biggest male box office star in Hollywood that year.  In color, just over 90 minutes.