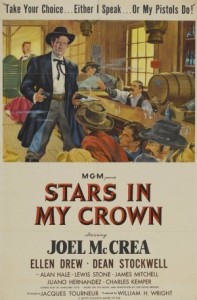 This is a slice-of-small-town-Americana film, with a dose of traditional religion thrown in, as one might guess from the title, which is also the title of an old-time hymn.  Josiah Dozier Gray (Joel McCrea in his most overtly decent moral-guy mode) is a Civil War veteran and a preacher in Walesburg, Tennessee, a town that is afflicted by lack of a church, and subsequently by typhoid, racial bigotry and a young doctor who doesn’t believe in God.  When Gray first shows up in town, he gives his first sermon in a saloon, using his guns to quiet the unruly non-church-going crowd.  The town builds a church, and Josiah settles in and marries Harriet (Ellen Drew).  They take in her orphaned nephew John Kenyon (Dean Stockwell) to raise, and from time to time it’s John’s adult voice that narrates the film (with the voice of Marshall Thompson). 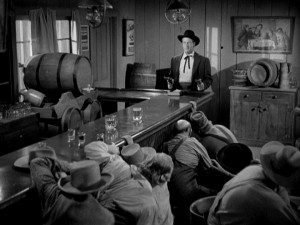 Preaching in the saloon.

Life happens in Walesburg.  Beloved and crusty old Doc Harris (Lewis Stone) dies, and his place is taken by his son young Doc Harris (James Mitchell), who believes in science, not religion.  He doesn’t fit in well and wants to move to a larger city, but he also wants to marry the school teacher Faith Radmore Samuels (Amanda Blake, with a symbolically named character).  Faith doesn’t want to leave Walesburg and postpones responding to young Doc’s proposal of marriage.

John comes down with typhoid, and young Doc warns Josiah to stay away from people to avoid passing on the contagion.  He doesn’t listen, and the disease spreads.  John recovers, but it looks like teacher Faith won’t.  Josiah feels guilty that he didn’t do what Doc said, even though they both know the disease is water-borne, and he withdraws from the town and from his preaching, questioning his faith and his role in the community.  When Faith is dying (both literally and figuratively), young Doc sends at last for Josiah.  When she doesn’t die, Josiah and young Doc are reconciled; young Doc Harris has regained his Faith, and Josiah regains his faith as well.  John figures out that it was the schoolhouse well that spread the disease, and Josiah is vindicated. 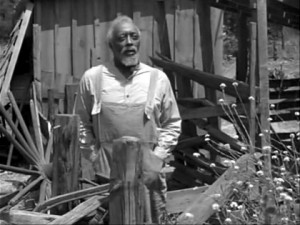 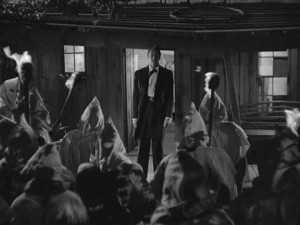 Uncle Famous (Juano Hernandez) at his cabin after the place has been trashed; Gray faces down the nightriders armed with only his moral authority and his wits.

An old black former slave, Uncle Famous Prill (Juano Hernandez), is targeted by white-sheeted night riders, who plan to hang him when he won’t leave.  The old Josiah would have used his guns, but now he faces down the night riders armed only with his moral authority and a little guile.  The Isbell family, led by patriarch (and old war friend of Gray) Jed Isbell (Alan Hale, Sr.) with several sons, backs him up, silently and unknown to Josiah, with guns.  But they too, even as non-church-goers, are impressed with the parson’s moral authority.  As the movie ends, the entire Isbell clan shows up at church at last.

In one of the movie’s better lines, after Gray has read Uncle Famous’ will to the nightriders and shamed them into leaving, the two-page document  falls to the ground, and John picks it up.  Seeing two blank pieces of paper, he says, “There’s no will here!”  “Sure there is, son,” responds Josiah.  “It’s the will of God.”  Not everybody could make that work, but McCrea handles its weight effortlessly with a mix of natural authority and humor.

By the end of the movie all has been conquered (including the preacher’s own doubts in himself), and the preacher and the young doctor have come to a certain appreciation of each other.  Joel McCrea is perfectly cast as parson Josiah Dozier Gray, and he said on at least one occasion that this was his personal favorite among his movies.  And in a long career, he was in some very good ones, working with such directors as Alfred Hitchcock, Preston Sturges, George Stevens, Cecil B. DeMille and Sam Peckinpah.  Ellen Drew is good as his supportive wife, and Dean Stockwell was at his peak as a child actor.  Stockwell and McCrea would appear together again in Cattle Drive (1951) the next year.  The supporting cast is very strong, with some very good character actors—Alan Hale, Arthur Hunnicutt, Juano Hernandez, Charles Kemper (as Professor Sam Houston Jones, a genial medicine show proprietor), and Ed Begley.  Perhaps the weakest performance is by James Mitchell as young Doc Harris, and he’s not bad. 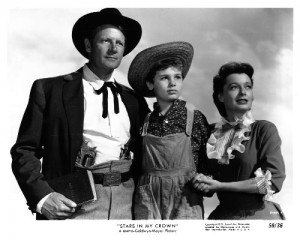 The preacher and his family:  McCrea, Stockwell and Drew.

The pacing in the film is slightly leisurely at only 89 minutes, but it matches well with the subject matter, giving relationships and issues time to develop.  If anything, it could be a bit longer.  French director Jacques Tourneur (Out of the Past, perhaps the greatest film noir ever made, and the gothic classic Cat People) was at the peak of his game.  He and McCrea would make a couple more westerns together, although they’re not as good as this one:  Stranger on Horseback (1955, with McCrea as a circuit-riding judge) and Wichita (also 1955, with McCrea as Wyatt Earp).  As with McCrea, this was said to be Tourneur’s favorite of all his films.  The titular hymn “Will There Be Any Stars in My Crown?” works well in this film, as do “Beulah Land” and “Come Thou Fount of Every Blessing” near the end.  It’s good to hear those instead of the over-used “Shall We Gather at the River” (John Ford’s favorite for such films) although there are some strains of that one, too.  It’s based on a novel by Joe David Brown, shot in black and white.  It’s an underappreciated gem in its quiet way, a forerunner of such more celebrated films as To Kill a Mockingbird.

The film was respectably profitable in its time although not a blockbuster, making about $225,000 in profit.  By some definitions, this may not actually be a western, since there are no Indians and the town seems somewhat established if not large.  Much of Tennessee was rural, but not exactly western after the Civil War.  But it has Joel McCrea, guns and cowboy hats in the 19th century.  This was apparently Alan Hale’s last movie.  James Arness (uncredited, as the oldest of the Isbell sons) and Amanda Blake, yet to star in television’s Gunsmoke, are bit players in this one.  It has been available in remastered form on DVD since 2011.