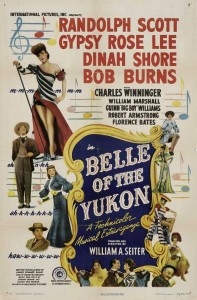 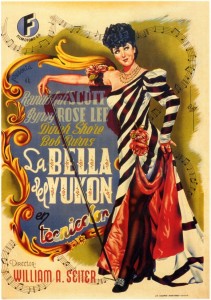 This as much a musical as a western, with new songs by Jimmy Van Heusen and Johnny Burke, often sung by a young and dark-haired Dinah Shore.  As the title suggests, this takes place during the Canadian Gold Rush, mostly in a saloon, in the isolated city of Malamute.  This was two years after Randolph Scott played a con man in a northern gold rush in The Spoilers (1942), and in his return he is apparently again a con man as Honest John Calhoun, owner of the largest saloon in town.

It’s not just the name; he has taken pains to establish a reputation for honesty, turning down offers from George (Robert Armstrong), a more corrupt gambler, to set up games more explicitly rigged in the house’s favor.  As the movie opens, a boatload of new female entertainers from Seattle led by Belle de Valle (Gypsy Rose Lee) show up to supplement the singing of Lettie Candless (Dinah Shore), daughter of Honest John’s manager Pop Candless (Charles Winninger).  Belle and Honest John had some history back in Seattle, where he was more obviously a con man, then known as Gentleman Jack. 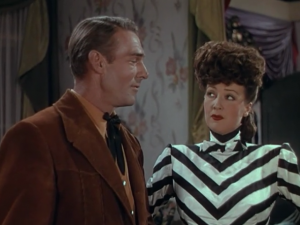 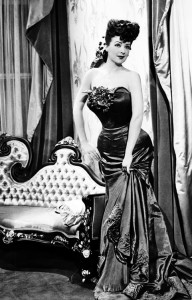 The relationship between Belle and Honest John rekindles.  Lettie has her own relationship with Steve Atterbury (blonde William Marshall), who may or may not already be married, and also appears to be wanted by the Seattle police.  Honest John keeps trying to get him out of town so the Seattle police won’t arrive and take him and others in his employ into custody as well.  Young love keeps messing up his attempts.  Honest John also employs a professor (Victor Kilian) who purports to be able to predict when the harsh northern winter will set in.  He starts a bank to hold the gold produced by betting on the professor’s report, and it becomes a magnet for those who want to rob it, especially George and the sheriff, Mervin Maitland (Guinn “Big Boy” Williams).

Thereafter there are several currents running through the story.  (1) Is Honest John really honest now, or is he just running another scam?  (2) If it is a scam, is he scamming George and Mervin, or everybody?  (3)  Will Honest John be honest with Belle, or will he break her heart again, as he did in Seattle?  (4)  What is Steve Atterbury running from, and will young love win in the end?  Most of those questions you could answer without even seeing the movie.  The way they’re answered in the movie doesn’t always make sense. 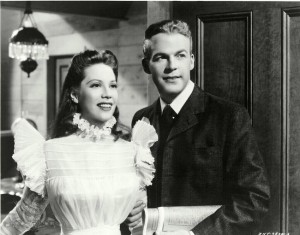 It’s pretty light stuff.  Some say that Gypsy Rose Lee can’t act, but she certainly has a presence.  She and Dinah Shore wear some of the smallest-waisted costumes on film, obviously with the help of corsets.  And they are elegant costumes, with the exception of one dress worn by Shore on stage which looks like she has on a long-sleeved black T-shirt under the dress.  Randolph Scott is good as Honest John Calhoun, with enough of his usual rectitude to make you think he could be honest, and with enough charm so you’d forgive him if he isn’t.  There doesn’t seem to be much heat in the rekindled romance between Belle and Honest John.  Bob Burns plays a con-man subordinate of Honest John who repeatedly gets the better of Sheriff Mervin, both played for comic relief.  While it’s not clear that this is entirely a “western comedy,” it certainly has a number of comedic elements.

In color, so it had a good budget in 1944, when color westerns were still quite rare.  It’s short, at 83 minutes, and quickly paced, so you don’t have much time to think about the plot.  The screenplay is by James Edward Grant (Angel and the Badman), a favorite writer of John Wayne.  Dinah Shore sings “Like Someone in Love” and “Sleigh Ride in July,” which both became popular generally and were covered by such other singers as Bing Crosby.