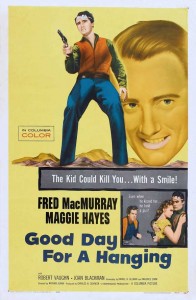 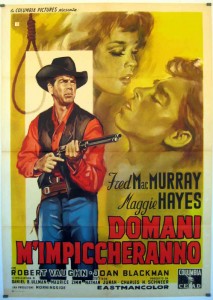 It’s been more than twenty years since Ben Cutler (Fred MacMurray) wore a lawman’s badge.  He’s now a widower in Springdale, in small-town rural Nebraska, with an almost grown daughter (Joan Blackman), and engaged to Ruth Granger (Maggie Hayes), a widow with a growing son.  When the town bank is robbed, Ben drops one of the bandits with half the loot and joins the posse chasing them out of town.

As the bandits take brief refuge in some rocks, they return fire on the posse, killing aging Marshal Hiram Cain (Emile Meyer, the range baron in Shane).  When Ben sees Cain fall, he gets another of the bandits while the rest make their escape.  The posse takes young Eddie Campbell back to town with a head wound that doesn’t seem to be too serious.  He’s a local boy with a slick lawyer, and Ben’s daughter Laurie is increasingly infatuated with him, even though the young local doctor (James Drury) is also trying to get her attention. 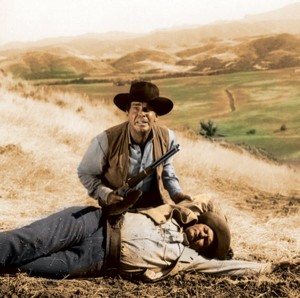 When the town asks him to take Cain’s place as marshal, he does.  Campbell has a good lawyer with political ambitions, obviously paid for by the outlaws using the bank loot.  During the trial, Campbell’s lawyer manages to shake most testimony about seeing Cain get shot, but not Ben’s.  Campbell is convicted and sentenced to hang based largely on Ben’s testimony as a witness of the event.

Most locals feel the sentence is too harsh, but Ben feels obligated to carry it out.  As the hanging approaches, Laurie is caught smuggling a derringer to Campbell.  Public opinion, and that of his own daughter and fiancée, turn against Ben.  The only ones who still believe in him are Maggie’s young son Mitch and Cain’s elderly widow.  The town council gets a petition for clemency for Campbell and asks Ben to take it to the governor, who knows him.  While he’s gone, his deputies get drunk and Campbell’s confederates manage to spring him from jail, wounding the doctor. 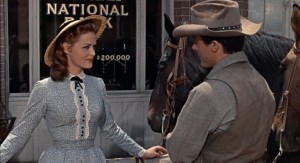 As Ben returns to town with the governor’s commutation of Campbell’s sentence, he gives back the badge, feeling he no longer has public support.  He steps into the middle of a shootout, as the outlaws try to get out of town.  He gets two of them, but Campbell takes refuge in the adjacent livery stable.  During the extended gunfight, Laurie warns Ben as Campbell steps out behind him.   Campbell is wounded but makes a break for it and returns fire on Ben.  Ben finally gets him, symbolically enough, on the platform of the gallows on which he was to hang.

The town council wants him to take back the badge, and with a minimum of discussion he does.  All is forgiven, apparently, and Ben’s daughter and fiancée come back to him. 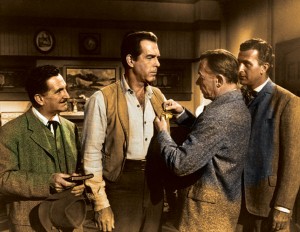 Obviously, this is one of those westerns from the 1950s, like High Noon and The Tin Star, that is concerned with the relationship between the town and its lawman.  The story is told well enough that the viewer is not entirely sure of the degree of Campbell’s guilt until the end; it all depends on how much you trust Fred MacMurray.  This is, after all, the solid and dependable father-figure Fred MacMurray–not the weaselly one from Double Indemnity or the unrepentant outlaw from The Moonlighter.  The end is abrupt and not entirely convincing; it feels like more reconciliation is necessary among several characters and with the town in general.  This is similar in many ways to MacMurray’s At Gunpoint, in which he is not a lawman but a shopkeeper unskilled with guns who manages to get an outlaw during a robbery.  But the town doesn’t like the results of that, either.  It also has similarties in theme to The Fastest Gun Alive.

The resolution may be abrupt, but this is a watchable western.  The fiancée Ruth never comes alive, and the daughter Laurie seems impenetrably stupid for much of the movie.  But MacMurray as Ben always seems reasonable and right.  In color.  Short, at just 85 minutes.