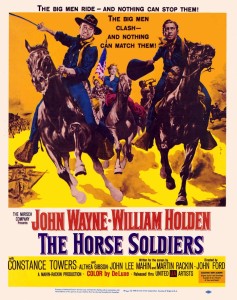 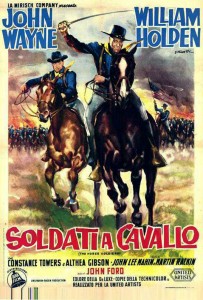 Not exactly a western, since it takes place entirely in Mississippi during the Civil War.  But it stars John Wayne and William Holden riding horses and fighting battles, and it’s directed by John Ford.  So the western genre seems to be where it fits most comfortably—specifically, it’s a cavalry western.

Gen. U.S. Grant has besieged Vicksburg on the Mississippi River but not yet taken it, so that puts the time of this story in the first half of 1863.  Grant calls in cavalry Col. John Marlowe (John Wayne) and gives him the assignment of destroying supplies and railroads to the south in Newton Landing, between Vicksburg and Baton Rouge.  Marlowe’s officers include Col. Phil Secord (Willis Bouchey), an older man from Michigan with political ambitions, and Maj. Henry Kendall (William Holden), a surgeon who is almost instantly at odds with Marlowe. 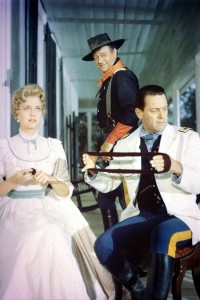 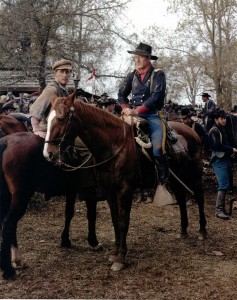 Hannah Hunter, Marlowe and Kendall at Greenbriar; Marlowe with one of his scouts.

Heading south and trying to keep the Confederates in ignorance of their whereabouts and objectives, the cavalry stops at the plantation of Greenbriar, run by Miss Hannah Hunter (Constance Towers).  She receives them hospitably, given that her sympathies are southern, and discovers that they plan to destroy the supplies at Newton Landing and then head for Baton Rouge.  Kendall finds Hannah and her slave Lukey (Althea Gibson) listening, and Marlowe is forced to take them along so his plans are not prematurely revealed.  Hannah’s attempts to escape and hostility to the Yankees provide another source of tension within the column.

Hannah Hunter:  “They’ll catch up to you and cut you to pieces, you nameless, fatherless scum.  I just wish I could be there to see it!”

Col. John Marlowe:  “If it happens, Miss Hunter, you will be.” 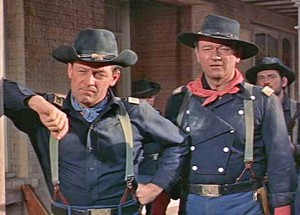 Trying to figure out why the Confederates aren’t putting up more resistance.

As they move toward Newton Landing, Marlowe’s men discover a couple of Confederate deserters (Denver Pyle and Strother Martin), whom Marlowe lures into giving information on Confederate units in the area before he turns them over to the southern sheriff.  At Newton Landing, there are a few Confederate soldiers led by a one-armed Col. Jonathan Miles (Carleton Young), known to Kendall from their days fighting Indians out west.  It turns out Miles has telegraphed for reinforcements, and when those additional men arrive on a train, Marlowe’s men are reluctantly forced to fight a battle. The Yankees win handily before destroying the supplies and railroad, which pains the one-time railroad worker Marlowe.  When the Confederate army asks a local military school to send its young men into battle, led by their reluctant headmaster/minister (Basil Ruysdael), Marlowe and his men are forced to leave the field rather than shooting them down, once more demonstrating Marlowe’s comparative humanity.  The political Col. Secord continually gives poor and self-aggrandizing advice, and when Marlowe takes to referring to Kendall as “Croaker,” Kendall responds by calling Marlowe “Section Hand.”

Col. John Marlowe [during firefight]:  “I didn’t want this. I tried to avoid a fight!”

Maj. Henry Kendall:  “That’s why I took up medicine.

With Nathan Bedford Forrest’s Confederate cavalry on their heels, they move south toward Baton Rouge, only to find their way blocked by another Confederate unit at a bridge about 40 miles from their destination.  Hannah’s slave Lukey is killed by the initial Confederate attack.  Meanwhile, Marlowe and Hannah get to know each other better as Hannah nurses Marlowe’s wounded men with Kendall and sees that Marlowe cares about his young wounded soldiers.  His hostility to doctors is rooted in the period before the war, when he was a young railroad section hand and his wife was killed by a medical mistake.  Marlow’s cavalry finds a way to ford the river and flank the blocking Confederates while their attention is fixed on a direct charge across the bridge.  Marlowe takes a leg wound, which Kendall binds up. 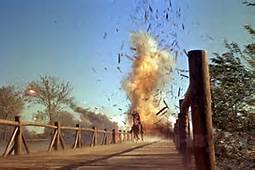 The Colonel lights the fuse and dashes across the bridge.

Marlowe has to blow up the bridge so Forrest can’t follow him so closely.  He is the last across the bridge and tells Hannah he loves her, taking her bandanna for a neckerchief.  He barely makes it across the bridge, leaving Kendall and Hannah tending the wounded and Kendall presumably bound for captivity in Andersonville prison in Georgia.  Marlowe and Kendall are to some degree reconciled, with some mutual respect at the end.

Director Ford does well in managing his large cast and the action in this film.  There are typical Fordian touches, such as the opening shots of a column of cavalry riding along railroad tracks against the sky and supposedly singing a Civil War song over the initial credits.  There are the low-angle shots of cavalry riders as they charge across the bridge.  The story is based on an actual historical incident from the Civil War:  Grierson’s Raid, from Legrange, Tennessee, in April 1863, led by Col. Benjamin Grierson.  Grierson was a music teacher who was afraid of horses because one kicked him in the head as a child.  Joining the Union army to fight slavery (he was a staunch abolitionist) he wanted infantry duty but was assigned to the cavalry by mistake.  He turned out to be good at it and stayed in the cavalry after the war, becoming the first Colonel of the 10th Cavalry (buffalo soldiers).  It’s unclear why the names are changed, but presumably it was to give the writers and director greater freedom to deviate from the real historical events.  There probably wasn’t much of a love story involved in the real raid, nor such animosity with the regimental doctor. 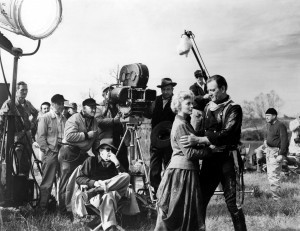 John Ford directs Wayne and Towers in an intimate scene.

Overall, the film seems to take an anti-war stance.  The movie takes an interesting attitude toward southerners and their slaves.  It does not condone slavery, but it shows close relationships between owners and slaves, as with Hannah and Lukey.  It seems sympathetic to the Union side generally, but it does not shy away from showing nobility in southerners in a way that now seems slightly old-fashioned (the sheriff to whom Marlowe turns over the deserters, the military school headmaster and his charges, the courtliness of Forrest in offering medical assistance to Kendall at the end, for example).  In modern times, when there can be no cinematic tolerance at all for slavery, it could probably not be done this way, although arguments could be made that Ford’s approach is historically accurate or defensible.  The incident with the two Confederate deserters is reminiscent of several situations in Cold Mountain (2003).

This is one of Ford’s last movies and not, perhaps, among his very best, although it is still a very good western.  There are a host of Ford’s usual character actors, such as Strother Martin, Hank Worden and his son-in-law Ken Curtis in one of his better performances, but there is no Ben Johnson or Harry Carey, Jr.  1920s cowboy star Hoot Gibson shows up in a small role as a Union sergeant in his penultimate movie.  (His last appearance was as an uncredited deputy in Ocean’s Eleven.)  1950s African-American tennis star Althea Gibson appears as Lukey.  Judson Pratt is good as Marlowe’s hard-drinking Sergeant-Major Kirby, the sort of role in which Ford once would have cast Victor McLaglen.  This is one of three Civil War cavalry movies for William Holden, along with Escape from Fort Bravo (1953) and Alvarez Kelly (1966).  He was drinking heavily at the time and during production broke his arm falling off a bridge.

Strother Martin on working with John Ford:  “I did a tiny bit in The Horse Soldiers (1959) first, and that’s when I met him; and he liked me, I guess.  Ford said to somebody I knew, ‘I’ve got to get something else for that Stuffer.. Smucker… Stoofer… whatever the hell his name is,’ and he put me in The Man Who Shot Liberty Valance (1962).” 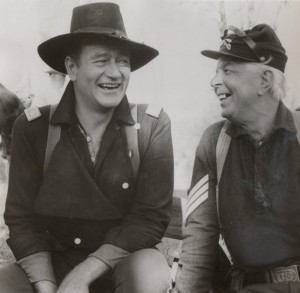 John Wayne and Hoot Gibson trading stories behind the scenes.

Constance Towers, who otherwise didn’t have much of a movie career, appears in one of her two Ford movies (along with Sergeant Rutledge), with her curiously 1920s-style looks.  Gen. U.S. Grant, appearing briefly at the start of the movie, is played by songwriter Stan Jones, who composed the movie’s featured song “I’ve Left My Love” which plays over the opening credits and elsewhere in the film and three years earlier had written “The Song Of The Searchers,” sung by the Sons Of The Pioneers over the titles of the The Searchers (1956).

Cinematography is in color by William Clothier.  The film was shot on location in Mississippi and Louisiana, giving it an authentic look.  Screenwriters were John Lee Mahin and Martin Rackin, based on a novel by Harold Sinclair.  The score is by David Buttolph, with the title song by Stan Jones. 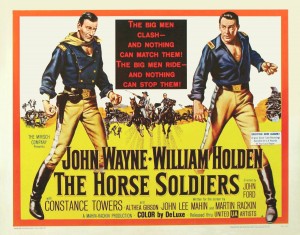 The film marked the beginning of mega-deals for Hollywood stars.  John Wayne and William Holden received $775,000 each, plus 20% of the overall profits, an unheard-of sum for that time.  The final contract involved six companies and numbered twice the pages of the movie’s script.  The movie was a financial failure, however, with no profits to be shared in the end.