Butch Cassidy and the Sundance Kid on Film 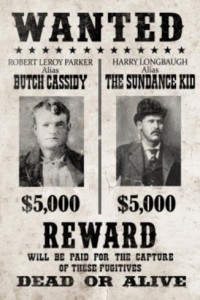 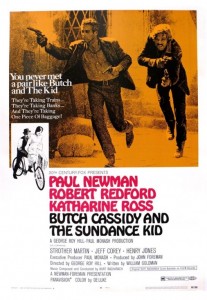 Of course the best known version of the famous outlaws on film is 1969’s Butch Cassidy and the Sundance Kid, written by William Goldman and directed by George Roy Hill.  This film established them as attractive Robin-Hood-type, not-so-bad outlaws just as the Old West was passing, an image which has considerable basis in history.  Prior to that time, when they appeared in films it tended to be as regular outlaws notable mostly for their colorful names, appearing only incidentally in movies where they were not the principal characters.  After 1969, there have been several less successful attempts to recapture the magic of Newman and Redford as Butch and Sundance.  Katharine Ross even reprised her role as Etta Place in a made-for-television movie (The Sundance Woman, 1976).  Other than the 1969 classic, perhaps the most successful cinematic use of Butch and Sundance was in 2011’s Blackthorn, in which Sam Shepard is an aging Butch Cassidy in Bolivia, contemplating a return to the U.S. in the 1920s.

Return of the Gunfighter (John Crawford and John Chandler Davis, 1967) 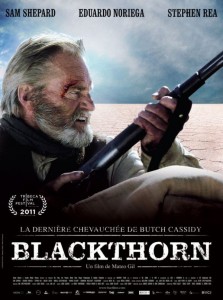 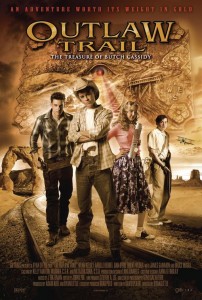 Set in 1951 in Utah, this modest film is based on the premise that (a) Butch and Sundance weren’t killed in Bolivia in 1908, and (b) Butch brought back some kind of gold treasure from South America and stashed it somewhere around his boyhood home in Circleville, Utah.  Ryan Kelley plays a young Indiana Jones-type role as Roy Parker, a great nephew of Robert LeRoy Parker, who wants, among other things, to rehabilitate Butch’s historical reputation.  Bruce McGill is Garrison, a nefarious local museum director after treasure and supposedly a son of Etta Place.  He and his henchmen chase Roy and friends in pursuit of the lost treasure around various scenic spots in Utah, including rivers and moving trains.  James Gammon plays Sam Parker, Roy’s grandfather and a younger brother of Butch.  Shauna Thompson is Roy’s widowed mother Lorraine.  Arielle Kebbel is Ellie, new blonde girl in town.  In the end, Roy Parker meets his grandfather’s brother, Robert Leroy Parker (Butch Cassidy, played by James Karen), now going under the name William Phillips in Washington.  Better than one would expect, although some complain about the ending.  A little fast and loose with some of the facts:  William Phillips of Spokane almost certainly wasn’t Butch Cassidy, and he’d died in the 1930s in any event, not living until 1951.  Directed by Ryan Little (Saints and Soldiers) on location in Utah (Provo Canyon, Bryce Canyon, the Heber Creeper).

This was a failed television pilot set for 2004 but aired only in 2006; hence the apparent occasional breaks for commercials.  It was the last “movie” scored by Basil Poledouris, who had done the music for Lonesome Dove and Quigley Down Under.  The leads, young Butch Parker/Cassidy (David Clayton Rogers) and Harry Longabaugh (Ryan Browning) are both personable and well differentiated.  Etta Place (Rachelle Lefevre, who played renegade vampire Victoria in New Moon) has a red-headed spark, and a relationship with both men.

Since it was made as a pilot, there were some liberties taken with history in this set-up to leave writers of future episodes with lots of potential material.  Michael Biehn is the biggest name in this; he plays young Butch’s outlaw mentor Mike Cassidy.  It makes the Wild Bunch and the Hole in the Wall gang seem like separate entities, which they weren’t.  Shot in Alberta.