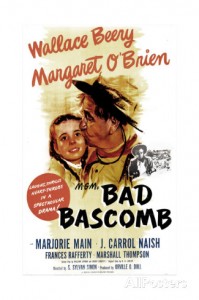 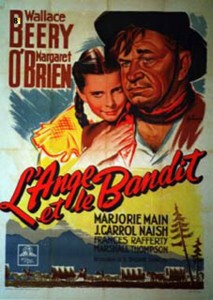 Wallace Beery is the eponymous Zeb Bascomb, leader of an outlaw gang, in this blatant attempt to recapture the sentimentality of his earlier hit with Jackie Cooper, The Champ (1931), which had been in turn a variation on Charlie Chaplin’s sweeter The Kid (1921)–a societal outcast is reformed or saved by the love of a child.   In other ways it uses story elements from the 1940 western Wyoming, in which Beery plays a nasty military deserter who ends up helping the good guys in a range war.

Shortly after the Civil War, Bascomb and his gang try to rob a bank, only to run into a trap with law officers waiting for them.  Pursued by a posse, Bascomb, Bart Yancy (J. Carroll Naish) and young Jimmy Holden (William Marshall) escape and join a Mormon wagon train headed for Utah.  There is gold hidden on the train, and eventually Yancy finds it.  The plan is to take the gold and flee.

However, by now Bascomb, going by the name Zeke Smith, has formed a relationship with nine-year-old Emmy (Margaret O’Brien), a member of the lost (and particularly clueless) Mormon wagon train.  And Bascomb further becomes romantically entangled with Emmy’s grandmother Abbey Hanks, played by Marjorie Main.  As the head elder lies dying, he entrusts leadership of the wagon train to Bascomb and makes him promise to get them through to Utah.  Yancy is disgusted and leaves to see if he can find more reliable allies. 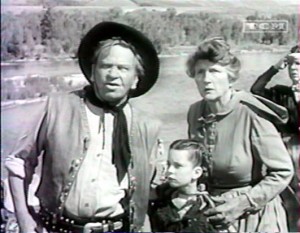 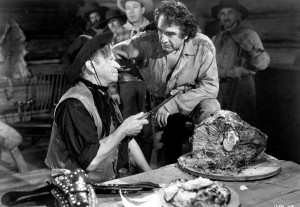 Bascomb (Beery) and Bart Yancy (J. Carroll Naish) have a difference of opinion.

As the wagon train encounters hostile Indians, egged on by Bascomb’s now-former associate Yancy, Bascomb directs the set-up of the defense and rides off 40 miles to seek help from the cavalry.  (That’s an obvious double doing all the hard riding on film for the 61-year-old Beery.)  He fights off Indian attackers in his desperate ride, and meanwhile the wagon train is attacked.  The defense is led by Bascomb’s young (outlaw) associate Jimmy Holden, who has come to fancy one of the young ladies in the wagon train and, like Bascomb, is forsaking his outlaw ways.

In the end, after rescuing the wagon train, the reformed Bascomb rides off with the federal officer to face the music for his life of crime.  Even the love of a child can’t save him from that.  In the 1940s and 1950s, outlaws had to be shown receiving the consequences of their crimes and seldom were allowed to just change their ways and get away with it. 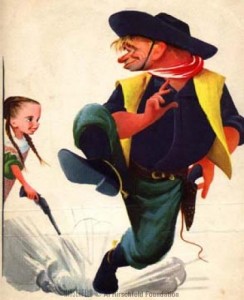 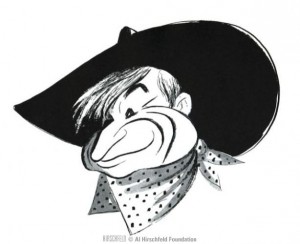 Al Hirschfeld caricatures of O’Brien and Beery and of Beery by himself.  His characters don’t usually smile, contrary to what both of these seem to show.

Wallace Beery had had a long and successful career as a bad guy (see him as Magua in the 1920 Last of the Mohicans, for example), and, surprisingly, as a rough-hewn not-really-so bad guy with a heart of gold.  He was a big star in his time, even though he obviously lacked matinee-idol looks.  By most accounts, Beery was not as nice to work with as the characters he portrays on screen, especially for child actors; he had all the coarseness his characters usually do, without the heart of gold.  Margaret O’Brien claimed that she had to be protected by crew members from Beery’s insistence on constantly pinching her.  He and Marjorie Main were paired in a number of movies beginning around 1940 (Wyoming), as Beery had been with Marie Dressler in the 1930s.  Bad Bascomb was one of Beery’s last five movies.  It was kind of an old-fashioned film even in 1946; Beery died three years later in 1949.  For current audiences, all the bonding with young Emmy can seem slow and cloying; others find it heart-warming, as the filmmakers intended.  This is interesting as a cultural artifact, a sort of film that isn’t made now.  Use it as a test, to see if you can get into the mindset of an earlier generation of filmgoers from almost seventy years ago.

You might see this as similar in theme to Angel and the Badman, made a year later in 1947, where an outlaw is reformed by his love (fatherly in this case, rather than romantic, as in Angel) for a young religious female.  It is also said that Bascomb inspired Anthony Mann in making one of his own westerns taking a Bascomb theme (bad guy-fugitive seeks refuge in/leads wagon train) in 1954’s Bend of the River. The opening scene of Bend of the River pays homage to Bad Bascomb by having James Stewart ride up to a wagon and receive a piece of food from a little girl. Some say that more than twenty years later in the original True Grit, John Wayne was channeling Wallace Beery as Rooster Cogburn, and winning his only Best Actor Oscar for it.  In black and white, at 112 minutes.  Filmed on location in Jackson Hole, Wyoming.